by Simon Thomas
published: 1 May 2008 in Opera and Classical Reviews
Tweet 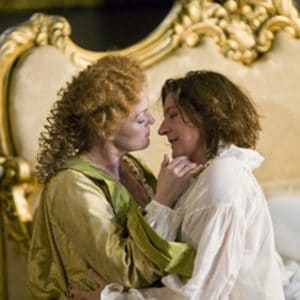 David McVicar’s much-feted Scottish Opera production of Strauss’ romantic comedy arrives in London, with all the sophistication and subtlety expunged from one of the finest opera libretti ever written. This may be as strong a homegrown cast as one can imagine but, with John Tomlinson’s blustery Ochs just about the most refined part of the evening, there are serious problems of contrast and balance.

McVicar has many times launched assaults on traditional values, usually in much more radical ways than this and often with spectacular results, but here it bears no fruit in terms of fresh insights. It feels much of the time as though he’s embarrassed by the tenderness of emotions expressed. The single set running through the opera screams of low budgets and denotes a levelling of the social strata that librettist Hofmannsthal so beautifully delineates. The aristocratic Marschallin, her bumptious country cousin Ochs and the nouveau riche Faninal are peas in a pod, bound by crassness and vulgarity.

An impoverished Marschallin resides in a villa with a serious case of rising damp and a misshapen mirror with gold leaf scuttling across it like a whole flock of flying ducks. Only a small step more distasteful is the bourgeois upstart Faninal’s newly-acquired palace with the same stained walls and garish great globs of gold, previously seen leaking ominously round the proscenium, now cascading down them like melting wax. We don’t of course see Baron Och’s home but I have a sneaking feeling it wouldn’t look a lot different.

What’s happening onstage is reflected in the orchestra’s performance in the pit, under Edward Gardner’s guidance. There’s plenty of Tiggerish bounce and attack but it sounds too much of the time like a brass band playing while skating en masse across a frozen lake, and it’s only in the final trio and duet that they find anything resembling finesse. The height of barbarism is reached with Janice Cairns’ grotesque and expressionistic duenna, mugging and gesticulating as though she’s auditioning for a particularly over-the-top production of Elektra.

There’s a nice Hogarthian feel in the invasion of the Marschallin’s boudoir by hairdressers, monkey-sellers and begging orphans. Alfie Boe, a late replacement as the Italian Singer, vies for attention amidst all the fussing, primping, bickering and bargaining, with a light but incisive account of the tenor aria.

The three female leads could all surely have done much better than this. Janice Watson never rises to the status heights that she should and fails to capture the emotional depths of a woman realising her best days are slipping away. She turns on Ochs in Act 3 with an almost spiteful anger which completely undermines her urbane superiority. Sarah Connolly’s Octavian is a sturdy lad but bland. Strapping too is the Marschallin’s page “boy” Mohamed, a grown man who lumbers around in direct contradiction to Strauss’ music. Sarah Tynan sounds and looks pretty enough as Sophie, although she’s hampered by unflattering costumes and a poodle-like creation on her head.

Tomlinson never reveals the nobility that lurks under Ochs’ boorishness but it’s a finely-detailed and comic portrayal mirrored by Andrew Shore’s more than usually characterised Faninal. Overall though, this is a big disappointment, smacking – I hate to say it – of provincialism and paucity of ideas. ENO and the public deserve a much better new revival of Rosenkavalier than this and so does David McVicar’s reputation.