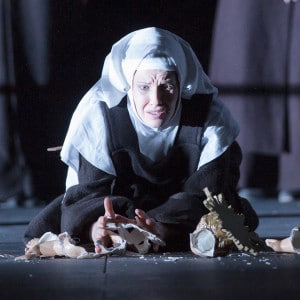 Poulenc’s Dialogues des Carmélites hardly goes at a breakneck speed but, rather in the same way as Tristan und Isolde and Parsifal do, it keeps us gripped from start to finish. True, there are turning points and moments of high drama, but for vast swathes of time it is the characters’ philosophising and the nature of the music which are responsible for holding our attention.

The secret to Robert Carsen’s production, which is new to the Royal Opera though it was created for Dutch National Opera in 1997, is that it works perfectly with the natural pace of the piece. It is not unusual to describe a set as boxlike, but this usually refers to the walls running at an angle to make the stage smaller at the back to draw the eye in. Michael Levine’s set, however, is a genuine box that takes up the entire space of the Royal Opera House stage and sees all corners running at right angles.

The staging is Spartan in style, and the only thing that ever really fills the vast space is the people. The first scene sees Blanche, her father and her brother interact surrounded by a huge crowd. When we then move to the convent the only alteration to the ‘scenery’ is the mass exodus of these people to leave a small band of nuns on a far more bare stage. Throughout, the movement is subtle yet effective so that when the Prioress dies, she is surrounded by nuns lying prostrate on their fronts, their arms outstretched. This is a position of devotion and penitence, but it could also represent angels, while the image also finds a haunting parallel in the final scene.

The most notable feature of the revolutionary crowd is that, far from mounting barricades or running riot, we never see them move at more than a sedate pace. In the first scene, it is the sheer number of people on stage that suggests agitation is in the air, and throughout the crowd’s character equates revolution with weariness, disillusionment and desperation rather than glory. One particular coup sees everyone cross the stage so tightly packed that it is only after they have departed that we realise they have left a trail of destruction in the form of overturned tables in their wake.

Jean Kalman’s lighting designs are excellent, but light proves an important feature of the production in other ways as well. The nuns sport black and white habits delineating their understanding of the difference between good and evil. Everything around them, however, is grey, showing how the wider world is not so simple and straight forward, and introducing ideas of doubt and insecurity. At the opera’s climax the nuns’ white habits radiate out against a backdrop of bodies dressed in muted colours but, prior to this, so too do these same people’s hands and faces against their own clothes.

Sir Simon Rattle’s conducting is exceptional, while the evening is filled with an abundance of brilliant performances. Sally Matthews as Blanche gives a very multi-faceted performance, and at all times her soprano is imbued with a tangible sense of vulnerability. She brings a soaring purity to her upper register, an intriguing starkness to her lower register, and she uses her vibrato intelligently to produce a more resonant sound.

Another standout performance comes from Deborah Polaski as the Prioress, who with her wonderfully rich soprano remains both captivating and convincing throughout the scene where she searches her soul to its very depths, and undergoes a long and difficult death.

The nuns themselves, the majority of whom are made up of members of the Royal Opera Chorus, are also highly impressive. Their choral singing is beautiful and precise, and never does it seem as if we are merely staring at a set of singers who have been carefully arranged on a stage. It really feels as if this group of nuns is made up of individuals who know each other intimately, having spent so many years together, and are now braving their horrendous ordeal together. The final scene of execution proves all the more powerful for being slightly understated, and for anyone lucky enough to witness it, it will surely stay in their memory as one those truly great moments in the opera house.