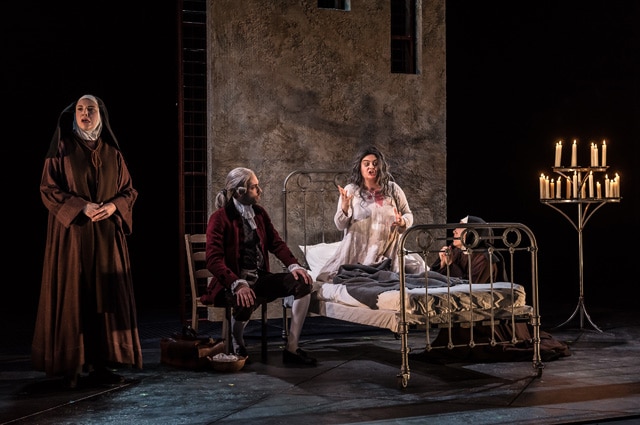 Martin Lloyd-Evans’ production of Poulenc’s Dialogues des Carmélites for the Guildhall School of Music and Drama achieves an aesthetic that works perfectly with the tone of the piece. The monochrome, minimalist sets by takis not only say something about the pious lives of the nuns, but work with music that, although conveying moments of high drama, is generally meditative in tone as it complements the characters’ philosophies.

The black stage is filled with little more than a series of planes, some of which constitute metal grids and the remainder rough plaster walls. These descend and slide into different formations for each scene, as they hint both at a physical space, such as Le Marquis’ home in Compiègne, and the level of freedom that is afforded at that moment. For example, the convent generally feels more enclosed, but when Blanche first meets Le Prieure and later sees her brother there, the hanging metal grid signifies the formal barrier placed between the respective figures in each instance.

In some ways, the presentation style is not so different from that to be found in Robert Carsen’s production, which first appeared at the Royal Opera House in 2014, and featured a box-like set and black, white and grey shades. Carsen, however, filled more scenes with people as the opening saw a huge crowd surround Blanche, her father and brother, and Le Prieure died surrounded by nuns lying prostrate on their fronts. In keeping with this, the revolutionary crowd that was seen never moved at more than a sedate pace as its disposition seemed to equate revolution with weariness, disillusionment and desperation rather than glory. 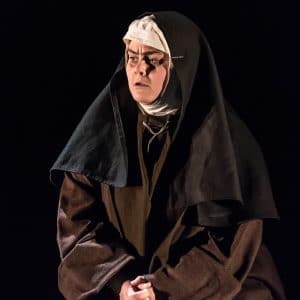 Lloyd-Evans, however, takes an even more Spartan approach by focusing the scenes entirely on the individuals required to be present. He is, in a way, simply obeying the original, as it was Carsen who embellished certain scenes with extra figures to fill the larger stage. Nevertheless, the way in which everything here is pared down to an absolute minimum (an overturned candelabra and bench are all that are required to depict a ransacked convent) does seem to represent a conscious aesthetic choice. As the nuns sit in a row with their backs to us listening to La seconde Prieure, they look just like a painting by Francisco de Zurbarán. This Spanish artist’s chiaroscuro pictures tied in with the ‘black and white’ philosophies of many religious orders as they implied that one either is or is not in God’s presence. Robbie Butler’s lighting also plays a major role in generating this image, and in Act III light shoots up from below the stage with the grid on the floor fracturing it as it rises.

The orchestra, under the baton of Dominic Wheeler, gets the full measure of Poulenc’s intriguing and enigmatic score, while from among the good cast several performances stand out. As Blanche, Lucy Anderson has excellent presence, and ensures that her performance provides a strong centre to the evening. Her soprano also interacts well with that of Claire Lees as Sœur Constance, whose own conveys all of the character’s youthful vivacious, innocence and fear. Georgia Mae Bishop as Le Prieure delivers a stunning death scene as her impassioned mezzo-soprano generates a real feeling that she is searching her soul to its very depths. When we are used to the part being played by the likes of Deborah Polaski, we realise just how great an achievement it is for one so young to remain this powerful and convincing over such a sustained period.

Michelle Alexander as La seconde Prieure reveals a very full and well developed soprano, while Chloë Latchmore as Mère Marie displays not dissimilar qualities in her mezzo-soprano as she also shows the character’s sensitivity in subtle ways. As she watches Le Prieure die, the fact that she appears ashamed and unsympathetic derives not from a hard heart, but from an inability to face all that this virtuous person’s difficult and undignified death might signify. It would be a shame to give away how the ending is presented, but, following the tone of the production as a whole, excellent lighting combines with simple yet effective staging to create an exceptionally moving finale.

Casts vary over the run. For full details visit the Guildhall School of Music and Drama website.