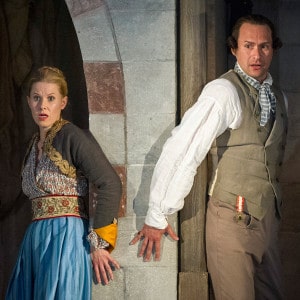 To set an 18th century opera in that time, in the place originally intended and with historical veracity and a complete absence of anachronism, is a revolutionary act. Why are Belmonte and Pedrillo not roaring around the stage on a motorbike? Why are Constanze and Blonde not clad in leather bondage gear? Because David McVicar, directing his first Mozart for Glyndebourne, understands that this work, written when the composer was only 25 and at a time when all things Ottoman were very much in vogue, needs a straightforward, faithful interpretation which focuses on the presentation of character and atmosphere. He scores a huge success in providing just that.

Getting the casting right is more than usually crucial in this opera, since the music for the two principals demands not only the highest levels of vocal agility and control of breath and pitch but creating characters who can be less than engaging if under-directed. Happily, McVicar had in Edgaras Montvidas and Sally Matthews a Belmonte and a Constanze able to negotiate the sometimes terrifying music yet shape the lines with heartfelt expression. Montvidas began rather nervously – who wouldn’t, given the nature of Belmonte’s first phrases – but went on to give nuanced accounts of O, wie ängstlich and Ich baue ganz. McVicar’s characterization of him as a squeamish dandy who reveals a romantic soul tormented by undying love was completely appropriate and made a real person out of a character who can often seem sketchy.

Sally Matthews has a touching vulnerability in her tone and manner, allied to a steely resolve – both attributes ideal for Constanze, and her singing of Ach, ich liebte was as tender as her Martern, aller Arten was determined. Constanze’s music is amongst the most challenging Mozart ever wrote, and the latter aria provides sopranos with the chance to display their range and techniques; Matthews negotiated those daunting arpeggios with seeming ease whilst revealing both her character’s devotion to her beloved and her fear of what might be about to pass.

Their ‘comic doubles’ – their Papageno and Papagena – were wonderfully characterized and finely sung by two young artists making their house debuts. Brenden Gunnell was a funny, appealing Pedrillo, singing with bright, vibrant tone, and Mari Eriksmoen an adorable Blonde. Durch Zärtlichkeit was persuasively sung in an hilarious kitchen scene with another Glyndebourne debutant, the superb bass Tobias Kehrer whose Osmin had not only sonorous low notes but a genuine comic presence.

The role of Pasha Selim, the enlightened captor who has to master not only his passion for Constanze but his initial desire for revenge against Belmonte’s father, was brilliantly taken by the versatile French actor and dancer Franck Saurel. Adrian Richards’ Mute was poetically expressive – when either one of these actors was on stage, the eye was always drawn to them. The chorus was just as engaging, Jeremy Bines having obtained the customary precision and liveliness from these young singers.

Robin Ticciati and the Orchestra of the Age of Enlightenment gave an eloquent, loving account of the score, effervescing with youthful life in the faster sections and allowing the savouring of Mozart’s ecstatic phrases in the slower ones. The composer’s comments to his father in a letter of 1781, concerning the composition of O wie ängstlich – “…you see how his throbbing breast begins to swell; this I have expressed by a crescendo. You hear the whispering and the sighing –which I have indicated by the first violins with mutes and a flute playing in unison…” came swiftly to mind when that music was heard, and for the entire evening one felt that the orchestra was just as faithful to Mozart’s intentions.

The production was equally faithful, and the rousing cheers for the director and his team at curtain call – a rare experience these days – showed just how much this was appreciated. Whenever one praises this kind of traditional – for want of a better word – staging, one risks being sniffily dismissed or told that one should ‘get out more.’ As one seldom otherwise than ‘out,’ and with decades of experience in writing about opera, your editor feels no need to make any apology for loving this finely detailed, carefully visualized (designs by Vicki Mortimer) expertly choreographed (Andrew George) and poetically lit (Paule Constable) production.

The Ottoman world was exquisitely detailed, not only in conventional ways such as the richly textured costumes and jewel-coloured furnishings, but also in the tantalizing ‘behind-the-scenes’ glimpses of the inhabitants of the Seraglio, the rabble of would-be artists and artisans hoping for the Pasha’s patronage, and the beautifully conceived sliding screens which contributed so much to the sense of distinction between what is inside and therefore either hidden or intensely private, or outside and laid bare for all to see.

The production is full of those small moments which reveal true understanding of how to present interactions between characters, and how to manage singing actors in complex situations. If you’d like a change from evenings which feature Pastorals staged as fetish-fests and lockets replaced by knickers, then an attempt to snag one of the very few remaining tickets for the few hours of Mozartian bliss which this production provides, is highly recommended.