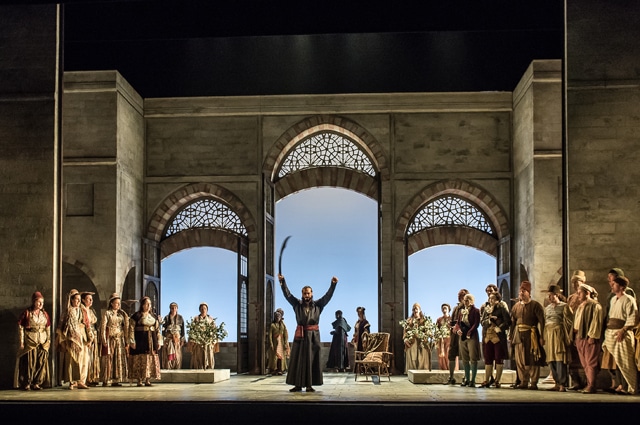 What happened to the glittering turquoise sea, so wonderfully evocative of the characters’ longing as well as the opera’s exotic setting? Presumably, it’s a casualty of the need for swifter scene changes at touring venues, but it is missed. It’s not the only change, but happily the production remains as visually exquisite as before, although some of the singing did not come quite close enough to the Festival cast’s standard to be entirely satisfying.

Christoph Altstaedt led a scintillating orchestral performance – this year’s Tour Orchestra has hit its stride very early on – with no loss of drive between the overture’s whizzing phrases and the finale. There were so many moments of instrumental perfection such as the playing of the strings and woodwind in the introduction to ‘Martern aller Arten’ that it’s tempting to conclude that the orchestra is the star of the show, but it has to share that with the actors and some of the singers.

As before, Franck Saurel’s Pasha Selim and Adrian Richards’ Mute are the staging’s anchors, showing that attention to detail in non-singing roles can really make a difference: it was difficult to avoid the thought that maybe Constanze had not made entirely the right choice, so persuasive was the Pasha’s passion and so convincing his warning about Belmonte’s father. 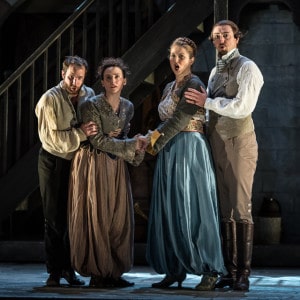 Belmonte himself was sung by the American tenor Ben Bliss, whose voice is bright in tone if a little unvaried in emphasis and whose stage presence is confident if a little brusque. Ana Maria Labin did not have an easy time with Constanze’s arias, those high-lying notes proving too much for her otherwise very musical artistry. Both leads rose to the occasion of their sublime duet.

James Kryshak and Rebecca Nelsen were a more consistently successful pair, the former managing to be endearing without becoming irritating, and the latter’s ‘Durch Zärtlichkeit’ winningly persuasive. The soprano will be familiar to those who saw Garsington’s version of ‘Entführung’ where she was a vibrant Constanze. Clive Bayley was luxury casting as Osmin, plumbing the depths with those sonorous low notes and lending his years of experience to the comedy.

Ian Rutherford’s faithful revival ensures that David McVicar’s production remains as colourful and finely detailed as before, the tantalizing glimpses of life in the harem contrasted with the touching scenes of domestic harmony as the children clamour for the Pasha’s attention, with much more success than the motley collection of would-be artists and other hopefuls seeking his patronage. Paule Constable’s lighting (here revived by David Manion) finely evokes the changing atmospheres of the days, and Vicki Mortimer’s designs perfectly evoke this exotic and tantalizing world.

You may miss out on the seascape, but this touring version is otherwise a very faithful version of the Festival’s production, complete with the first rate chorus – if you don’t know this opera, this is the ideal introduction to it, and if you’d like a taste of the music, try the ‘live’ performance available on YouTube of one of Mozart’s most beautiful arias, Belmonte’s ‘O wie ängstlich’ ravishingly sung by Fritz Wünderlich.