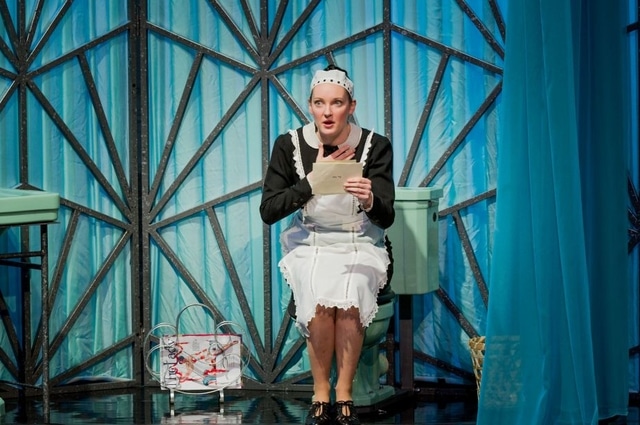 Stagings of Die Fledermaus can fall into one of two traps, and the first is simply to fail to be funny. The second, and actually more common, is to play up the laughs so much that the presentation becomes facile, showing no regard for the operetta’s darker and more sinister undertones. Both of these pitfalls are avoided in Opera Holland Park’s new production from Martin Lloyd-Evans, which proves to be both clever and enjoyable.

The director has had a number of notable successes for Holland Park (including I gioielli della Madonna, Adriana Lecouvreur, Il trittico and L’amore dei tre Re) and Mid Wales Opera, and he recently directed a powerful The Rape of Lucretia as resident producer at the Guildhall School of Music and Drama. His productions always demonstrate a strong balance between innovation and control, and this proves to be a particularly winning combination for Johann Strauss II’s creation.

Lloyd-Evans sets the action broadly in the 1920s, which enables Takis’ sets to display strong Art Deco credentials in keeping with the Viennese style of the day. Act I in Gabriel and Rosalinde von Eisenstein’s bedroom reveals Art Deco ‘panels’, and a stylish green bathroom that can be separated from the main area with a curtain. This ‘partition’ is used to good effect in ‘So muss allein ich bleiben’ where the married couple execute the sharp gestures that bring out the standard humour in the trio, while Adele provides contrast by looking far more relaxed as she sits in the bathroom smoking a fag! A steel framework also stands to one side. In Act III this forms the prison cells, but before this its skeleton nature acts as a visual counterbalance to the more imposing bedroom. In Act II at the ball, the Art Deco panels and this structure are carefully positioned to form an ensemble with the arches of the ruined Holland House, which stand as a permanent backdrop to the stage.

There are plenty of amusing moments from the start, as Alfredo keeps appearing at the window with a ladder, only to repeatedly fall to the ground as Adele shuts it on him. The humour arises from the fact that we hear the resulting clatter several seconds after the event, even though in reality the performer is standing at floor level to begin with. There are many entertaining moments, such as when Ben Johnson’s von Eisenstein and Gavan Ring’s Dr Falke dance in ‘Kommt mit mir zum Souper’, and when John Lofthouse’s Frank and Peter Davoren’s Alfredo make movements that reveal they have forgotten they are handcuffed together, but there is much subtlety too. The four policemen who appear with Frank to take von Eisenstein to prison stand rigidly for the majority of the scene before suddenly indulging in their comic bobbing and dancing.

While every other opera in Holland Park’s 2016 season is performed in its original language, Die Fledermaus is sung in English (with surtitles still) and it works because comedy ultimately relies on delivery and timing. Alistair Beaton’s 1994 translation is extremely skilful and, with its mentions of ‘spotted dick’ and ‘truncheons’, the sexual references are clear enough without coming across as too crude. The same might be said of the production as a whole as Rosalinde hides Alfredo under her sheets with a bottle of champagne so that it sticks up from under the covers in a suggestive manner.

Act II sees an array of colourful costumes emerge as each chorus member is handed their own character and role. With choreography by Adam Scown, ‘Im Feuerstrom der Reben’ sees crazy dancing alternate with the chorus kneeling in reverence as if they are genuinely worshipping champagne. Beyond the exuberance, however, there are more alluring moments such as a fan dance (courtesy of burlesque dancer Didi Derriere) and routines in which the entire cast (euphemistically) ‘get it on’. These actions speak about freedom, desire, promiscuity, lifestyle, responsibility (or lack thereof) and hence reveal the dark and sensuous sides to the story in equal measure. Even when the chorus ‘strip’ the corsets of the day ensure everyone remains well covered, and this symbolises the production’s ability to push boundaries in some ways and yet remain in very good taste. The switches in mood are also managed well as the alluring ‘clothes shedding’ is immediately followed by some comedy as someone brushes aside the entire pile of discarded garments with the single stroke of a huge brush.

The excellent cast prove equally strong at singing and acting, and none more so than Jennifer France as Adele. In ‘Mein Herr Marquis’ she displays an exquisite sound as she literally runs rings around von Eisenstein, kneeing him, stamping on his feet and finally sending him flying into a pile of cushions. As Rosalinde, Susanna Hurrell, with her own excellent soprano, equally takes the stage by storm in ‘Klänge der Heimat’, and it is noticeable how Adele responds negatively to her performance because she wants to be centre-stage for the night. Ben Johnson provides a superb all round performance as von Eisenstein, and it is good to see the part played by a tenor as Strauss originally intended. Gavan Ring brings the right blend of charm and malevolence to the role of Dr Falke, while Samantha Price as Prince Orlofsky similarly reveals how those in positions of power can callously manipulate others for their own amusement.

John Rigby conducts superbly while Peter Davoren as Alfred, Roburt Burt as Dr Blind, John Lofthouse as Frank and Joanne Marie Skillett as Ida all play their parts to the full. Ian Jervis as Frosch delivers a superb monologue at the start of Act III, which is naturally updated so that all of the prisoners are contemporary figures. We hear about Boris Johnson (who we learn is not ‘Good enough’), Nigel Farage, David Cameron (who is charged with running from the scene of a crime) and Jeremy Corbyn (who is actually free to leave but won’t)!

The ending to Die Fledermaus generally rewards the deserving and punishes the undeserving, but it is a testament to the strength of this production that we are left with a more bitter taste in the mouth than usual. In emphasising the story’s hierarchies, we are left to reel at how much cruelty has been displayed by those seeking private amusement, and it means that this Die Fledermaus makes us think as much as it causes us to laugh.