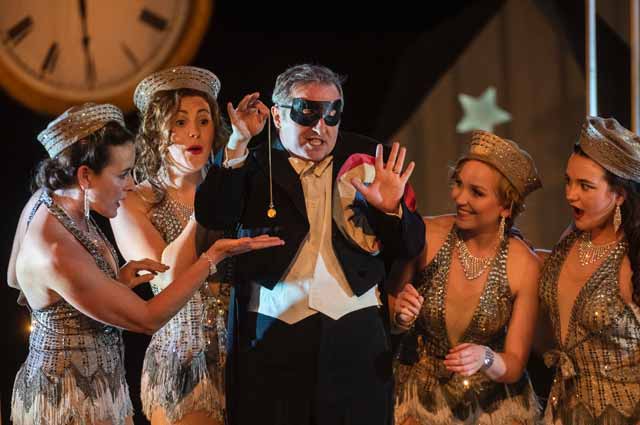 With the fun it can generate, Die Fledermaus would seem to be the perfect choice for a long, balmy summer’s night at West Green House Opera, surrounded by its beautiful gardens. It is not, however, enough to throw on a production and expect it to work of its own accord, for the work must still be carefully crafted to suit its environment and purpose. On the one hand, it would be all too easy for such a venue to create nothing more than a light, frothy piece of entertainment that paid no attention to the work’s Freudian undertones. While that would be a mistake, however, it is also true that an intimate production in this glorious setting may not want to feel quite as dark as some that are presented elsewhere.

Director and designer Richard Studer does a fine job of balancing these competing demands, with even the set conveying a sense of both ostentation and restraint. Studer utilises the colours black and gold, which were also seen to good effect in his Un ballo in maschera in 2017, to create a monochrome Art Deco backdrop, in front of which stand three golden cages. These contain different props in the various scenes and serve a number of purposes so that at the start of the first refrain of ‘O Gott, wie rührt mich dies!’ (although those words are not heard in Leonard Hancock and David Poutney’s smooth and witty translation) Eisenstein, Rosalinde and Adele each sing from one of them. A gilded cage normally implies that someone who has everything is still ultimately a prisoner, but in Act III this idea is turned on its head as it suggests that those in prison are really having it easy since decadence crowns their place of incarceration.

The production is dynamic and entertaining from the start, but for a long way it does not take us anywhere we would not expect to go as it falls just on the side of feeling too light. All this changes, however, in ‘Im Feuerstrom der Reben’ and from then on the audience really feels caught up in the heady atmosphere of the ball. The singing and dancing feel real and spontaneous, as opposed to things that have been deliberately designed to serve particular functions in an opera. The chorus is only eight strong, but they make a great sound as the four women are dressed as Busby Berkeley dancers and the men as a sailor, cowboy, Bavarian (in state costume) and member of the foreign legion. They also dance to a very high standard, with the evening’s choreographer Corinne Cowling being one of their number.

It is a shame that not more opportunity is taken to write in topical jokes at the start of Act III as many productions do, with practically the only one appearing being Frosch’s insistence that he is ‘strong and stable’ when he is accused of being drunk. However, Act III as a whole works a treat, as Eisenstein strips down to reveal a Robin costume. This is funny enough, but when Falke rushes in dressed as Batman in such a way that even those familiar with the plot will feel taken by surprise, it really seems as if we as the audience can enjoy being part of the joke too.

There are several highly notable performances, with Galina Averina displaying some excellent coloratura as she really goes to town in embracing the role of Adele. Jana Holesworth reveals a highly accomplished soprano, with her spirited portrayal of Rosalinde being made all the more remarkable by the fact that she only replaced an ailing Stephanie Corley at the eleventh hour. Benjamin Bevan asserts a strong baritone as Falke, and from the moment he enters his acting captures the sense of the entire affair being a riotous lark. Peter Van Hulle is an excellent Eisenstein and Rebecca Afonwy-Jones a sumptuously voiced Prince Orlofsky, while Robin Bailey is a highly effective Alfred as his tenor is warm and his accent and mannerisms strongly capture the spirit of the piece. The orchestra is naturally smaller than most that would tackle this score, as it utilises Tony Burke’s reduced orchestration, but under the sure baton of Jonathan Lyness it frequently produces an extremely pleasing sound.

West Green House Opera’s 2019 season continues until 28 July 2019. For details of all events and tickets visit the designated website.