by Melanie Eskenazi
published: 22 May 2016 in Opera and Classical Reviews
Tweet 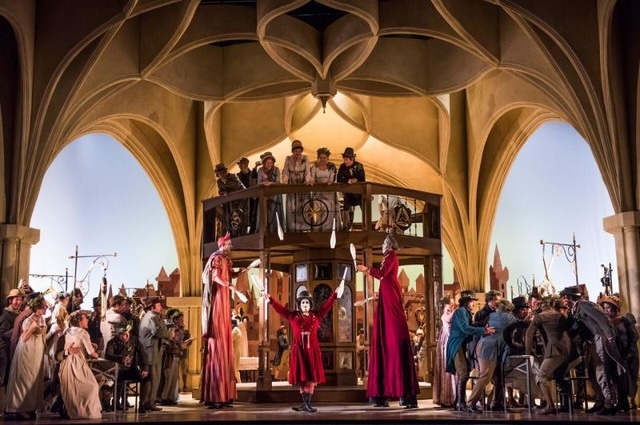 This genuinely festive, lovingly detailed production featuring the best Hans Sachs since Norman Bailey was the perfect evidence that the judges of the International Opera Awards, which gave Glyndebourne the ‘Festival of the Year’ accolade, had got it right. It’s a massive undertaking for a relatively small house, but David McVicar’s production is a classic example of what the collaborative style of Glyndebourne can achieve: Nürnberg can seldom have looked so alluring as it does in Vicki Mortimer’s finely etched designs and the warm, lambent glow provided by Paule Constable’s uniquely sensitive lighting, and the Chorus was as much a star as the soloists.

Remarkably, three of the principals – the Sachs, Pogner and Magdalene – had begun their careers in the Glyndebourne Chorus, and from what we heard last night, it will not be surprising if the present group, under Jeremy Bines’ direction, yields an equally impressive set of soloists. ‘Wach auf’ has never sounded so tremendous, nor the townsfolk so indignant and celebratory by turns.

Gerald Finley is the Sachs nowadays, singing with burnished tone and ample phrasing, and acting with ferocious commitment – this Sachs is no tedious moralizer but a man all too aware of his own frailty, and he made Eva’s following of her heart positively searing. Both the monologues were beautifully done, and his collaboration in the song’s composition was very moving, as was his singing in the great quintet. When Sachs apostrophizes his loved city, its imagined towers flooded with golden light, you can’t help but feel that this is what opera is all about.

Finley was supported by a mostly fine cast, with a number of house debutants; David Portillo’s confident, engaging and incisively sung David, Patrick Guetti’s gripping Nightwatchman and Jochen Kupfer’s Beckmesser were all notable newcomers to this stage. Kupfer is an established Lieder singer, and it showed in his finely honed phrasing; it was impossible to disguise the beauty of his tone even in Beckmesser’s mangling of his song. His characterization, as a sort of Malvolio crossed with Mr Bean, provided much amusement. 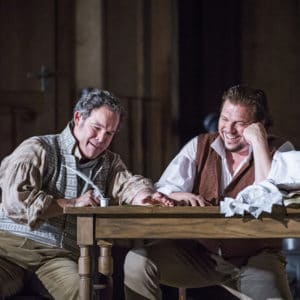 The other Glyndebourne debutant amongst the principals, Michael Schade’s Walther, is more of a known quantity, but on this occasion admirers of his recordings would have been a little disappointed; he is a sincere and committed artist but last night he seemed very nervous in the ‘Prize Song’ and his tone did not always fill out the lines. Walther is a fiendish role so it’s very likely that later performances will find him more settled in it.

Amanda Majeski’s Eva fulfilled most of the promise which she had shown as the Countess in the 2013 Le nozze di Figaro, her touching intonation and unaffected stage presence ideal for Wagner’s ‘little Ev’chen’ although she found some of her high notes a bit of a strain. Hanna Hipp’s affectionately acted, warmly sung Magdalene was an ideal companion for her. The role of Eva’s father is a rightly coveted one, and Alastair Miles is Pogner in the same way as Finley is Sachs, his magisterial tone and patrician manner perfectly suited to it.

The Masters were cast from strength and lovingly characterized, with Colin Judson’s fussy Vogelgesang, Adrian Thompson’s delightfully dotty Esslinger and Darren Jeffery’s ideally pompous Kothner outstanding – their singing was definitely master quality, and you could probably extract a couple of Walthers and a trio of Beckmessers from the line-up of guildsmen on offer.

It’s quite a challenge to take over the conducting of a Wagner opera from a house’s Musical Director, but Michael Güttler, the Principal Conductor of Finnish National Opera, stepped into Robin Ticciati’s shoes with seemingly effortless aplomb. He’s no stranger to the work, and it showed in his seamless transitions, confident management of timing and ability to coax playing with a genuine sense of intimacy from the London Philharmonic Orchestra. The overture seemed to presage quite a languid pace but this was quickly dissipated in a lively, highly dramatic rendition which still kept its intimacy when required.

The production has very few seats left for the remaining performances, although it’s often possible to snag a slip seat at short notice. A more reliable option is the ‘live’ screening of the 2011 staging which is to be broadcast in cinemas and online, from Tuesday July 12th onwards: having seen that recording, we can thoroughly recommend it.