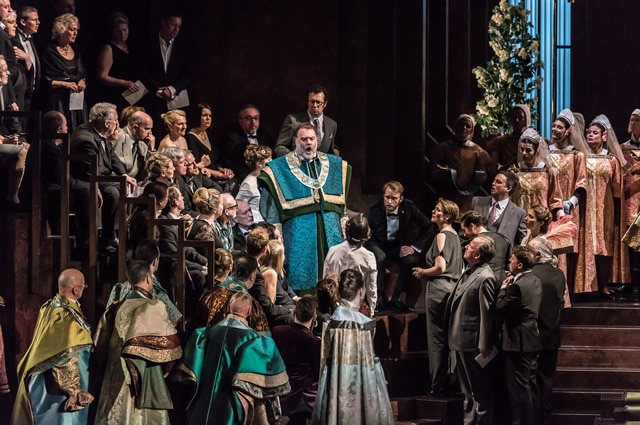 According to some, this production begins in a Gentlemen’s Club, features Beckmesser playing a “clavichord” or a “harpsichord” and ends with Eva rejecting all that guff about “Holy German Art.” Actually, the first scene set resembles a cross between the Barbican and a 5-star hotel foyer, with a strong whiff of Art Deco in what might be called its ‘Organ Room’ moment, Beckmesser in fact plays a Spinet and as for Eva, her final strop seems to be in horror at her greasy beau’s sudden transformation from rebel slob into pillar of Guild respectability. Does it all make for a satisfying take on Wagner’s most-loved work? Not really, but at least it has some interesting ideas beyond embossed wallpaper and cardboard cut-outs.

There’s no point at all in going to the ROH to see a Kasper Holten production if your point of reference for this work is, say, Glyndebourne’s warm, poetic, life-enhancing take, or even, for those of advanced years, Scottish Opera’s classic slice of Nuremberg life centred around Norman Bailey’s still-unequalled Sachs. Kasper takes Wagner’s “Kinder, schafft Neues” to an extreme, and of course it won’t please everyone. The main problem is that in fact there’s very little that’s new about it – we are all familiar with the ‘Let’s do it backstage’ / ‘Let’s debunk all that noble Knight stuff’ / ‘Let’s mix up the costumes a bit, who cares about period?’ attitude, and if you’re going to be offended by that, then stay at home and perhaps pop on the stream of the Met’s wonderful staging, resolutely traditional and with Ben Heppner’s heroic Walther and Karita Mattila’s transcendent Eva. You can see and hear the Quintet from it, on the ROH’s own site.

There were no voices to compare with those two on the ROH stage, the best singing coming not from the principals but from Allan Clayton’s engaging, forcefully projected David, performed with exemplary diction and ringing, heroic tone, and from Sebastian Holecek’s endearingly pompous, gloriously sung Kothner. David and Kothner really should not be the best on stage, but so it was, and they were followed by the Beckmesser of Johannes Martin Kränzle, even though he was compelled to present an even more ridiculous figure than usual – no matter, since his exact diction and aristocratic phrasing dominated his scenes. Hanna Hipp’s lovely burnished mezzo is ideal for Magdalene, but quite why she is turned into a ‘floor manager’ complete with headset & the ubiquitous clipboard, is anybody’s guess.

Bryn Terfel always gives his characterizations the fullest commitment, although here he seemed ill at ease – possibly Sachs was wondering which idiot had chopped down his lilac tree, or maybe why the hell he had to carry his cobbler’s equipe around town with him. On this occasion his singing was on the muted side until the final scene, when he gave it his all. At least he was spared the indignity of being re-imagined as the opposite of himself, that being reserved for Gwyn Hughes Jones’ Walther, not a noble Knight stooping to integrate with the middle classes, and certainly not a man for whom Eva could gasp when she sees him ‘clad in knightly splendour’ – no splendour at all, instead an unpleasant, bratty greaser whose one moment of glory was his ‘Yesss!’ reaction to Sachs’ homily on sacred German art. His singing was heartfelt but there were too many aspirates, possibly due to being under the weather or maybe just underwhelmed by his characterization. 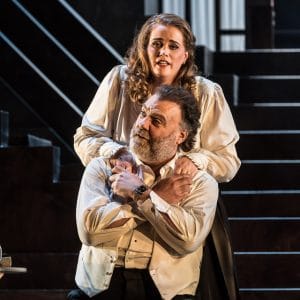 Stephen Milling began impressively as Pogner but after his first scene the bloom on his voice seemed to fade; his relationship with his daughter, as shown in his reaction to her rather prissy statement about a child’s duty, was one of the production’s better ideas. Rachel Willis-Sørensen’s Eva, frumpily costumed and not given much to do with the exception of that last-act tantrum, was sung with poise, not very warmly but accurately, and she launched the quintet with just the right tone. David Shipley, again weirdly costumed, sang the night watchman’s consoling music quite beautifully.

The chorus was superbly directed by William Spaulding, who was shown conducting them in Act I, where he seemed to be in charge of the Pontypridd Male Voice Choir. As for the ‘Volk,’ seen as evening-dressed poshos for the JohannesFest, whichever of Mr Spaulding or Kasper Holten had directed their acting deserves much praise – it’s not often you see such totally convincing stage chat. Why were they not costumed as townsfolk? Who knows – perhaps they represented the corporate sponsors of the Singing Competition?

The lack of a one-period style has long ceased to be troubling, and there is something to be said for having the populace resemble the audience, but the close of Act II had little to redeem it, being at once virtually humourless and extremely extravagant – a fatal combination. What does Walpurgisnacht have to do with Midsummer’s Night? Is the whole thing a deconstruction of Brexit (June 23rd being Referendum day) in which chaos is anticipated, nightmare replaces dream and the cosy bourgeois / ‘elitist’ dominance is broken?

Other aspects of the production were more positive and will, one suspects, endure rather better; personal relationships were lovingly delineated where it mattered, that first act was in fact successful in its admittedly unusual setting, the Art Deco pipes and patterns suggesting a ‘churchy’ background and the atmosphere of male ‘clubbyness’ well evoked, and the final scene was a riot of colour, with as good a troupe of what we would probably call ‘artisans’ as you could wish for. It would help to re-think that Act II conclusion, to characterize the Masters with a bit more individuality and to get rid of the water-coolers and fire hoses. A re-working might also help the singers in terms of confidence, although the orchestra, under Tony Pappano, needs no re-thinking: after a slightly rocky start to the Prelude, the playing was well nigh perfect, especially in the sublime introduction to the Quintet and the ‘halo’ surrounding the Prize Song. So, not a ‘Meistersinger’ for those who prefer warm representational to (sometimes) wilful re-working.