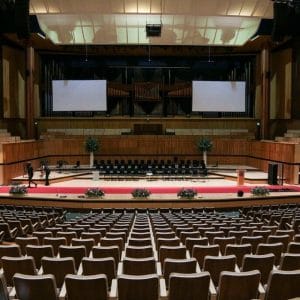 During his lifetime, Richard Wagner scored only two real successes with his operas. One was the early Rienzi, a work now considered to be well below the standard of his later compositions, and the other his more familiar comedy, Die Meistersinger von Nürnberg. Hitler’s use of Die Meistersinger as a propaganda tool during the 1920s and 1930s, emphasising the undeniable German Nationalism of the piece, has marred the opera’s reception in recent times, so appalling is its xenophobic message, yet there is more to the opera than meets the eye.

It is important to remember that Meistersinger‘s success at its Munich premiere was partly because of its apparent establishment of a German opera as an alternative to the dominance of French Grand opera in the nineteenth century. In comparison with Faust, which is the prime example of the latter variety, Die Meistersinger is a well-constructed, warm-hearted, human piece, stacked full of characters with whom one can identify and sympathise, and despite the somewhat jarring cries of “Honour your German masters” in the opera’s closing bars, I know which kind of opera I prefer.

Nowadays, concert performances of operas can often be more satisfying than staged productions, not least because the singers can concentrate on the music without the distractions of irrelevant props and sets, and this concert performance given by the Zurich Opera on tour at the Royal Festival Hall was no exception. It should be said that this was by no means a static performance – the soloists and chorus moved on and off the stage as the drama demanded, which was a sensible option in this 5½ hour-long work.

As Hans Sachs, the wise town cobbler who controls much of the action, José van Dam gave an acceptable performance in the first two acts, and was exceptional in the third. He appeared to have a cold or be suffering from the air conditioning, for he kept sneezing and drinking lots of water. Yet his authoritative performance of the “Wahn” monologue in the final act was worth waiting for, and he eventually engaged with the other singers.

The worst one could say about Michael Volle as Sixtus Beckmesser, the town clerk who attempts to stop Eva and Walther, the opera’s romantic lovers, from coming together, is that his is a far too attractive performance. His glorious baritone filled the hall from start to finish, he engaged with the drama and scarcely glanced at his score. Covent Garden should immediately grab him for the next revival of this opera.

Walther and Eva, who eventually do come together, were played by the real-life couple Peter Seiffert and Petra-Maria Schnitzer. The former was particularly stupendous, providing the highlight of the evening with his performance of the draft Prize Song in the “composition” scene at the beginning of Act Three. Schnitzer has a beautiful voice, but was often unable to scale the heights in difficult passages such as the gorgeous Quintet.

Special mentions are due to Christoph Strehl as David, Sachs’ apprentice, and Matti Salminen as Pogner, Eva’s father. Strehl managed to make something interesting of the difficult opening scene, and Salminen was commanding in all his music. Also outstanding was Günther Groissböck as the Nightwatchman, who only spends about six minutes on the stage in this mammoth work but managed to give those minutes a remarkable authority and timbre.

Other roles were competently, if unremarkably, filled. The chorus was in splendid form, more so in the Festweise scene than in the town brawl of Act 2, which I felt fell apart. Holding it together was Franz Welser-Möst, a Zurich regular who managed to recover after a surprisingly shaky Prelude to lead the orchestra and singers in an enjoyable performance.