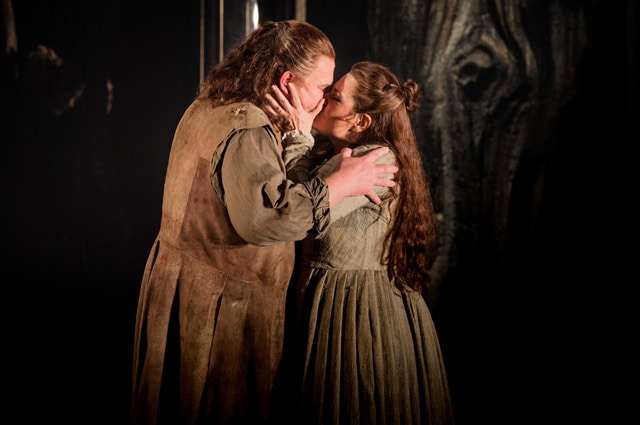 What is the Pitt Rivers Museum doing in Valhalla? Why does Sieglinde remove her Mead goblet from a display, and why is Notung perched up in a glass case? The answer must be that we are to see these Gods and semi-mortals as denizens of antiquity, selecting their artefacts from carefully exhibited groups – perhaps Siegmund had wandered in from the Neanderthal section? The odd thing is, that although it all looked a bit daft to start with, and was confusing to say the least, it quickly became easy to settle into Stephen Medcalf’s production and Jamie Vartan’s designs. Accepting the style was made all the simpler by some fine singing and exceptional playing.

If you last saw Siegmund and Sieglinde in the persons of Jonas Kaufmann and Karita Mattila, you’ll find quite a contrast with Bryan Register and Claire Rutter. The latter pair actually look rather like one another, but their singing is not as subtle or engrossing as their more famous counterparts – nevertheless, both give it their all. Bryan Register is clearly a name to watch – this is a really big, generous voice, easily reaching the heights yet capable of tenderness, and Claire Rutter is, as always with this much-loved soprano, the model of commitment. Alan Ewing’s Hunding was not quite at his best on this occasion, his singing more subdued than one might expect from him. 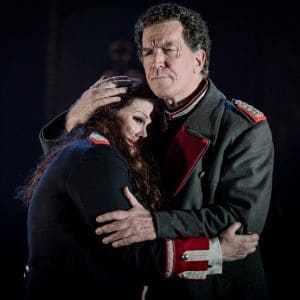 Thomas Hall’s Wotan, suave in a velvet smoking jacket, wilted a little towards the end of his great Farewell, but he sang with incisive phrasing and noble tone. You could not help but feel a bit sorry for him when Sara Fulgoni’s superbly characterized Fricka was doing her nagging. Jane Dutton’s Brünnhilde was a less vivid assumption, hampered perhaps by being presented more as a Norman Thelfell pony rider than a woman capable of getting to grips with the likes of Grane, but her singing impressed with its warm tone and often elegant phrasing. The Valkyries were a terrifying lot, especially Becca Marriott’s Ortlinde and Gemma Morsley’s Grimgerde – their glee as they hauled the bloodied body bags (those were some slender heroes) and their terror at the implications of their sister’s deed, were enough to send any would-be warrior off the field lest he should catch their gaze.

The Bournemouth Symphony Orchestra played wonderfully for Stephen Barlow, whipping up far more excitement from the pit than one might expect, and supporting the singers with sympathetic skill. Special mention must be made of the exceptional ‘cello and and horn sections, led respectively by Jesper Svedberg and Nicolas Fleury.

To raise an opera house from earth to performance-ready in less than a year is an undertaking akin to building Valhalla itself, and to put on three such ambitious operas in the first season is a tremendous achievement by all concerned, especially of course Wasfi Kani, whose involvement extends from persuading donors to part with ever more cash, to serving cake in the interval. This Walküre is a fitting closing production to the first season in the Theatre in the Woods.