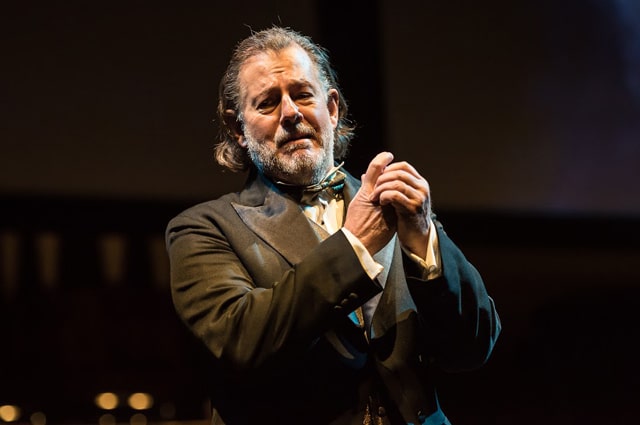 Opera North’s presentation of Wagner’s Der Ring des Nibelungen is proving that it is not necessary for a Ring Cycle to be fully staged in order to have maximum dramatic or emotional impact. Director Peter Mumford’s unique approach to Das Rheingold did much to reveal the hierarchies inherent in the story, and in Die Walküre characters were explored to a degree that would not perhaps have been possible in a more conventional staging.

As with Rheingold, the soloists acted out their parts to the full, only by facing the audience. This enabled them to cope with a performance space that was merely a strip in front of the orchestra, and allowed them to present facets to their characters that they could not have shown by interacting with other figures. For example, had Hunding confronted Siegmund face to face he would have had to reveal his strength and determination in order to intimidate the stranger. By having him face outwards, however, he could show his fear and confusion that this person should look so like Sieglinde. Wotan could express more pain in his eyes than he would have dared reveal to Brünnhilde when she initially argued that she followed his wishes rather than his instructions. Similarly, when she suggested putting a ring of fire around her sleeping body he showed how he immediately warmed to the idea. Had he been forced to look her in the eye he could not have revealed that he was ‘giving in’ so easily.

On other occasions, the approach simply aided the drama. During Wotan and Fricka’s scene the pair spent much of the time with one standing behind the other’s shoulder. This revealed Wotan’s reluctance to look his wife in the eye, but also worked visually by having both face outwards. Siegmund’s death was rendered very effectively with all of the characters standing in a line, most at a distance from each other. In this way, although there were no props, we saw through the characters’ actions as they all faced the front: Siegmund brandish Nothung; Wotan raise his spear; Siegmund’s sword fall broken to the ground; Hunding lunge ‘at’ Siegmund (ripping the heart out seems to be the method for killing people in this Cycle); Siegmund die, and Sieglinde crumble to the ground.

As with Das Rheingold, three screens revealed images of nature and the elements throughout, and it was interesting to see how many of these specifically followed Siegmund’s journey. For example, the ‘Prelude’ was accompanied by images of a forest that implied someone was fleeing through it. Then in Act I we saw in turn the glowing remains of the oak tree that was burnt when Siegmund’s mother was killed, Nothung stuck in the ash tree and finally flames of passion.

There were also times when the absence of physical staging provided greater scope to play out the scenarios. In Act II it is normally difficult to portray Siegmund and Sieglinde fleeing across a mountain ridge through the night. Here, however, it only needed a short description and images on the screen, and distraught expressions on the lovers’ faces, to suggest the ground they were covering.

In the same way, in the Ritt der Walküren it is so hard to present horses flying through the air that many productions do not try anyway. Here, however, by not having to portray the gathering of dead heroes, the piece could focus more on the relationships between the Walküre. Each displayed a feverish excitement as they greeted their sisters, but there was also the type of bickering we would expect to see between such strong-headed siblings. For example, when Waltraute reprimanded Siegrune for being late the latter snapped back ‘Arbeit gab’s!’ (I had work to do).

Lee Bisset was an excellent Sieglinde, with a soprano that demonstrated a beautiful tone, even when her voice was at its most full and anguished. She also proved an extremely expressive actor, revealing her excitement by degree at Siegmund’s presence and then looking genuinely frightened as she tried to flee from her nightmare in Act II. As Siegmund, Michael Weinius revealed a strong and expansive tenor instrument although, in the face of Bisset’s acting, he came across as a little lacklustre. Nevertheless, his Act II encounter with Brünnhilde was convincingly rendered as he moved from showing mild confusion when she initially told him he was to die to revealing a total contempt for everything for which she seemed to stand. James Creswell was superb as Hunding, asserting his strong yet colourful bass as much as he had as Fasolt in Das Rheingold. Yvonne Howard similarly repeated the magic she had brought to the role of Fricka the night before.

Kelly Cae Hogan and Robert Hayward were superb as Brünnhilde and Wotan respectively, revealing an almost electric chemistry as they virtually danced on at the start of Act II. Hogan’s rich and sumptuous tone combined with a compelling presence to make us look forward immensely to her performances in Siegfried and Götterdämmerung. Occasionally Hayward’s voice did not feel as focused and penetrating as it might have been, but this never detracted from the basic strength and warmth to be found in it, and he proved a beautifully subtle actor. His final glances at Brünnhilde revealed a glowing pride in his daughter, alongside a sadness that already the world was no longer really his. Only moments earlier, however, when he summoned the fire his face showed how he suddenly remembered he was still a powerful god who had the ability to control Loge.

As in Das Rheingold, Richard Farnes’ conducting was good, and the Orchestra of Opera North revealed a certain sensitivity and lightness in relative terms, while seemingly plumbing the depths of various instrumental lines. Balance was not always at a premium, and the Ritt der Walküren, sung well by the eight women, saw the wind feel underpowered. The section felt a lot stronger, however, during its many other opportunities to come to the fore, and there were no problems at all in the Fire Music. The halfway point in any Ring Cycle is the first time when it feels safe to make predictions regarding the remainder, and based on what has already been witnessed it seems fair to speculate that Siegfried and Götterdämmerung will prove to be equally engrossing.

Opera North’s Ring Cycle continues at the Royal Festival Hall until 3 July with Siegfried on 1 July and Götterdämmerung on 3 July. The operas are also being screened live in the Southbank Centre’s Clore Ballroom for free (no tickets required). For further details on this and the other related events taking place visit the Southbank Centre website.

After this week Opera North’s Ring Cycle travels to the Sage Gateshead where it will be performed between 5 and 10 July.