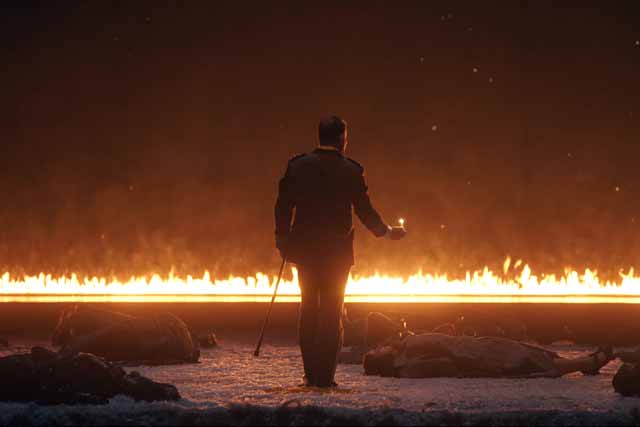 The Teatro Real is assembling its Ring Cycle one opera per season, concluding in 2022, conveniently coinciding with the company’s silver jubilee. As yet there’s no announcement as to whether we can expect a complete cycle or a standalone Götterdämmerung, but either way there’ll be much cause for celebration if this outstandingly well played and sung Walküre is anything to go by.

The challenges and resources involved in mounting a Ring Cycle are huge, and in an ideal world the company’s ever-resourceful artistic director, Joan Matabosch, would have commissioned a brand new one rather than importing Robert Carsen’s much-travelled Cologne staging. But fifteen years on the Canadian director’s interpretation still has much going for it, although this Walküre wasn’t without niggles. Patrick Kinmonth’s designs and costumes are roughly contemporary – a hangar for Act I, a huge drawing room for Act II, which later morphs into a battlefield complete with a bombed-out jeep, and the same battlefield strewn with corpses for Act III.

We’re evidently in some war-torn country – The Völsung twins wear army fatigues, Wotan is kitted out as an army general – with fascistic undertones which lend an air of menace to proceedings, underpinned by the continuous snow fall and Manfred Voss’ gloomy lighting plot. As with all his stagings, Carsen’s personenregie is mostly meticulously thought-through, but there’s one glaring omission, and that’s the titular character herself – Brünnhilde. Costumed in a burgundy dress and sensible shoes (her sisters are dressed identically), Carsen paints the character with the broadest of brushstrokes, but who is she? What is her role in the drama? What motivates her to rescue Siegmund, and later Sieglinde? Why is she Wotan’s favourite daughter? All these questions are left unanswered, so she emerges as a one-dimensional character. It’s the director’s only miscalculation, but a serious one.

Ricarda Merbeth tried to inject the role with some pathos and nobility, but despite her valiant efforts failed to move. She possesses a bright, open soprano which combined with a rich lower register, essential given this is where the majority of the role lies, makes her ideal for the role. Although her timbre may not be that individual, she never made an ugly sound all evening. Fearless and committed, she certainly gave the role her all. 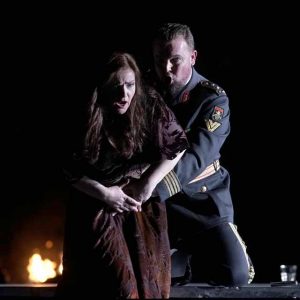 As her father, Tomasz Konieczny was a virile, commanding presence. Open and bright at the top, and suitably resonant in the lower-lying passages of Wotan’s narration in Act II, he sang tirelessly all night, capping his performance with a tender, lyrical Abschied. Occasionally one hankered after a little more colour in the voice, and he came unstuck when summoning the God of fire, Loge – first night nerves for sure.

Stuart Skelton and Adrianne Piezconka were as ardent a pair of Völsung twins as you’ll encounter. The Australian tenor has very much made the role of Siegmund his own, but his performance on opening night was nothing short of a revelation – in fact his singing out-surpassed his Siegmund at Covent Garden, which is saying something. Gloriously phrased, and fervently voiced, he provided a lesson in how to sing Wagner faithfully – his cries of ‘Wälse’ were overpowering, his ‘Winterstürme’ lyrically tender. These days you’d be unlikely to hear this role sung better. As his sister, Piezconka seemed galvanised by his presence, the interplay between the two seemed almost palpable, singing throughout the evening with ecstasy and abandon, rounding her performance off with a euphoric ‘O hehrstes Wunder’ as she learns she’s carrying Siegmund’s baby, Siegfried.

Gunther Groissböck was due to sing Hunding, but when Rene Pape pulled out of the Berlin Staatsoper’s new Rosenkavalier, Groissböck took his place as Ochs, and we got Pape in his place. And what a replacement! Implacably sung, his inky-black voice was perfect for the role as was his magnetic stage presence. Daniela Sindram was a formidable Fricka, while the Valkyries were superb.

But what made this Walküre so memorable was Pablo Heras-Casado’s conducting and the orchestral playing. He was the undoubted hero of the hour, leading an impassioned, fleet account of this miraculous score, never allowing tension to sag. Orchestral textures were finally balanced, and he was rewarded with exceptional playing, particularly from the brass and woodwind sections, all underpinned by luminous strings. Tempi were judiciously chosen, and there was a natural ebb and flow to the performance – in fact this was one of the finest performances of this work we’ve heard live in the theatre, whetting the appetite for the remaining two operas.