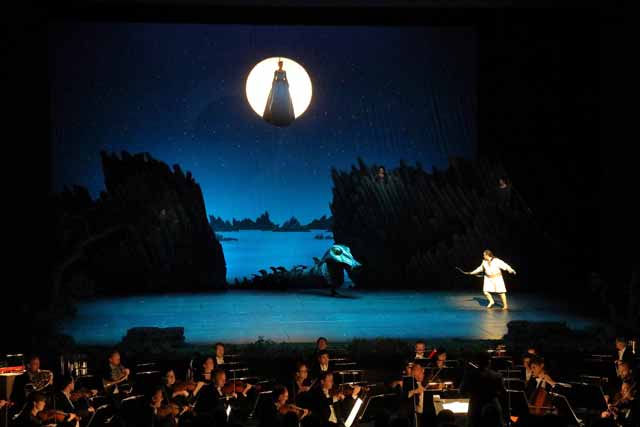 So, after a seven month drought of live music, theatre and opera, we were back in an opera house again, albeit we had to travel to Munich for it. But as our own theatres remain mothballed due to the ineptitude of the government and it’s ambivalent Culture Secretary, Oliver Dowden, the Bavarian State Opera has grabbed the bull by the horns, amended the opening part of its 2020/21 season and achieved what many thought and still think impossible – performing live opera to a paying audience. Of course, compromises have had to be made. One aspect of keeping spectators safe (currently limited to 500) is that contact between them is kept to the absolute minimum – hence no intervals. Masks can be removed once the performance starts, no one sits next to you, and there’s a completely empty row of seats in front and behind you. 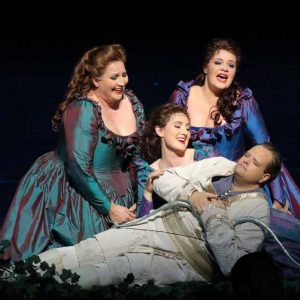 There’s no orchestra pit either, the orchestra is now level with the audience and socially distanced, resulting in the first five rows of seats being removed from the Stalls. This solution poses its own problems when it comes to balance and orchestral textures. And the conductor is a long way from the stage, which may have been the reason why Tamino’s entrance nearly derailed, and from our third row seat the overwhelming musical line we heard was the first violin part.

But these are passing comments rather than niggles, as this opening performance of August Everding’s vintage staging of Die Zauberflöte was as emotional as it was engaging. We don’t mind admitting that the start of the overture brought tears us to our eyes. Here we were at our first live opera for seven months – that gap has been painful, and hearing music again after all this time made us realize how much we’ve missed it.

A superlative cast had been assembled. Once past the opening, Benjamin Bruns’ Tamino settled down and gave an ardent, brightly-sung account of the role, ably partnered by Hanna-Elisabeth Müller as a radiant, full voiced Pamina. Michael Nagy was a sympathetic, engaging, and funny Papageno who used his rich baritone to telling effect throughout. French soprano Sabine Devieilhe, one of today’s most sought-after Queens of the Night, dispatched both her fiendishly difficult arias with apparent ease, her coloratura spot on, whilst Mika Kares was a gravely authoritative Sarastro.

Due to the fact there was no interval, and the inability to perform large-scale choral set pieces at this time, ‘O Isis und Osiris’ was cut. After the orchestral introduction to the second act the curtain rose on Sarastro telling Tamino and Pamina their fidelity was about to be tested. This excision kept the running time to about two and a half hours, which without an interval was just right.

Everding’s 40-year-old staging remains a relic from a bygone era. In Jürgen Rose’s traditional designs, replete with painted back cloths, he tells the story in its simplest terms. Anyone hankering after radical insights will have to look elsewhere, although there has been one important update – Monastatos thankfully no longer wears blackface, and is performed instead as a pantomime villain, by the ever-inventive Wolfgang Ablinger-Sperrhacke. With a superb trio of ladies, and boys from the Tölzer Knabenchor (the best we’ve ever heard), this was by anyone’s standards a dream cast.

Conductor Jordan de Souza certainly had his work cut out for him, trying to maintain orchestral balance whilst ensuring his singers never got drowned, yet he never faltered, with the orchestra delivering a glowing account of the score. This was a memorable evening on so many levels. Having seen this opera countless times we never imagined we’d be this excited at seeing it again, but after a seven month drought it was balm to the ears. And it proved it can be done – you can read how here.