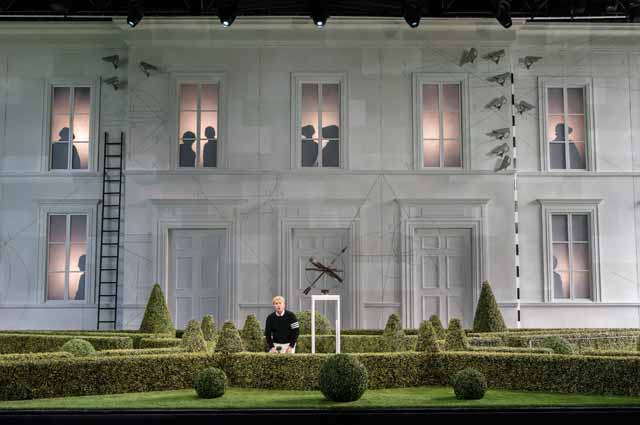 Mozart’s final opera, sung and played with the grandeur and sensitivity it requires, is always a sublime experience, able to survive whatever is thrown at it; thus one is still uplifted by the great hymn ‘Heil sei euch Geweihten’ even when the representatives of Reason and Enlightenment are got up to look like Monty Python’s Arthur Pewty, and one is still enchanted by Pamina and Papageno’s duet ‘Bei Männern’ even when this paean to the nobility of love is accompanied by one delousing the other as if they were a pair of gibbons.

Such separation from certain visual aspects is made possible by some very fine singing and playing; this is a cast and orchestra which any house would be proud to show off. Benjamin Hulett’s Tamino, with crisp phrasing, bright, forward tone and aspirate-free singing of ‘Dies bildnis’ was a joy – it’s a mystery why this generally clap-happy audience gave him no ovation for such clean, beautifully phrased singing of that fiendish aria. Of his stage business with the hose and tin bath, the less said the better, and good for him that he got it out of the way with dignity.

As with Tamino, Louise Alder’s Pamina seemed to have been costumed from The White Company’s Spring range, which was no detriment to her singing which was as mellifluous and sensitive as we have come to expect from her. ‘Ach, ich fuhl’s’ created sympathy even though the characterization imposed upon her deprived it of its usual pathos, and her vocal performance throughout fulfilled the promise shown with her Ilia in this house two years ago.

Jonathan McGovern has one of the most beautiful baritone voices around today, and one assumes that he’s also capable of being a likeable stage figure, although his Papageno seemed to have been crafted to be as un-endearing as possible. Lovely burnished tone and exact diction were there in plenty, but his characterization was misconceived. His Papagena was the vivacious Lara Marie Müller, looking as if she’d wandered in from The Cunning Little Vixen and singing with grace and wit. No one can take away the charm from ‘Pa-Pa-Pa-Pa-Pa” especially when sung with such verve, but whoever thought it necessary for the duo to strip off whilst singing was doing their best to kill it: this music breathes passion in every bar and has no need for it to be signalled. 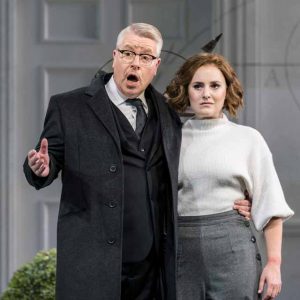 James Creswell has the imposing presence and vocal depth for Sarastro, and he maintained the right level of dignity throughout, as did Richard Burkhard’s exceptionally noble-sounding Speaker. Sen Guo’s Queen of the Night was costumed as Queen Victoria after Prince Albert’s death – quite why is hard to say, since this deprived her of her other-worldly quality and her capacity to instil terror. Her first aria did not quite astonish, but her second raised the roof, to suitable acclaim.

Katherine Crompton, Marta Fontanals-Simmons and Katie Stevenson were as fine a trio of Ladies as anyone could wish, singing as fabulously as they looked, although their wierd twitches – presumably meant to suggest some sort of repression – were distracting. Oliver German, Frederick Jemison and Aman de Silva were superb as the Three Boys, singing tunefully and expertly negotiating their stage business. Adrian Thompson is a great character tenor, and he sang Monostatos with his customary finesse despite having been given a rather muted characterization.

The Garsington Opera Chorus has always been outstanding, and they sang gloriously; there are some really great voices here, forming a perfect ensemble. Christian Curnyn brought his wealth of experience to his musical direction of the score, and the Garsington Opera Orchestra played with style. The overture and the great choral pieces were solemn and dignified, and the duets sparkling.

Netia Jones’ design seems to have taken inspiration from a fruitful kitty of sources, including Monty Python’s Flying Circus, 1984,Twin Peaks, Kingsman: The Secret Service, and The Handmaid’s Tale. The fake-Buxus parterre and country house facade are elegant, although the former presents awkward obstacles for the singers. All is beautifully lit by Mark Jonathan. The leading concept of the production seems to be that Pamina is not the strong guiding inspiration, accompanying Tamino as his equal through their trials, but a petulant teenage rebel who ‘bravely’ rejects male repression in the form of the Masons, and somehow brings down the concept of Reason and Enlightenment at one fell stroke. It fits neither the libretto nor the music, but it is largely an irrelevance given the exalted level of the vocal and orchestral performance.