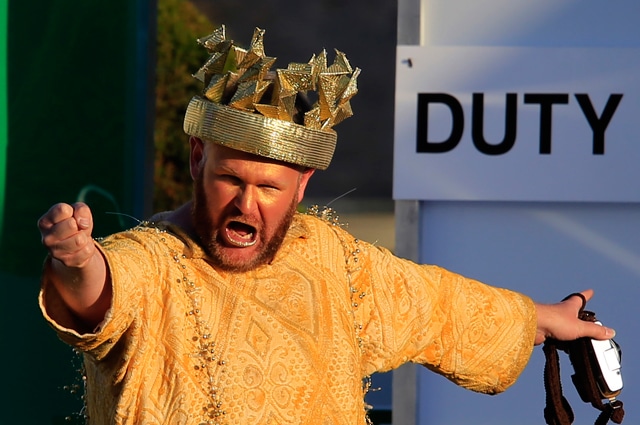 Now in its twenty-fourth year, Bampton Classical Opera specialises in bringing seldom, if ever, performed eighteenth century operas back to life. Last year it presented Salieri’s La grotta di Trofonio, a 1785 work that proved Mozart learnt as much from the older composer as vice versa, and since July 2016 it has been touring a double bill of rarities by Gluck and Arne under the title of Divine Comedies.

Director of productions, Jeremy Gray, very much believes that it is necessary to breathe new life into works such as these in order to justify their resurrection. In this instance, however, his decision on precisely how to update them was also dictated by one specific factor. While the final performance took place in St John’s, Smith Square, earlier ones were held outdoors where it was impossible to include the type of mechanisms needed to see Jupiter descend from the heavens, as the first opera requires. Setting the operas in an airport therefore enabled him to arrive from the skies without utilising a single wire, but this was not the only reason why such a location worked so well. Airports can carry an air of glamour and decadence on the one hand, in keeping with occasions in both operas when characters are pampered, but also reveal a cross-section of figures from cleaners to VIPs, thus enabling the hierarchies inherent in the plots to come to the fore.

Gluck’s Philemon and Baucis (1769) was written for the wedding of Duke Ferdinand, grandson of Louis XV, and Maria Amalia, sister of Marie Antoinette. It sees Jupiter descend from the heavens incognito, in order to test his subjects’ generosity and, after receiving selfless hospitality from two humble lovers, Philemon and Baucis, makes them custodians of his temple so that they may live among the demigods. The flimsy plot is quite typical of many short eighteenth century French operas (and ballets) where the aim was to provide courtly entertainment, but this presentation certainly handed the piece much interest. It was set in an airport arrival lounge and, although the performance was technically semi-staged, it featured full costumes and a substantial set that stood in front of the orchestra.

The Overture featured an air traffic controller on the runway signalling in time to the beautiful music. This not only added visual interest, but made us appreciate the poetry in the movement of his arms as they carried out what would normally be a functional activity. Then in the opera we were introduced to a whole cross-section of society as Philemon became a customs official and Baucis a cleaner, and stewardesses, tourists and travellers (who wheeled their suitcases in choreographed movements) appeared. There were also a host of lovely touches so that when Philemon and Baucis, in their eagerness to serve, offered Jupiter refreshment they directed him towards the Duty Free.

The plot feels quite weak, because the point is that Jupiter has roamed Phrygia encountering selfish people before coming across Philemon and Baucis, but he only reports his treatment at others’ hands so that this pair are the first humans that we really see him come across. As a result, it is hard for us to hook onto the idea that they are the exception to what he has seen, and, by the same token, this makes his subsequent anger at the rest of the community feel strange because to us he seems to suddenly and arbitrarily snap into a rage. In spite of this, however, atmosphere was maintained through effective alterations in lighting, as well as by the costumes and, of course, music.

While Philemon and Baucis featured a translation from Gilly French, Thomas Arne’s The Judgment of Paris (1742), which describes the contest in which the shepherd judges Venus to be the most beautiful goddess, was in English to begin with. Arne set this second opera to a pre-existing libretto by William Congreve, and, as staged, the two together told of the journey from the airport’s arrivals area through Duty Free and the departure lounge to a plane in the sky. Thus The Judgment of Paris began at departures, and saw Mercury as a pilot inviting Paris to present the golden apple (here an Apple iPhone!) to whoever he judged to be the fairest. After feeling petrified at the prospect, Paris signalled his decision to accept the challenge by plucking up the courage to pass through the metal detector, thus enabling him to board the plane where the contest was to take place.

Once in the air, Paris was tended to and treated like a VIP by the three goddesses – Juno, Pallas and Venus – who were dressed as stewardesses, and who wooed him while acting out the standard safety procedures with their arms. When Pallas sang everyone strapped themselves into their seats as if the plane was encountering some turbulent weather, in keeping with her cry of ‘the glorious voice of War’ and the related ‘stormy’ music. When Paris finally selected Venus they found just a little privacy in the plane’s toilet cubicle!

Paul Wingfield conducted the chamber ensemble CHROMA superbly while the cast, which included Robert Anthony Gardiner and Robert Gildon, was extremely strong. Special accolades should go to Barbara Cole Walton who demonstrated some exceptionally clean, skilful and sensitive coloratura as Baucis, Catherine Backhouse who displayed a rich mezzo-soprano as Philemon, Aoife O’Sullivan who was beautifully voiced and seductive as Venus, and Christopher Turner who revealed a very strong tenor and excellent presence as Jupiter and Paris.

Details of its 2017 season will appear on the Bampton Classical Opera website in due course.