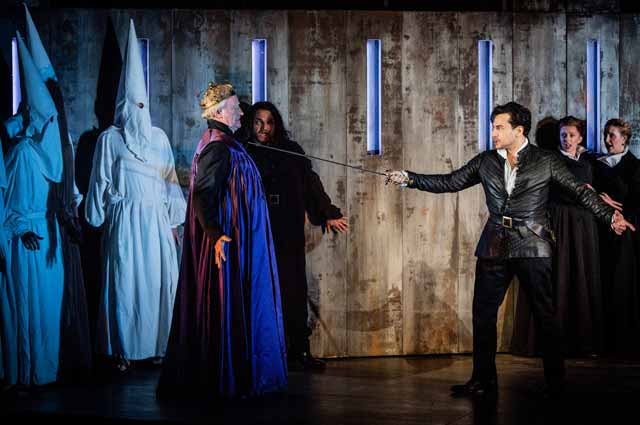 Jo Davies’ production has successfully made the transition to the new house at West Horsley, although not all of the singing could be described as festival standard. In Leslie Travers’ austere set design and with Gabrielle Dalton’s sombre costumes, all lit with melancholy sobriety by Anna Watson, it’s an appropriately gloomy take on a very tormented episode in Spanish history.

The bleak walls of the palace and the very sparse ‘garden’ give a  sense of imprisonment, not only of Elisabeth and her attendants but of the King and his personal war between emotion and the cruel dictates of the Church. In Clive Bayley’s magisterial performance as Philip II, that conflict is expressed in such a way that you actually feel sympathy for the man, which is an achievement given that the historical Philip is known to have used human torches for his wedding procession. 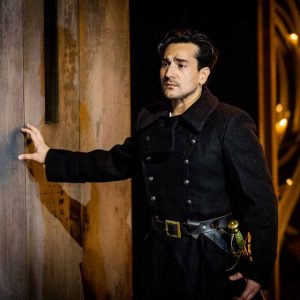 Leonardo Capalbo possesses quite a belter of a voice, and he’s good at expressing the more petulant side of Carlos’ character, but he needed more direction in the intimate scenes with Posa and Elisabeth. Brett Polegato comes near to having a genuine Verdian baritone, but he seemed a little lost at times and his death scene was not the tear-jerker it ought to be. Branislav Jatić’s Grand Inquisitor was actually almost cuddly, both in his presence and his mellow singing.

Ruxandra Dunose was the best of the women, singing with unfaltering line and lustrous timbre – ‘O don fatale’ was gripping, and she always convinced with the sincerity of her portrayal. Marina Costa-Jackson creates an elegant stage presence, but on this occasion her singing had a rather strident edge to it, possibly the result of a cold. She too seemed to need a bit more in the way of direction, especially in the crucial lovers’ farewell – from the first bars of Carlos’ ‘Vago sogno m’arrise’ this scene should be intimate and touching, but here it was hampered by too much semaphoring.

David Shipley impressed as the monk and ghost of Charles V, although one has to ask if he really should appear like something out of Elsa’s dream? In other small parts, Rosanna Harris as the Heavenly Voice and Jessica Leary as Tebaldo acquitted themselves well, and the chorus sang magnificently. The Flemish Deputies looked more like a bunch of bankers than representatives of a starving people, but did all they could to suggest their desperation.

The production’s emphasis on well managed crowd scenes does render the more intimate ones less impressive, but no such imbalance came from the performance of the English National Opera Orchestra under the baton of Gianluca Marciano. In fact, the quality of the playing and the inspired direction were among the evening’s chief pleasures – along with the rose gardens all around, still idyllic despite the dripping rain.