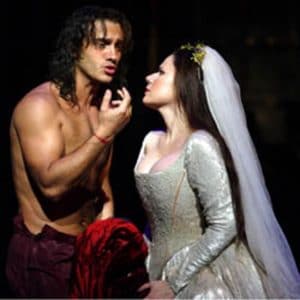 The Royal Opera’s revival of Don Giovanni is a mixed affair, with some fine component parts but a lack of cohesion in the whole. Conductor Ivor Bolton is a rare visitor to Covent Garden but on this occasion fails to impress. There’s some poor co-ordination between pit and stage and some of the tempi are terribly slow. In particular, “Dalla sua pace” and Don Giovanni’s Serenade are very drawn out, the latter more likely to send the object of the wooer’s attentions to sleep rather than to arouse her.

Individual performances are generally strong though. Erwin Schrott as the Don is every inch the seducer. You can see why women would drop at his feet; he’s virile, handsome and horribly charming. He also sings magnificently, although he tends to throw the recitatives away, missing much of the irony of the part.

Kyle Ketelsen‘s Leporello is like a wretched younger brother to his master, giving credibility to his second act impersonation. He finds a certain amount of humour in the role but overall it’s a sombre interpretation.

The big story leading up to this first night was Anna Netrebko’s cancellation due to illness and her replacement by another Russian, Marina Poplavskaya, one of the Jette Parker Young Artists. To be entrusted with the role of Donna Anna (she was already scheduled to sing once and will now also appear on Wednesday for the “Big Screen” performance), she’s clearly held in high regard by the management. The first night audience was certainly impressed by her powerful and expressive soprano and she has a big future in front of her.

The interpretation of Donna Elvira as a gun-slinging harridan is questionable but Ana Mara Martinez carries it off effectively, with some great coloratura and lovely lower register. Michael Schade brings presence to the often overlooked tenor role, the long-suffering Don Ottavio. His two big arias left something to be desired but his duet with Poplavskaya in the final front-of-curtain scene was as good as any singing all evening.

Francesca Zambello‘s production has its strengths. There is a sense from the very beginning that the opera is about the unravelling of Don Giovanni’s life. Abuse comes across strongly as a theme. When Donna Anna unburdens herself to Ottavio about Giovanni’s rape of her, it rings true as something that all too often goes “unconfessed” even today. Masetto (a strong performance from Matthew Rose) is as abusive in his oafish way towards Zerlina as Don Giovanni is in his more elegant and aristocratic manner.

Unfortunately, many of the weaknesses also lie in the direction and in Maria Björnson‘s designs which are ugly and uninteresting. The Don’s descent into hell is excitingly staged but much else is dull and indicative of a team lacking in inspiration.

This isn’t a great Don Giovanni and I suspect most people will be going to see one or other of the performers Netrebko when she’s back or Erwin Schrott in particular. Those who catch Poplavskaya will be seeing a star in the making.

The performance on Wednesday 13 June will be broadcast live on giant screens in the Covent Garden piazza plus locations in other cities around the UK.

To read our interview with Erwin Schrott, click here