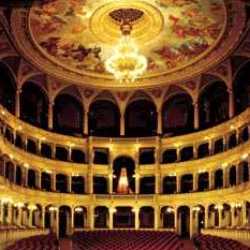 Though currently struggling with managerial problems, visits to the Hungarian State Opera House in Budapest represent excellent artistic value for money. For the British opera lover, seat prices will feel like manna from heaven. Opera has been performed in Hungary for over 300 years: initially in royal castles (as in the Esterhazy estate where Haydn was employed for 30 years), later in various theatres. The magnificent Budapest opera house, the work of architect Miklós Ybl, was designed specifically for opera and ballet. It took nine years to build and was completed in 1884.

Apart from distinguished Hungarian artists, the Budapest opera hosted many wonderful foreign artists during its history. Gustav Mahler was music director from 1888 to 1891. Giacomo Puccini had a strong association with the company: he himself coached them for his operas Madam Butterfly and The Girl of the Golden West. Otto Klemperer was music director between 1947 and 1950. More recently such singers performed there as Giuseppe Taddei, Giuseppe di Stefano, Theo Adam, Giulietta Simionato, Montserrat Caballé, Renata Scotto, Boris Christoff, Plácido Domingo, Piero Cappuccilli and Luciano Pavarotti.

The most interesting feature of the Hungarian State Opera House autumn 2006 Don Giovanni production was the lack of any conflict between stage direction and musical interpretation. Indeed, Gergely Kesselyák was both the stage director as well as the conductor. During the performance I sat very close to him and I could hear/see him sing all the arias – in Italian, as Hungarian State Opera sing in the original language with Hungarian surtitles. Conductor/stage director Kesselyák clearly knows Don Giovanni inside out and he delivered a truly high quality performance.

Don Giovanni performances in Vienna conclude with the Don’s death. Elsewhere we are used to the final sextet as the conclusion to the piece. Here in Kesselyák’s stage direction an ingenious device was used: while the Don was going down to hell, the orchestra pit (complete with orchestra, conductor and piano) was raised to stage level. The final sextet was thus performed as an epilogue rather than a part of the plot. This solution made perfect sense and – with all musicians on stage level – it resulted in gloriously triumphant and uplifting (if you excuse the pun) sound.

I was surprised that a regular modern piano was used for the recitatives, though with a regular modern orchestra the argument for a fortepiano or harpsichord (as used in London opera houses) is debatable.

The cast was excellent, although Donna Elvira (Beatrix Fodor) seemed miscast: she sounded as if she should have sung Donna Anna. Levente Molnár was a charismatic, truly convincing Don Giovanni, Orsolya Sáfár a particularly charming (though somewhat aristocratic) Zerlina. Hungarian State Opera is maintaining its long established standards. Long may they continue to do so.