by Gareth Webb
published: 1 May 2006 in Opera and Classical Reviews
Tweet 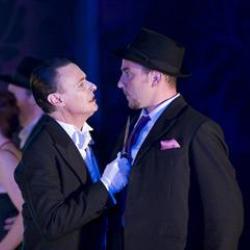 This was a very big night for Scottish Opera.

For over a year the company has been dark and extremely quiet, presenting no staged productions in this time, with an overbearing financial crisis and a new takeover hindering their creativity.

However, this new production directed by Tim Albery and conducted by Richard Armstrong proves that, without doubt, Scottish Opera is a world-class opera company producing first-rate operas.

Don Giovanni is a man who can get anything he wants – wine, song and especially women; as we learn in Leporello’s ‘Catalogue’ aria, his master has slept with over 2,000 ladies. A story that could be a standard comedy is quickly transformed into a dramma giocoso (a genre mixing comic and tragic elements) with an avenging spirit forcing the Don to make a final repentance in life or face the very literal descent into hell.

In this Don Giovanni, the music shines through and the orchestral and vocal accomplishments are its main strength. The production overall appears strained and slightly disjointed at times but it does not take anything away from the brilliance of the performances. The set, designed by Tobias Hoheisal, is unimaginative but stunning in its simplicity, as the deep damask wall and black front stage convey a self-created hell-in-life for Don Giovanni. Movement from a series of doors in the red wall and a blinding white set behind them, as well as descending chandeliers and a silhouette graveyard, all make for an effective staging.

Peter Savidge is given the task of portraying the flippant, sly and often ruthless Don pursuing pleasure through Europe and he does a fine job. But this is an opera that lays less focus on its central character, with stage presence and arias at a low. The seemingly less important characters of the plot take centre stage and all do the roles justice. Caitlin Hulcup as Zerlina has a perfect clarity and purity in her voice and so the devious aria ‘Vedrai, carino’ has the whole audience and not just Masetto (played with a necessary brutish force by D’Arcy Bleiker) wrapped around her finger.

As the truly tragic figure Donna Elvira , Henriikka Grndahl plays more upon the scorned woman rather than the abandoned lover which, although perhaps unconventional, gives her character more identity and strength.

Maria Costanza Nocentini as Donna Anna and Hilton Marlton as Don Ottavio both give solid and, at times, truly emphatic performances as the troubled lovers. Nocentini persuades the audience in the aria ‘Or sai chi l’onore’ that her pursuit of Don Giovanni to avenge the murder of her father is one of sincerity and passion, whilst the moralistic insecurity of Don Ottavio is conveyed with necessary fragility by Marlton in ‘Dalla sua pace’.

This production plays heavily upon the tragedy in the opera and there is a real sense of moral struggle amongst all of the characters, except of course Don Giovanni. However, the comic elements of the libretto and score are not lost and the audience still laughed at the witty rapport between the Don and his bumbling servant Leporello in their many recitatives.

But the focus on the tragic should not be overlooked or sneered at because it helps to convey the significance behind the tale: while Don Giovanni pursues pleasure on his own terms and breaks moral boundaries to do this, behind him is left a trail of death, grief and distress. Mozart and Da Ponte’s depiction of the Don’s descent into hell because of his lifestyle as well as the enchanting sextet of the opera’s epilogue identifies the effect that we, as humans, all have upon one another and that one day our transgressions will be resolved.

This was a night of pure brilliance that should shame corporations in Britain for not financially supporting the company sooner. This production is not perfect, but it is a fine example of real opera for a modern age. This Don Giovanni is a warm welcome back for the company, and let us hope that the lights never again go out for Scottish Opera.