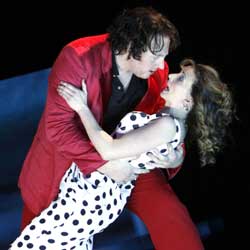 Dump the devils? Can the crown of thorns? Perhaps surprisingly, no I actually enjoyed Rufus Norris’ Something-to-offend-the-whole-family production of Mozart’s masterpiece, so often the Scottish Play of operas.

Many friends there on the first night assumed I’d hate this for its intrusiveness, but there is more than one kind of intervention. What I object to, and we had to endure in the recent Idomeneo, was the irrelevant intrusion of supernumeraries and the vacuous employment of wonky little electrical bits and pieces which had no semblance of relationship to the work. However, with this Don Giovanni, technology is used relevantly, and sometimes to hilarious effect, as in the Catalogue aria, and such extraneous twirl-ons as there are, do not distract from the singing.

That singing is of variable quality, with not much in the way of world-class work, although little that is provincial either. Iain Paterson looks like Jonathan Ross after a particularly long binge, and he does his best to portray the directors concept of a devil-may-care (pun intended) seducer, but at present he comes across as rather lovably shambling. His voice is beautiful, with a honeyed legato and burnished sheen on top, but on this occasion he was not at his best, with a Champagne aria lacking in sparkle and a muted serenade.

Brindley Sherratt’s Leporello was also somewhat pallid, with only the Catalogue or rather Spreadsheet aria really taking off, and his recitative could do with more incisiveness to match Andrew Smith’s exceptionally crisp continuo. Robert Murray did not have to contend with quite so much distraction as he did when singing Idamante, so he was able to give a more accurate impression of his talent, which is considerable; this is a lovely, if small, Mozartean voice, and he coped well with Dalla sua Pace. Matthew Best’s Commendatore and John Molloy’s Masetto were both strongly characterized.

Amongst the women, Sarah Tynan was a predictably delectable Zerlina, singing with the poise denied to her Ilia, and creating a lovably convincing character. Sarah Redgwick was standing in for the indisposed Rebecca Evans, which made her stage confidence, forthright phrasing and ringing tone all the more remarkable. Katherine Broderick’s Anna belts it out, but she is clearly not ready for singing at this level.

Orchestrally, Kirill Karabits was not quite the dynamo I had been expecting, but he encouraged an elegant, classical account of the score from an orchestra which sounded a bit depleted. The translation varied from witty to banal, which makes a change from mildly amusing to execrable.

Ian MacNeil’s set designs, inspired by the bleak urban townscapes of the photography of Lewis Baltz, allow the action to unfold without too much distraction. MacNeil and Norris have worked together before, and it shows; the flexible, sliding panels which can suggest either tacky boudoir or bourgeois home, skilfully manoeuvred by the Watchers who are variously Giovanni’s servants and alter egos, and the genuinely frightening figures which appear at his demise, are all of a piece with the detached, nihilistic flavour of the evening.

Giovanni’s descent into hell is not so much being consumed by flames as fried by crown of thorns, which has a kind of logic to it, and the Jesus crucified illustrations worn on T-shirts at various times are perhaps a rather laboured symbol for the Don’s antichrist aspects, but Ive seen far more absurd things on this and many other stages.

Naturally, the interval air was thick with “Disgraceful!” and “Should be shot!” with most of the critics assembled for drinkies looking thunderous. Oh come on, chaps I loved it, but then all I require from a director is that he respects the music, gives the singers interesting stuff to do, and doesnt intrude on the action. In all of these areas, Norris succeeded, and Im sure that such controversy as is created by this production will help it to gain the success it deserves.