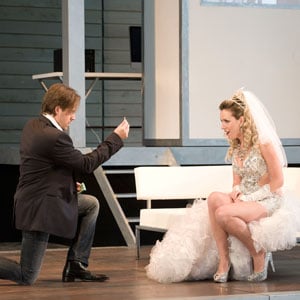 You’re shivering in a soggy field under flimsy canvas, being sort-of served by sloaney gels, your company is composed of an Earl, two Lords, a Count (yes, really) and a fellow in a kilt who must be somebody but you’re not sure who. You’ve just emerged from the first act of a slaggy-ladettes meet sleazy-nobs production of Don Giovanni. Yes, you can only be at Garsington – certainly not at Glyndebourne, where a few nights previously the only slags were busily smoking in the gardens and the Lords and Ladies seemed to have gone a-prancing, or whatever it is they do.

This new production, by Daniel Slater with designs by Leslie Travers, is one of those effortfully modish, ultra-modern jobs which would probably enthral you if you haven’t seen anything like it before. Those of us who have took one look at the computer screen and instantly sussed that the ‘non picciol’ libro’ would emanate from there, and that the Don’s dinner entertainment would be selected by tablet. As with all of these things, some of it worked, some did not. Leporello as a TV chef was fine, as indeed was the print-out of the Don’s conquests and the cupcake and double-shot dispensers at the party (don’t ask) but there’s also a lot that doesn’t gel. To put it mildly, the concept of Anna as a dominatrix and then a prison warder does not quite go with her story about how she fought off her assailant, and as for Giovanni telling her that she’ll never discover who he is, when she has been practically licking his face for the past five minutes, is seriously flawed.

It was very welcome to see Don Ottavio taking charge of things, even if that meant some shenanigans with the Commendatore’s corpse, and the latter’s ‘death’ and Giovanni’s incarceration rather than immolation were, shall we say, interesting. Zerlina is no innocent here, kitted out in a sort of my-small-thin-Essex-wedding dress, and attended by ladettes in bright orange slag-wear. It all felt a bit weird, to be candid – on stage, low-lifes brawling, even Donne clawing at each other (why?) for all the world just like Cardiff on a Saturday night, and on the other side of the stage, the ‘Great and the Good’ fresh from their Oxfordshire mansions, surveying the scene.

The singing? All young voices, all with great promise, but one might feel it a bit unfair that the already-risen and well established Sophie Bevan, with major roles in major houses already under her belt, was singing Elvira, since she was so vastly ahead of the rest in experience, confidence and sheer vocal prowess. She is a real team player, though, which was just as well as her sister was playing Zerlina; Mary Bevan has talent but perhaps her characterization subdued her singing here. Natasha Jouhl had a hard time of it as Anna – was she supposed to be a deceiver, or not? Some of her singing was, unsurprisingly, raw-edged.

Grant Doyle swaggered charmingly as the Don, although I found it hard to see him as a libertine – just too much floppy-haired schoolboy, perhaps, and it did not help that he had to deliver his serenade to the pit. Where was that luscious maid, and where the mandolin? The voice is secure, though, and he has a definite future as a lyric baritone. Joshua Bloom’s Leporello was the audience favourite for his unaffected acting and lyrical singing, although the latter lacked force at times. Jesús León coped well with all he had to do as Ottavio and sang a commendable ‘Il mil Tesoro’ which is no mean feat even when your character is not faced with sullen companions.

Christophoros Stamboglis was a hefty Commendatore in every sense, and he too coped well with some unusual demands. Callum Thorpe’s Masetto showed some star quality here and there, and the playing, under the sometimes rather meandering direction of Douglas Boyd, was supportive of the singers and will surely sharpen up as the season progresses. Pouring rain accompanied the second act (spectacularly down the glass walls of Robin Snell’s beautiful but not yet quite user-friendly pavilion) and the departure of the audience, but we Brits – from Lords and Ladies down to lowly critics – went home happy, and will do it all again with pleasure.