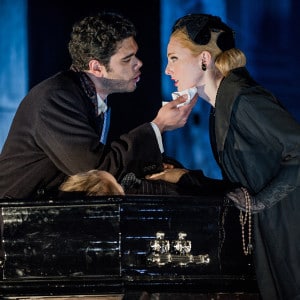 “The greatest of all operas…”, “The Director’s Graveyard”. Mozart’s Don Giovanni has often been assessed as both of these, and Glyndebourne’s revival of Jonathan Kent’s production shows why it is possible to do just that. On its first outing in 2010, this version was admired by many and loathed by some, and it’s likely to be the same this time around.

This is an admirably straightforward reading despite what might sound like a few oddities, and if you’re new to opera or just feeling your way in, then Kent’s reading (revived here by Lloyd Wood) will certainly have you coming back for more. Paul Brown’s beautiful ‘Light Box’ design, inviting comparisons both with the treasures to be gained from exploration and the disasters threatened when Pandora opened her own box, still enchants – as does the contrast between Giovanni’s debauchery and the cool, ordered civilization evoked by the background colonnades and crescent moon. On this first night, though, it felt as if things had not quite come together.

The same was true of the singing; there are some fresh young voices here, but they often sounded tentative, with quite a few lumpy phrases and intrusive aspirates. The cleanest, most Mozartean singing came from Ben Johnson’s Ottavio, so it was a pity that this version deprives him of ‘Il mio Tesoro’ in favour of a ‘not-exactly-one-of-Mozart’s-hundred-best’ duet for Zerlina and Leporello. Lenka Máčiková looked fabulous as the former, got up to resemble Marilyn Monroe and singing with much allure in Act I although she seemed to tire as the evening wore on. Edwin Crossley-Mercer was a feisty Leporello although his acting was more forceful than his singing, and Brandon Cedel sang with a firm line and much confidence as an un-oafish Masetto.

The two donne were distinct personalities with fine voices, although Serena Farnocchia’s Elvira provided the most consistent and idiomatic singing, ‘Mì Tradi’ displaying some gleaming top notes. Layla Claire found the ‘Non Mì dir’ cabaletta a strain but otherwise provided a sympathetic and often finely phrased Anna. Taras Shtonda had much to cope with as the Commendatore, and did so with aplomb, his bass ringing out with more confidence than we had any right to expect after what he has to endure.

Elliot Madore garnered many accolades after his house debut in the 2012 Ravel ‘double bill’ so expectations for his Giovanni were high; he did not quite fulfil them, partly owing to the production’s somewhat muted concept of his character – this Don is suave rather than evil – and partly to his rather soft, at times not always distinct, phrasing. He serenades better than he seduces, and much better than he slays; he has the ideal voice for the role, though, and he’s likely to make more of it as the run proceeds.

Andrés Orozco-Estrada was making his Glyndebourne debut, and his direction of the LPO, of which he is soon to be Principal Guest Conductor, was always musical if at times displaying the slightly tentative feel of the whole evening. The overture was lugubrious rather than sparkling – which some might say is the right way to go – and although he provided mostly sensitive support for the singers, there were times when he could have driven things on more assertively. Gareth Hancock and Francis Bucknall supplied some sparkle in the continuo, and the Glyndebourne Chorus did Jeremy Bines proud yet again.