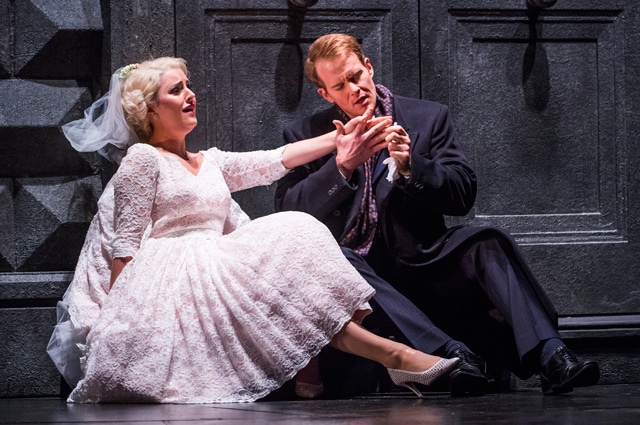 The 2016 Glyndebourne tour, featuring Don Giovanni and a ‘first’ for the company, a new production of Madama Butterfly, also includes Behind the Curtain which goes ‘behind the scenes’ of Mozart’s opera to see how a work is brought to life. Jonathan Kent’s 2010 production is an ideal vehicle for this, since it is ‘traditional’ without being stuffy and up to the minute without feeling any need to do anything daft such as having Anna gagging for sex with the Don or bringing in squaddies with AK47s to scale the building during Giovanni’s shenanigans.

Duncan Rock’s Tarquinius in The Rape of Lucretia for the 2013 Glyndebourne Tour, and his Demetrius for this year’s Festival Midsummer Night’s Dream both promised much, and his Giovanni did not disappoint. His voice is on the light side for the part, but that did not prevent him from giving a lusty account of the ‘champagne’ aria, and he used it to very fine effect in the ‘serenade,’ as beautifully sung as you’ll hear anywhere. Why that did not get any applause is a mystery – perhaps the audience was too busy wondering what on earth snow was doing falling copiously onto the streets of Seville.

Rock’s partnership with Louise Alder’s feisty, exceptionally well sung Zerlina yielded a performance of ‘Là ci darem la mano’ which approached very near perfection. His sparring with Brandon Cedel’s at times effortfully acted Leporello was perhaps less successful, although Cedel’s is clearly a voice to listen out for. Anthony Gregory was a weedy Ottavio in terms of characterization, although his very sweet, light voice would have been good to hear in ‘Il mio tesoro,’ unfortunately lost here in favour of the rather tedious duet between Leporello and Zerlina. 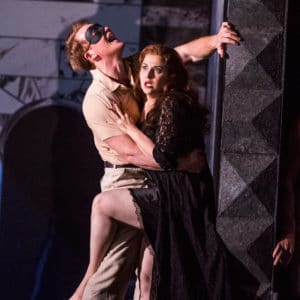 The Polish soprano Magdalena Molendowska has sung small roles for Glyndebourne but Elvira marks her house debut in a major role; this recipient of the 2013 GSMD Gold Medal has one of the most secure, creamy voices we’ve heard in this part, and her big arias were as exciting as they should be. Anna Maria Labin’s Anna made a more subdued impression, first night nerves possibly affecting a few notes – and did she have to be so murkily lit? Nevertheless, she sang beautifully in the ensembles and rebuffed poor old Ottavio with persuasive phrasing.

Pablo Gozález directed the Tour Orchestra with considerable élan, producing playing which would not sound amiss from many more experienced orchestras. Jonathan Kent’s rather sombre production, chiefly notable for its clever revolving ‘box’ which opens to reveal scenes which go from compressed evocations of de Chirico colonnades to sloping graveyards, has been faithfully revived by Lloyd Wood. Paul Brown’s design still looks beautiful, if a little too dark at times, and the ‘difficult’ scenes such as the Commendatore’s graveyard appearance and Giovanni’s descent into hell, are excitingly done.

There are five more performances at Glyndebourne, after which the production moves on to Milton Keynes, Canterbury, Norwich, Woking and Plymouth.