An innovative take on Mozart’s classic fills the hills of Leicestershire with 17th century rituals! 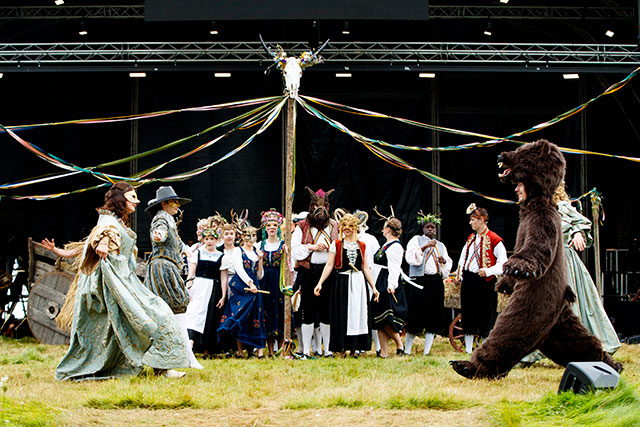 In a programme note, director Sam Furness describes his intention in this production of Don Giovanni to treat “the nuptial rituals of Zerlina and Masetto as a unifying backbone, which the rest of the action can swirl around”. It is the type of idea that sounds good on paper, but it does leave one wondering whether the execution will push certain points to extremes, or conversely see them fail to register at all. In the event, however, the concept works well because it plays upon the outdoor setting that potential COVID-19 restrictions dictated should be used for Nevill Holt Opera’s 2021 season.

The action is set not in the 18th century when the opera was written, but rather the 17th century to coincide with Don Juan’s appearance in Tirso de Molina’s play El burlador de Sevilla y convidado de piedra. Furness decided on this period because it “allows the class and gender power dynamics to emerge clearly” with Don Giovanni attacking “the ‘social glue’ by interrupting, denying, and desecrating the ceremony of marriage”. As with La traviata, which was staged earlier in the season, the open air performance space is covered in turf with three ramps, the entrances and exits for the performers, running up to it from the left, right and centre. During the Overture the peasant community appear on the stage and perform a ritual around a small ‘wicker man’. It is especially effective because there remain periods when the chorus members stay still so that the routine does not overly distract from the music, but they do not burn the man at this stage, with the reasons why becoming clear at the end. 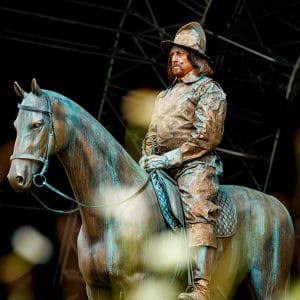 One of the great strengths of the production is the way in which it allows us to focus on the ‘micro-’ or ‘macro-world’ as we wish. For example, during the ‘catalogue aria’ the central stage is occupied by Leporello and Donna Elvira alone, with there being lots of excellent touches as she takes the book from him and rifles through its pages. Then it is ‘unfurled’ so that its continuous pages run the length of the stage, with Donna Elvira’s face saying it all as she realises she is just one line amidst the thousands of names to be found there. We can choose to focus simply on this but completely offstage, in front of Nevill Holt’s permanent opera house, the peasant community perform rituals in preparation for Zerlina and Masetto’s subsequent marriage procession. The two ‘arenas of action’ are so removed that one does not distract from the other, and one of the delights of the production is that different seats provide views of different things meaning that no one will see everything that occurs offstage. There are still times when the chorus occupy the stage as well, so that Zerlina’s winning over of Masetto during ‘Batti, batti o bel Masetto’ becomes a public event witnessed by the whole community, while the use of three orchestras in Act I’s Finale is managed well. Although they all need to be stationed under the covered stage that lies behind the performance area, so cannot be spread out, three distinct areas of dancing are established, which fulfils the basic function of showing how different things occur simultaneously at this party. A huge maypole occupies the main stage, while a smaller dance takes place below the stage on one side and a fire eater appears on the other.

The Commendatore in Act II is dressed in rusted bronze clothes so that he can rise out of his tomb and sit astride a horse as part of an equine statue. There are also deliberately anachronistic elements including Don Giovanni’s feast becoming a picnic as might be enjoyed by many during the long interval. The attention to detail throughout is excellent so that during ‘Non mi dir’ Don Ottavio thrusts a clod of earth into Donna Anna’s hand as if urging her to bury her father metaphorically as well as physically so that they can move on and marry.

It would be wrong to give the ending away, but, though it is quite macabre, it is so inventive that it is hard for it not to leave a smile on one’s face! The implication is that the community as a whole secure Don Giovanni’s descent to hell by scapegoating him. It also sees a number of other things that have taken place throughout the evening make sense, such as why the ‘wicker man’ is not burnt at the start and why, in this production, the community do not move in for the kill at Don Giovanni’s earlier party, because the time is not yet ripe. So impactful is this ending that, while Zerlina and Masetto simply tuck into the remains of Don Giovanni’s picnic during the Epilogue, not everyone is able to move on in the same way. As Donna Anna pleads with Don Ottavio to give her another year to mourn, we feel she is actually preoccupied with thinking “what just happened there?” because we are wondering exactly the same!

The Shadwell Ensemble, under the baton of Finnegan Downie Dear, delivers an extremely fine account of the score, while the cast is very strong. First among equals are Anna Patalong, who played Fiordiligi for Longborough Festival Opera earlier this summer, as Donna Anna, and Aoife Miskelly as Donna Elvira, with both performances feeling as heartfelt as they are undoubtedly accomplished. Joshua Owen Mills gives a beautiful rendition of ‘Dalla sua pace la mia dipende’ and though by the same token we do not hear ‘Il mio tesoro’, which does not feature in the 1788 Vienna version that is performed here, there is compensation by virtue of what that does include. In particular, ‘Per queste tue manine’ is executed well as Zerlina (a splendid Olivia Warburton) runs rings around Leporello (Nicholas Crawley’s bass-baritone packing a punch throughout the evening). Benedict Nelson is also excellent as Masetto, as is Dingle Yandell as the Commendatore, with his voice often being amplified more than the others in the outdoors to create a ghostly effect. Finally, Seán Boylan is a far more foppish and likeable Don Giovanni than in many other portrayals of the character, where the brand of charm can feel more overtly sinister, but proves no less effective in the title role for that.

Don Giovanni continues at Nevill Holt Opera until 25 August 2021. Details of NHO’s 2022 season and other future events will appear on the NHO website in due course.