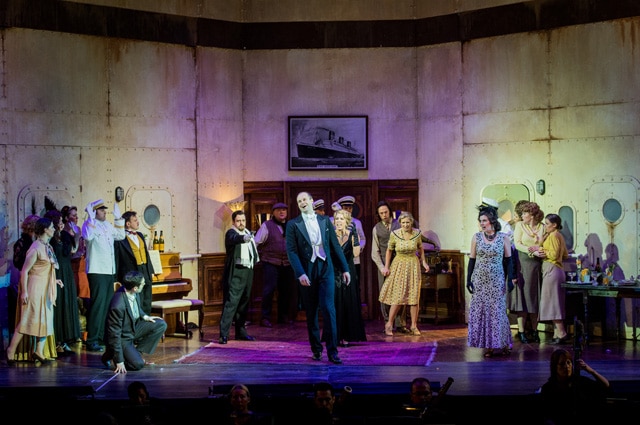 Don Giovanni can work in any number of times and places, provided that the social hierarchies that underpin the story are not sacrificed. Oliver Platt’s production for Holland Park not only succeeds in retaining the class system involved but, by being extremely innovative, delineates it to the full.

Platt and designer Neil Irish set the entire drama on a cruise ship, and from the outset we are aware of the hierarchies at play. During the Overture everyone boards the ship with the richest being directed towards the first class cabins and everyone else to the second and third. The act of placing the drama within a discrete and specific area also affects the dynamics of the scenario, but in a positive way. For example, it is harder to have any privacy on a ship when there will always be someone else on deck, but this fact is written into the staging. For example, when Don Giovanni turns on Leporello for criticising his lifestyle, he looks as if he is about to take a swing at him before backing down and smiling when two passengers pass by.

More generally, when we see people lying around on deckchairs as Don Giovanni goes about his business, the implication is that he operates not in the shadows but virtually in broad daylight. This does not mean that everyone knows just how bad he is, but there seems to be a general acceptance that on such a cruise a VIP can behave more or less as he pleases. Similarly, when Don Giovanni encounters Zerlina and Musetta’s wedding celebrations, while it may initially seem strange that people should enquire about a man who is simply passing by on the deck, there is a reason for why they do so. They are surprised to see a first class passenger on the third class deck, which in this context is quite out of the ordinary. 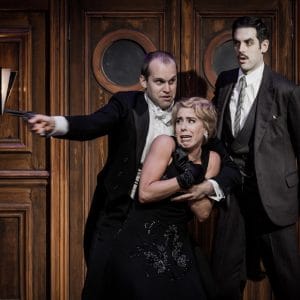 Although certainly not extreme, the production feels a little more hard hitting than most as the Don exacts his escape at the end of Act I by pointing a gun to Donna Anna’s head, and blood splatters across the wall when he kills the Commendatore. The latter’s corpse is carried off by crew members, and there is even a solution to the problem of how he could be buried and a statue erected to him on a ship. In the event, Don Giovanni and Leporello hear the Commendatore’s voice but do not know where it comes from, before rolling back a sheet to discover that his body has been unceremoniously placed in a cold store for the remainder of the cruise.

When Donna Elvira sings ‘Mi tradì quell’alma ingrata’ she nearly commits suicide by jumping overboard before concluding that there is still a man she needs to rescue. Don Giovanni jumps overboard at the end, with the accompanying bright light emphasising that this is his descent into hell, and not him escaping his fate. The end of the Epilogue is also interesting as it reveals how Donna Anna, Don Ottavio, Zerlina and Masetto are essentially able to resume their lives, but that Donna Elvira and Leporello are left not knowing where to go as their own existences were so bound up with the Don’s.

Dane Lam conducts well, while Ashley Riches is good in the title role with his smooth baritone and natural presence. Holland Park, however, is quite a large venue to fill, and while it is not a bad thing to hand the Don a sense of effortless charm, he does not give the character the bite and charge that would really enable him to fill the space. John Savournin as Leporello could also afford to assert his character a little more, but his pleasing voice sees him execute ‘Madamina, il catalogo è questo’ well, and the persona he adopts is quite convincing. He may hate himself for supporting the Don, but he is the perfect front man for his party as on the surface he shows no doubts whatsoever.

The standout performances, however, come from Lauren Fagan as Donna Anna, whose brilliant soprano is vibrant and assured, Ian Beadle who reveals a very strong baritone as he completely enters the character of Masetto, and Graeme Broadbent whose bass could hardly be bettered in the role of the Commendatore. This does not mean, however, that there is any cause for complaint with Victoria Simmonds’ immensely spirited Donna Elvira, Ellie Laugharne’s beautifully sung Zerlina or Ben Johnson’s highly enjoyable Don Ottavio.

Opera Holland Park’s 2017 season runs until 29 July, with a week of film screenings following this. For details of all events, including some cast variations for Don Giovanni, visit the Opera Holland Park website.