A Mozart revival at the Royal Opera is more than welcome. 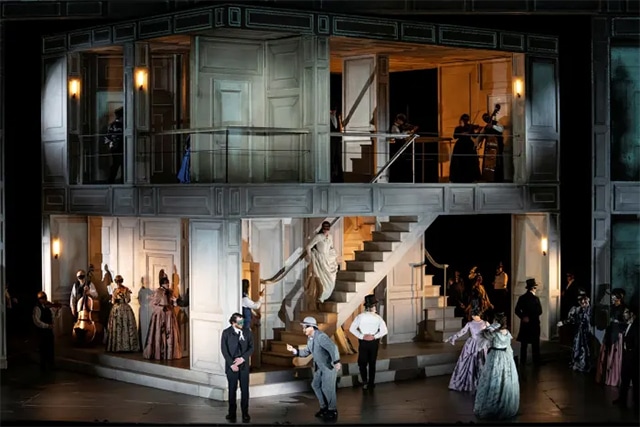 Kasper Holten’s audacious seven-year-old staging of Mozart’s dramma giocoso made a welcome return to the Covent Garden stage last week, intelligently cast and like their La Bohème, Covid-safe. Having seen this production when it was new, and at its second revival (which fielded an outstanding cast), the changes revival director Jack Furness had to make were less drastic than those required to bring Richard Jones’ staging of Puccini’s evergreen masterpiece to life. But as Mozart doesn’t require a large chorus and numerous extras, Furness undoubtedly had the less onerous task.

Repeat viewings certainly haven’t diminished the impact of Holten’s approach. In his eyes the opera is an illusionist nightmare, with the protagonist gradually descending into madness, rather than being dragged to hell by the statue of the Commendatore. This sense of Giovanni teetering on the edge is reflected in Es Devlin’s multi-faceted and flexible stage design – a box of tricks that’s flexible enough for the myriad scene changes to morph into one another effortlessly – and Luke Hall’s video designs. Much maligned when new, this time round they blend effortlessly into the stage pictures, aided and abetted by Bruno Poet’s evocative lighting plot.

It has to be said that Holten’s take on the opera doesn’t always fit with what we assume Mozart had in mind, most notably in the final pages. The final sextet is truncated, with the last section sung from the wings, while Don Giovanni clasps his head and somewhat awkwardly waits for the final blackout. Three years ago, the finale was dispensed with altogether, which given the bleakness of the staging made far more sense. 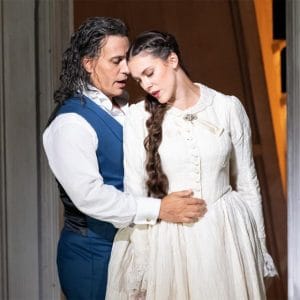 Erwin Schrott is no stranger to the title role at this address. He looks the part and managed to subdue his natural ebullience to fit in with Holten’s take on the character. His voice has darkened over the last few years, which complements his brooding stage presence. Gerald Finley was the perfect partner as an urbane Leporello, singing mellifluously throughout the evening – his Catalogue aria delivered with the perfect blend of humour, horror, and outrage.

Once past a tendency to sing sharp, Adela Zaharia’s imperious Donna Anna, was a constant delight. With a perfect technique, and creamy tone, her delivery of ‘Non mi dir’ was the vocal highlight of the evening. Nicole Chavalier’s fiery, impassioned Donna Elvira rose to the technical challenges of ‘Mi tradi, quell’alma ingrata’ while Zuna Marková was a delightful Zerlina. She was ably partnered by Michael Mofidian’s virile Masetto – definitely a talent to watch.

Frédéric Antoun was a forthright Don Ottavio, who in this performing version is given both his arias. Mellifluous in ‘Dalla sua pace’, and not afraid of adding some ornamentations to ‘Il mio tesoro’, he made this music sound easy. Maybe his voice is a notch too small for this role in this house, but what he lacked in volume, he more than made up for in style. Adam Palka boomed effectively as the Commendatore.

It was a shame that there wasn’t a more coherent view of the work from conductor Constantin Trinks to support such a homogenous cast. His leaden tempo for the overture , and Leporello’s opening ‘Notte giorno faticar’, sapped the energy out of both. From then on, his stop-start approach became irritating and at times pit and stage coordination went awry. Despite this, the orchestra played well – but it’s a shame there wasn’t a more galvanising presence on the podium.

More details on this production can be found here.