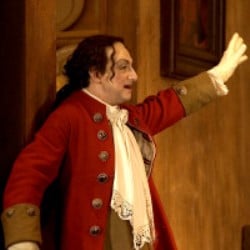 Donizetti’s Don Pasquale at the Royal Opera House is delightful entertainment of a high quality.

I enjoyed the evening, so my reservations should not discourage anybody from going.

For one thing, I have problems with the plot: depending on your viewpoint it is either a lesson to old people not to fancy their chances (for instance of marriage, especially to beautiful young ladies) or it is a display of money grabbing through dishonest scheming.

Wealthy and old Don Pasquale wants his nephew Ernesto to marry a rich woman, but Ernesto is in love with the penniless widow Norina. As Don Pasquale threatens to disinherit Ernesto (who apparently could not marry Norina without his inheritance), their friend Doctor Malatesta devises a scheme to help them get their way. Norina, in disguise, acts as Malastena’s sister and pretends to marry Don Pasquale. After the fake wedding she gives him such a hard time that he begs for divorce and gives his blessings (and money) for Ernesto’s marriage to Norina.

Jonathan Miller’s production, now revived by Daniel Dooner, places the whole opera in a doll’s house. Presumably the logic is that these characters are not like real people as they are manipulated to behave in a certain way. But Doctor Malatesta (and even Norina) seems to me dangerously realistic, which makes the doll’s house idea questionable. In addition, there is a very confusing element: at the opening of this production we see Ernesto and Norina leaving Ernesto’s bed. Or is it Norina’s bed? That top floor of the doll’s house seems to be serving both as Ernesto’s quarters in his uncle Don Pasquale’s house but also as Norina’s home. This seems to me nonsense.

The doll’s house is pretty to look at and all action on stage is very well acted. Seeing the chorus fussing about in their silent servants roles I was apprehensive about their ensemble singing. However, when in their singing roles, they faced the audience and delivered perfect sound and ensemble.

Conductor Bruno Campanella clearly knows the score. Indeed, this music seems to be in his blood. Apart from some insecurity during the solo cello introduction (when I was not quite sure whether the conductor was waiting for the solo cello or vice versa), Campanella had full control of the score as well as his singers and orchestra. This was not easy as the singers were on the first or second floor of the doll’s house a very long distance from the orchestra pit most of the time. Campanella’s slow tempo of Don Pasquale’s finite was heartbreakingly beautiful. The aria sounded as if life came to an end (which was exactly what Don Pasquale feels at that time).

Of the four principal singers, three Eric Cutler (Ernesto), Aleksandra Kurzak (Norina) and Christopher Maltman (Doctor Malatesta) – sang their roles for the first time. They sang in Italian though none of them are native Italians. Donizetti’s vocal lines are beautiful and full of invention but also difficult to sing, especially if the singers are placed as in this production – a long way above the orchestra. All three singers did an excellent job, but I would love to hear them at later performances. Cutler was slightly wooden, but then again, so is his character Ernesto. His intonation in the famous serenade (Com’ e gentil) was not constant. Kurzak ideally cast as Norina – slightly missed the pitch in some of her top notes which, admittedly, are very high indeed.

Don Pasquale was played by Alessandro Corbelli, who sang the role recently in Germany and in Italy. He is a wonderful, true bel canto singer and Italian is his mother tongue. His performance alone is worth a visit to see this production. Pasquale and Malatesta’s famous comic duet Aspetta, aspetta, cara sposina (Wait, wait my lady) was brilliantly performed by Corbelli and Maltman.

The orchestra was fully supportive during the whole performance. Unusually for the opera repertoire, the first trumpet has an important solo in Ernesto’s aria Cercher lontana terra (Seeking refuge in a faraway land). A gentleman behind me in the audience reckoned that this trumpet solo was the highlight of the evening; I thought that it was good trumpet playing but I would have liked the player to sing more on his instrument.

Musicologist Emanuele Senici tells us in the excellent programme notes that Donizetti wanted his Don Pasquale cast to wear regular clothes for their roles. Designer Isabella Bywater gave us fancy costumes which were very pretty to look at. Ernesto, Norina and Don Pasquale wore subdued colours but Doctor Malatesta sported a bright red coat. Perhaps stage director Doctor Jonathan Miller wanted to make quite clear that it is the doctor who stages and manipulates characters and events.