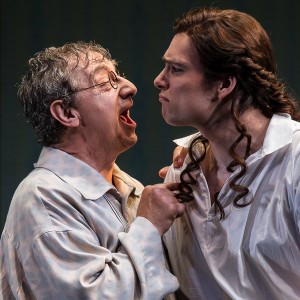 Like Il barbiere di Siviglia and Der Rosenkavalier, Don Pasquale is the story of an ageing gentleman attempting to put himself between two young lovers. Donizetti’s 64th opera, however, does not possess as many twists and turns as, say, Il barbiere or Le nozze di Figaro because the plot to thwart the antagonist is executed with relatively few obstacles being thrown in the way.

If, as a result, the narrative risks losing our attention, Mariame Clément’s slick production for Glyndebourne Festival Opera, developed from the 2011 Tour, shows such exquisite attention to detail as it explores several key subtexts that we cannot fail to be gripped from start to finish.

Julia Hansen’s excellent set consists of a revolving stage that over the course of a 360 degree rotation reveals three separate areas. Although the contents of each of these alters, they generally contain the rooms of Don Pasquale, Ernesto and Norina, and Malatesta spends the Overture climbing through windows, paintings and mirrors as he journeys from one space to the next. The production actually moves the setting back in time to the eighteenth century, but the rooms feel slightly stylised rather than entirely realistic. They all seem fairly Spartan, and in each case a plain black wall rises above the height of the room to emphasise its place within a larger, theatrical narrative. There are also many interesting touches such as the wallpaper pattern in each room similarly appearing on the furniture and doors.

In one of several innovations, a non-singing and non-speaking role of a servant to Don Pasquale (Anna-Marie Sullivan) is introduced. Entirely through silent gestures, she reveals that she dotes on him from the start, proves profoundly put out by his ‘marriage’ and finally, and opportunistically, offers herself as his consolation. Another avenue explored is the relationship between Norina and Malatesta, which is at the very least flirtatious and may well signify something far more sinister. It starts with Malatesta helping to partially undress Norina and jumping in the bath with her, and ends with a glance between the two at the close of ‘La moral di tutto questo’, which suggests that they have unfinished business.

Alongside this lie a host of excellent minor touches. Many prove hilarious, and it seems that Clément thought hard about how to introduce a joke at every point possible without pushing things too far. In his excitement at the prospect of meeting his bride, Don Pasquale appears through the door in Act II and immediately disappears again in a move that proves amusing precisely because no explanation is given for it. Similarly, the Notary (a suitably bewildered James Platt) succeeds in fluffing every one of his entrances, arriving either too early or late, but never on time.

Norina and Ernesto sing ‘Tornami a dir che m’ami’ while having a picnic in a nod to what most of the audience have just done, with their romantic (and suggestive) pouring and stirring of each others’ tea being interrupted by Ernesto burning his hands on the teapot. During the singing of the Act II quartet the soloists step out from their surroundings to be observed by a chorus of eighteenth century theatre-goers. This works because it emphasises to the real audience that they too are suddenly witnessing the thoughts, as opposed to actions, of these characters, and over the course of Act III the chorus is used in ever more imaginative ways.

Musically, the evening is no less accomplished, with Enrique Mazzola achieving a beautifully radiant sound as the London Philharmonic Orchestra sweeps through the score while maintaining crystal clarity. As Norina, Danielle de Niese excels in ‘So anch’io la virtù magica’, applying impeccable phrasing to her sumptuous sound and almost playing out in turn each adjective that she uses to describe herself (‘unpredictable’, ‘quick’ and ‘vivacious’). Enea Scala, replacing an ailing Alek Shrader as Ernesto on opening night, reveals a gloriously strong and expansive tenor instrument that makes ‘Mi fa il destino mendico’ a particular highlight. As Malatesta, Nikolay Borchev’s similarly excellent voice is utilised to emphasise his scheming nature, and his patter singing with Don Pasquale is superbly executed.

In the title role Alessandro Corbelli is comedic perfection. Although the part demands a certain degree of exaggeration, it is striking just what level of understatement he succeeds in bringing to it. Whether he is cradling a rocking horse as he anticipates children, inexpertly brandishing a gun or conversely making no movement at all, he has that rare ability to effortlessly radiate humour. His facial expressions, which can portray childish glee, marital fatigue or lonely despair, cannot help but make us feel for him. It is just a good job that the rest of the cast prove equally engaging, so that we don’t have an ending in which all of our sympathy rests with Don Pasquale. As it is, the Finale proves finely balanced, as we have warmed enough to each of the principals to be rooting for them all, in one way or another at least.