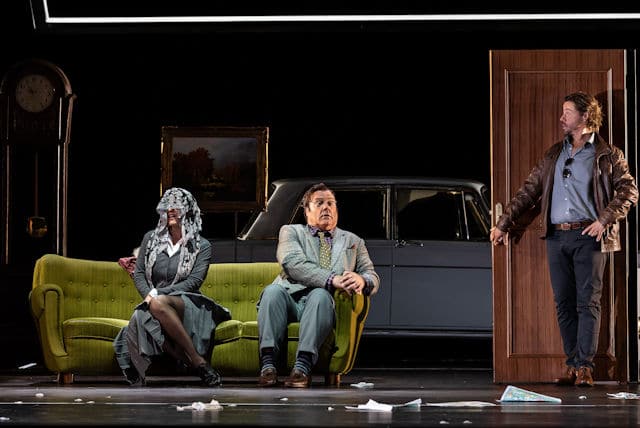 With its minimalist rotating set, topped with a roof outline in fluorescent strip-lights, Damiano Michieletto’s new production of Don Pasquale is a contemporary take on Ruffini and Donizetti’s shamelessly straightforward let’s-fleece-Pantalone opera buffa.

Pasquale himself transforms from Hyacinth Bucket’s Onslow in a butterscotch-tartan dressing-gown to the sort of character often played by John Candy, in mismatched ‘premium-range’ clothes, and with a thinning, dyed Elvis quiff. Malatesta is a sexy urbane charmer in sunglasses and a leather bomber, Norina an assistant for a film company, and Ernesto a bespectacled hoodie-clad geek. The all-important messages arrive by text, the set sports a couple of motor vehicles (the first a battered old Lancia, the second a sleek black limo), much use is made of live film (with greenscreen), there are appearances from Avenue-Q-style puppets, and the arrival of the ‘TV-makeover’ team at the opening of Act III makes for a well-judged comically voguish reference.

In general, the update worked, although there were a few details that niggled: the Freudian appearances of a young Pasquale with his mother seemed like an unnecessary attempt to add a cuteness factor by bringing children on-set, and the techies need to reconsider the wireless link between camera and projection, as the delay between sound and vision was irksome. The characterisations, too, emphasised some of the motivation holes in the plot: Norina’s independent character was incipient in her initial career-woman image, and forced one to question even more what she sees in Ernesto – whose colourlessness was augmented by his nerdy, on-the-verge-of-incel updated persona – and wonder why she doesn’t just split the loot with her brother and take off.

Fans of Donizetti will find nothing to complain about in the musical direction; the orchestra, under Evelino Pidò, delivered Donizetti’s score with careful attention to tempo, dynamic and blend, such that the action and singing were perfectly framed (the trumpet solo in the Prelude to Act II was beautifully played). In an odd sense, the music almost wasn’t there; the action and comedy held the attention, and the score chugged along in a somewhat supporting role, enlivened by occasional noteworthy highlights – a considerable relief for those of us who are not particularly fond of the obvious musical tropes of operas from the bel canto era.

Sir Bryn Terfel’s Don Pasquale was masterful, and he pulled out every expressive stop in the role. The solid, characterful baritone for which he is known was mostly all there, but there was the occasional rusty moment. Markus Werba’s Malatesta matched Terfel well, such that their baritone conversations (‘Son nov’ore‘) were nicely balanced, particularly in the duets; the patter of ‘Cheti, cheti, immantinente‘ was as rapid and impressive as it needed to be. Olga Peretyatko, making a Covent-Garden debut as Norina, gave a flawless performance, her voice sweet and honeyed at the outset (and for the elegantly damped trill in ‘So anch’io la virtù‘), but demonstrating power and command after her matrimonial transition, with a solidity of tone that served her well in the quartets. Ioan Hotea’s tenor voice is full of upper harmonics and rather nasal; it certainly pointed up the whiny character that Michieletto has created for Ernesto (‘Cercherò lontana terra‘ became more of a fit of pique than a tearful farewell). The Notturno duet ‘Tornami a dir che m’ami‘ worked well, but Hotea’s voice was lost in the boisterous quartets.

The portrayal of Pasquale’s servants allows directors considerable scope, and the single maid – obliged to fix coffee, corsets and car-bumpers alike – played with gloriously passive-aggressive silence by Jane Evers, was a comedic treat all by herself.