by Dominic McHugh
published: 26 May 2006 in Opera and Classical Reviews
Tweet 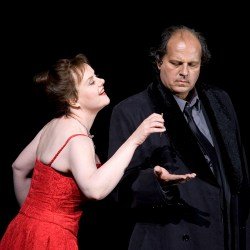 The first two decades of the twentieth century were a remarkable time for the development of opera.

In reaction to the excesses of the Wagnerian and verismo schools of opera, in Germany and Italy respectively, composers started to condense their stage works to create something more immediate and concise.

This has never been clearer than in the first revival of the Royal Opera’s double bill of Bartk’s Duke Bluebeard’s Castle and Schoenberg’s Erwartung.

It’s become quite common to pair the works, which were written only a few years apart, but Willy Decker‘s production (revived by Martin Gregor Ltje) is unusual in drawing such thought-provoking parallels between them.

Bluebeard introduces us to the newly married Duke Bluebeard and Judit. The Duke’s castle is a place of darkness and mystery, and Judit wants to bring light into it by opening the seven locked doors. The two play out a psychological battle as Bluebeard wills his wife not to ask him for the keys, but he gives in little by little until she opens the final door to discover Bluebeard’s three previous wives, still alive and kicking.

Decker sets the opera in a rubble-strewn room, dominated by a huge chandelier that lights up when Judit opens the door to the treasury. To the left of John Macfarlane‘s magnificent set are the seven doors, which open to reveal streams of different coloured lights; for the fifth door, a huge moon appears and dazzles the audience in tandem with the famous orchestral outburst. A giant portal appears at the back of the stage for the seventh door, out of which emerge the wives of the morning, afternoon and evening, each dressed in a similar red dress to the one that Judit is wearing.

It’s all tremendously atmospheric even before you get to the music, which is played and sung with exemplary style. There are only two singing parts, of course, and the casting is therefore crucial if the intensity of the marital relationship is to be conveyed. Albert Dohmen is the embodiment of Bluebeard, a very imposing figure on the stage whose mental agony is astoundingly vivid. What really sticks in the memory, however, is his voice, which is a beautiful, true bass-baritone that reaches to the centre of the low notes and shines lyrically at the top.

His physical engagement with Judit is remarkable: at different points, the two writhe about the stage, stand in confrontation and cannot bear to look at one another. It’s great to have so intelligent a singer-actor paired with so apt a female counterpart: Petra Lang adds yet another impressive role to her Royal Opera repertoire, breathing life into the music and believably standing up to even so immense a Bluebeard as Dohmen. There’s a huge shift of focus in the opera, from Judit’s domination of the opening of the doors to the final, anguished monologue for Bluebeard; both singers give each other space to shine, and the curtain fell on the opening night to a huge cheer.

So could Schoenberg’s 35-minute monodrama Erwartung live up to the hour and a quarter of Bartk’s intense opera? Absolutely. Perhaps the most surprising thing is how beautiful the score sounds conductor Kirill Petrenko found bucketfuls of lyricism in both operas, the palette especially wide in the Schoenberg. The Orchestra of the Royal Opera House has rarely sounded so enthused, the clattering percussion, shining brass and elegant strings combining to create the most enthralling sound world.

In Erwartung, the character of The Woman wanders through a forest at night, looking for her lost lover. In Decker’s conception, Bluebeard’s giant seventh door is reused as The Woman’s point of entrance and departure, and a silent figure of The Man (representing The Woman’s lover) appears on stage.

Is the Woman really Judit come to life to wreak revenge on Bluebeard? The Man is dressed in similar clothes to the Duke, The Woman wears the same dress as Judit and she brandishes the same knives that Bluebeard carried, stabbing The Man, who does not appear to die so is he an apparition? The intense psychological atmosphere of Schoenberg’s score is matched by a suggestive but ultimately ambiguous direction from Decker, and it’s tremendously compelling.

Angela Denoke made her ROH debut as The Woman and it was phenomenal. Her total absorption into the soundworld of the Second Viennese School was harmonized with a natural legato in the voice and an ability to project over a difficult orchestration. She picked her way through the rubble (still left over from the previous opera) as if examining the remains of a life that has been shattered by the vicissitudes of love.

It was nice to see the opera house so full on the opening night, and the number of young people present created a special atmosphere. This could become the hot ticket of the current season these two short but gripping operas make for a very memorable and stimulating night at the opera.