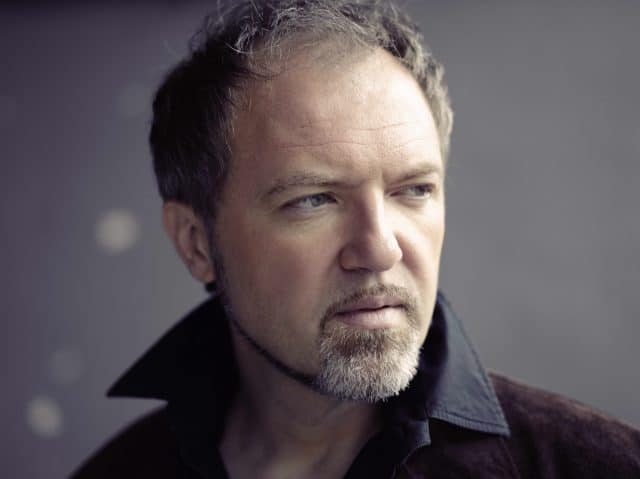 The fact that Ernst Křenek’s opera Jonny spielt auf was banned for representing ‘Weimar decadence’ by the Nazis, has overshadowed the fact that it was tremendously popular when it premiered in 1927. This is important because it means that the composer wrote his Drei Opern of 1928 on the back of a success. This can only have boosted his confidence and, with Jonny spielt auf being about a jazz violinist, encouraged him to do such things as write one of the triptych as a ‘burlesque operetta’.

In David Hermann’s production the three operas – Der Diktator, Schwergewicht oder die Ehre der Nation and Das Geheime Königreich – are linked by seeing one figure appear in all three. This is Italian baritone Davide Damiani who plays the Dictator in the first opera, the King in the last and a non-singing role that does not normally exist in the second. This works because it suggests that as the Dictator flees the scenario at the end of the first opera he seeks escapism in the world of boxing and entertainment in the second before circumstances in the third force him to change completely.

Der Diktator concerns a belligerent ruler and Maria, the wife of an officer who was blinded in a war instigated by the title character. To exact her revenge Maria draws a revolver on the Dictator, but although she plans to kill him, she is won over as he expounds his philosophy of victory of the strongest. She declares she will join him, but his jealous wife Charlotte grabs the now discarded revolver and fires at him, only to kill Maria instead.

In Hermann’s simple yet effective staging, the extent to which Maria is determined to kill the Dictator, and by extension the sheer degree to which she is drawn in by him, is illustrated through physical devices. Maria actually fires at the Dictator twice but, although red blood stains his front, he proves totally impervious to the bullets. It is as if his charm is so strong that even these attacks are useless in the face of it. Damiani is superb as the Dictator, using his strong and slightly mysterious baritone to convey the character’s charisma, while Sara Jakubiak as Maria is possessed of an extremely alluring soprano.

Knowing that the evening consists of three operas it is easy at the start to believe we are going to experience something like Il trittico, especially since Der Diktator sounds positively Puccini-esque. The first two operas, however, only last an hour in total, and the second of these exists in a totally different sound world. With there being no gap between Der Diktator and Schwergewicht oder die Ehre der Nation the contrast in musical styles feels very stark as the latter alludes to jazz, particularly in its use of percussion and banjo. The story concerns a heavyweight boxer, Adam Ochsenschwanz, who discovers his wife Evelyne is having an affair with her long-term dance partner Gaston. After a series of shenanigans, as each character tries to gain the upper hand, Ochsenschwanz normally ends up handcuffed to his new training device as it whizzes around.

In Hermann’s take, however, the entire opera is presented as a show in front of an audience in a seedy establishment, which is in keeping with the notion that the piece is a ‘burlesque operetta’. The Dictator from the previous opera is seen among the spectators (with Charlotte), suggesting that he has fled his kingdom following Maria’s death and is now seeking solace in this type of entertainment. He is not a character in the original Schwergewicht, and only has a few spoken lines here. The opera, however, is made to be about him as much as anyone else as he becomes sucked into the scenario to such an extent that he is the one left spinning in the training device at the end. The standout performance comes from Simon Bailey whose bass-baritone is strong, assertive and perfect for the role of Ochsenschwanz, while Barbara Zechmeister, Michael Porter and Nina Tarandek provide fine support as Evelyne, Gaston and the student Anna Maria respectively.

Das Geheime Königreich lasts as long as the other two operas put together and, in a secret kingdom, sees a world-weary King’s position look increasingly tenuous. His Queen and a Rebel argue about power and then flee to a magical wood. Then when the palace is stormed by the people the King does the same after swapping clothes with his Fool. In the wood the Queen and Rebel find themselves sexually drawn to each other, whereupon the Queen is turned into a tree. The disconsolate King then tries to hang himself from its branches but then hears the voice of his wife, which instead sends him to sleep.

Das Geheime Königreich is staged very effectively with Jo Schramm’s set revealing a dilapidated and war-torn modern palace that exists on two levels and highlights, quite literally, a ‘bunker mentality’. The scene in the wood, however, could not be more different as it emphasises the stark contrast between corrupt society and virtuous nature. It exists as a strip of foliage with tree stumps that lies halfway up the stage. Overhanging curved mirrors then run the length of it and multiply out the light and various shades of green.

Damiani is once again excellent as the King, and, with him appearing in all three operas, the story told by Hermann might be of a belligerent man who tries to escape his life in a variety of ways before finally finding peace in nature. Ambur Braid is a revelation as the Queen, revealing the type of coloratura that also makes her Queen of the Night (seen at English National Opera in 2016) such a success. Lothar Zagrosek’s conducting is impressive as he remains highly sensitive to the needs of the performers, so that the orchestra and singers always feel as if they are really working as one.

Drei Opern is performed in German with German subtitles. For details of all events in its 2016/17 and 2017/18 seasons visit the Oper Frankfurt website.