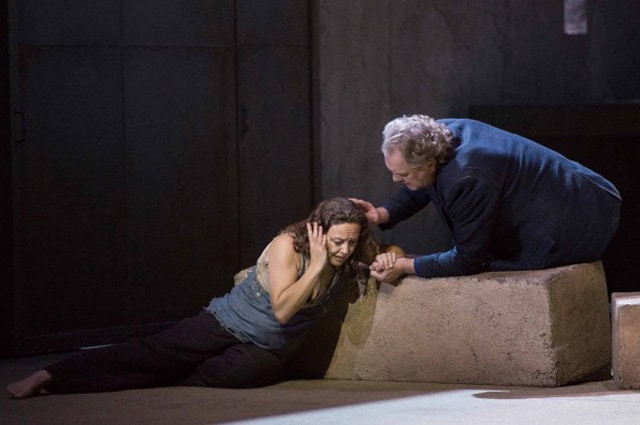 Best known for his centenary Ring at Bayreuth in 1976, and the first complete Lulu in Paris three years later, French director Patrice Chéreau enjoyed something of an Indian summer with acclaimed stagings of Janacek’s From the House of the Dead (Aix, Amsterdam, New York and Berlin) and Tristan und Isolde (Milan), in 2007.

Six years later he returned to Aix to tackle Strauss’ finest opera, Elektra, but sadly died from lung cancer in October that year. Now with a largely unchanged cast since its first incarnation and in the capable hands of his assistant Peter McClintock, his widely-travelled, and in many quarters, highly-praised staging arrived at the fourth of its co-producing houses on Sunday at the Schiller Theater in Berlin, currently home to the Berlin Staatsoper.

Chéreau, aided and abetted by his lifelong collaborator, set designer Richard Peduzzi gives us a cool, intellectual take on Strauss’ 110-minute opera. It’s not hard to see why they wanted to ditch the clichés that inhabit most stagings; moments of schlock-horror, Grand Guignol, and Klytemnestra as a raddled old hag, but in doing so they rob the work of much of its visceral excitement. Strauss knew exactly what he was doing by beginning the opera with the shattering Agamemnon-theme, but on this occasion had the rug pulled from underneath him as we were subjected to a dumb-show before the orchestra began, as one of the maids laboriously swept some steps.

At other times scenes blurred into one another, characters appeared when they weren’t supposed to, and whilst there was much to admire in the overall direction of the singers, the cool aesthetic somehow dampened the hysteria that is so prevalent in the score. Just when the temperature started to soar in the final scene as Elektra began her frenzied dance, it dropped when she sat down, and remained motionless in the same position until the curtain fell.

Hearing this miraculous score in the relative intimacy of a theatre that seats just under 1200, had its benefits. Much of Strauss’ intricate and daring scoring for the woodwinds came across with startling clarity, no more so than in the eerie central confrontation between Elektra and her mother, yet there were times when conductor Daniel Barenboim, seemed intent on keeping a lid on things. Rarely did he let the orchestra of the leash, and there were a couple of slips in stage and pit coordination, but despite this, the playing was superb from start to finish, with all sections of the Berlin Staatskapelle on blistering form.

Likewise the cast was about as good as you could expect these days, although I felt that Waltraud Meier was miscast as Klytemnestra. She looked fabulously regal, and was a handsome stage presence as always but she lacks the requisite chest voice for the part. Michael Volle was a sonorous Orest, singing with firm, glorious tone throughout, whilst Adrianne Pieczonka was a full-throated dramatic presence as Chrysothemis. Two of the stalwarts from Chéreau’s Ring, Donald McIntrye (Wotan) and Franz Mazura (Gunther) appeared in cameo roles, obviously cast from a nostalgic point of view given their advancing years – 82 and 92 respectively! It was also good to see Cheryl Studer back on stage as a domineering Overseer.

Not surprisingly the sensational German soprano Evelyn Herlitzius dominated the proceedings as an incendiary Elektra. Slight of frame, yet refulgent of voice, she is a force of nature. Not only does she actually sing the role more beautifully than I’ve ever heard before, she is also a natural singing-actress who uses her whole being to convey Elektra’s misery, anguish and horror. She gave the performance of a lifetime, and was rightly awarded a thunderous, standing ovation at the close. The fact that Covent Garden continues to ignore her is one of the mysteries of the operatic age – her continued neglect there is nothing short of a scandal.