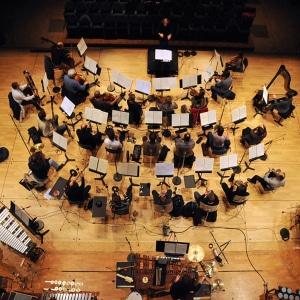 This concert by soloists of the Ensemble intercontemporain featured works of varying quality and approachability by three composers. Luigi Dallapiccola’s Due Studi (1946-7) for violin and piano offered the nearest thing that there was ever going to be in the programme to a beguiling point of entry for the listener. The initial Sarabande made a subtle nod to Bach with the clarity of the violin line that was projected with confidence by Hae-Sun Kang, against which pianist Hidéki Nagano created a countering atmosphere of tone with discretion. The subsequent Fanfara e fuga erupted from the two instruments by contrast, the piano part verging on the ascerbic, whilst the violin pursued a more jagged line.

Bruno Mantovani, director of the Paris Conservatoire, is no stranger to gripping the attention of his listeners from the very start of his compositions. This world premiere performance of Carnaval, scored for clarinet, cello and piano, proved no exception with its initial prolonged wailing clarinet statement projecting uncomfortably strongly against the grim grumblings of the sul-ponticello scraping produced by cellist Éric-Maria Couturier. Thereafter the pair often shadowed or commented on each other’s parts throughout the 35 minutes of the piece, which at times took tangents to little effect or interest before suddenly rediscovering a sense of purpose. Moods shimmered forth from the piano, sometimes beguiling, sometimes disturbing in their articulation, passing en-route the shadow of a Wagnerian utterance stripped bare of its weight and grandeur, maybe the merest snatch of tune for the clarinet which was not dwelt upon and more than once a chord that Schumann might have discarded was left exposed on the keyboard. Matters inevitably became more trenchant, involved and self-absorbed heading towards a maelstrom of turbulence that with some predictability petered out to some thinly veneered piano chords. Perhaps the closing diminuendo proved most pleasing to the ear, and in turn helped secure a strong reception for this over-long essay of successive techniques, even though one was left in no doubt as to the skill of the musicians in their performance.

The emotional searching and angst within Schoenberg’s Pierrot lunaire almost came as light relief after the interval. That stated, the performance with soprano Salomé Haller proved rather more effective in plumbing the depths within the poems as the work progressed. Haller initially found herself almost literally sidelined by the ensemble, perched atop her high bar stool to stage right, with score and music stand acting as further anchors. By slow progression, she fashioned her own intimate stage by rotating the bar stool, and with impeccable diction fashioned a range of character from Schoenberg’s famous speech-song vocal line. Distain was found in Der kranke Mond, a wonderful playfulness marked out Der Dandy, a deliberateness was brought to her acting – vocal and physical – in Madonna, whereas Rote Messe, Galgenlied and Enthauptung seared with the heady mixture vitriol and near depravity that Schoenberg captured so assuredly in 1912. The Ensemble intercontemporain soloist were every bit as involved and involving as Haller in their ability to draw the audience into one of the twentieth century’s towering musical monuments.