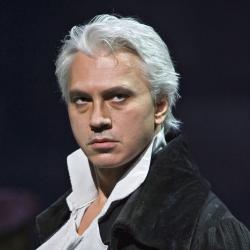 Snow, rain, ice skaters, a lake – the Royal Opera’s new production of Tchaikovsky’s most familiar and enduring opera has it all.

And in the two lead male roles, the company has secured the services of two of the world’s greatest singers.

So why did the evening not prove quite the success that one would have assumed on paper to be guaranteed?

In principal, the idea of having a lake in the first scene that later freezes over to allow ice skating was attractive. But in practice the water gets in the way and the skating is hardly as entertaining as Torville and Dean (or even Disney on Ice). I could not but guffaw when Tatyana’s bedroom was dragged offstage through the water by a group of men in white and red cassocks. Nor was it plain why the opening tableau was dominated by a backdrop of a male nude, which became transparent to allow us to see Tatyana and Olga singing in the distance.

Pimlott’s direction itself should not be totally condemned, however. He gets every single member of the cast into character, moving naturalistically on the whole, and with an awareness of the complex (and often overlooked) psychological outline of the work.

Tchaikovsky weaves the entire drama around musical themes associated with Tatyana, who is an innocent but passionate young girl in the first scene. She falls in love with Onegin, who scorns her affection. But when he meets her years later, sophisticated and married to a prince, he rues his actions, which also include killing his best friend Lensky in a whimsical duel.

The saving grace of the evening is the musical performance which, although not first rate, was never less than competent and managed occasionally to be outstanding. The latter category certainly describes the riveting singing and acting of the young Mexican tenor Rolando Villazn as Lensky. Consistently excellent from his first entrance, Villazn was captivating as the impetuous young lover.

What surprised me was the way that his voice has matured and become fuller and richer he seems to have shaded it specially for the role and his projection was superb. His love duet with Olga in the first scene was ardently done; his voice rode the large forces of the party scene in Act II with ease, conveying his anger at Onegin’s flirting with Olga; and his aria just before his death could scarce have carried more poignancy. I guess he’ll rarely sing the role in the future, so it’s more than worth seeing the opera in its current run for Villazn alone.

As Onegin, the popular Russian baritone Dmitri Hvorostovsky returned to a role he first sang at the House in 1993. Though it took him a while to warm up, his performance was mostly impressive. In particular, his golden tone returned for the second and third acts, with a spellbindingly sung final scene.

Somehow, I can never quite warm to Amanda Roocroft in big roles such as Tatyana. Yes, she has the power to project her voice up to the rafters, and always throws herself into the part with energy. But for one thing, she’s far too old for the role, she doesn’t quite hold the audience’s attention in extended passages such as the (here laborious) Letter Scene, and in general, she lacks a distinctive quality to make the interpretation memorable. One dreams (perhaps hopelessly) of someone like Angela Gheorghiu bringing glamour and pathos to the role in a future revival, qualities lacking in Roocroft.

The smaller roles ranged from the decrepit Triquet of Ryland Davies to the luxurious casting of Eric Halfvarson as Prince Gremin his big aria was one of the high points of the evening, and contrary to the reports of Thursday’s first night performance, he easily reached the low notes at the end. Yvonne Howard was the best Larina I’ve heard. Almost stealing the show not for the first time this season was Young Artist Robert Gleadow as Zaretsky. He easily held his own between Villazn and Hvorostovsky, two great artists in their prime, in the duel scene: that says it all about his massive dramatic and vocal talent.

The chorus was in the best form of the season so far, revelling in Tchaikovsky’s thrilling ensembles, whilst the orchestra seemed less than inspired by Philippe Jordan‘s conducting. He took some very pedantic tempi, sometimes failing to take control at all, whilst bringing Tatyana’s Letter Scene to a practical standstill with his claustrophobic slow tempo in the middle section.

It’s a great opera, and there are many reasons for hearing this performance. But Pimlott’s production is not the success it promised to be.