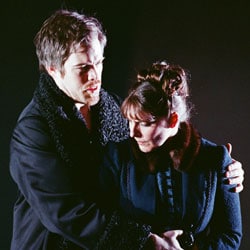 Director Deborah Warner has described the challenge of staging Eugene Onegin as legendary but she has risen to it with extraordinary aplomb, and her entirely unpretentious new production gels perfectly with Tchaikovsky’s creation.

Visually there is always enough to spark the imagination, without the stage ever feeling cluttered or crowded, allowing the music to tell its powerful story. Superb set design ensures that visual contrast remains paramount without the production ever feeling disjointed; a pair of distorted mirrors at the sides of the stage provides continuity as well as giving the impression of a larger space.

Madam Larina’s house, displayed from several angles, helps to build up the idea of the characters lives: the room inside the rustic farmhouse gates, bustling with servants and visitors, heightens the impression of the family’s everyday existence, and the lavish ballroom in Act II augments the already electric atmosphere created by the cast in the ballroom scene. A particularly exquisite effect occurs in the form of a perfectly timed sunrise in Act I, which breaks the fourth wall by bathing the audience in a soft golden light, drawing us in to Tatyana’s naive hope for the new day.

One of the most striking sets appears in the duel scene; a bare, monochrome snowy Siberian landscape, dotted with trees struggling to survive the harsh winter, provides the perfect desolate backdrop for Lensky’s heartfelt aria. The palace set takes the simple but decadent form of marble pillars and candelabras, conveying a sense of classic minimalism, both fashionable and timeless. Beautiful costumes, ranging from the rustic clothing of Act I to the exquisite ball gowns of Act III, complement the set and plot perfectly. Electric performances from a team of accomplished dancers at various well-timed points throughout the opera provide a feast for the eyes as well as the ears.

In the title role, the Norwegian baritone Audun Iversen betrayed none of his Scandinavian roots; his English accent was spot-on, and his diction crystal clear throughout the performance. Displaying a round, rich lyric baritone, he performed the role of Onegin with energy and conviction, although his sound was on the small side for a theatre this size, forcing him to occasionally push the voice.

Amanda Echalaz as Tatyana squeezed every ounce of emotion from the role and gave an entirely captivating performance, commanding he stage in a thrilling, compelling and utterly believable rendition of her letter scene .The chemistry between her and Onegin became apparent whenever the two appeared on stage simultaneously. Echalaz’s vibrant, sparkling soprano negotiated Tchaikovsky’s beautiful lines with perfect ease, incorporating a wide range of perfectly placed dynamics, from her punchy interplay with her nurse to her moving love scenes with Onegin.

Toby Spence as Vladimir Lensky gave one of the most compelling performances of the evening, portraying all the sides of his character throughout the first two acts, with his beautifully expressive, clear, bright and focused sound lending itself perfectly to Tchaikovsky’s indulgent melodic lines. His serenade to Olga in Act I was extremely touching; however, the real highlight was his heart-rending performance of Lensky’s solemnly meditative aria against that wonderfully desolate backdrop. His acute awareness of his impending death was clear from the beginning of the scene, and intensified throughout the aria, climaxing in a brilliantly acted death scene, devoid of all hope and optimism.

In the lighter roles, ENO Young Singer Claudia Huckle gave a charming performance as the nave and flirtatious Olga, although she also suffered from a tendency to push a smaller voice than that of her peers on stage. Catherine Wyn-Rogers fruity mezzo-soprano, combined with a bustling presence on stage, made her perfectly suited to the role of Nurse Filipievna, and her voice was also extremely well matched to the rich and spirited mezzo of Diana Montague, who performed the small role of Madame Larina with the perfect balance of sensitivity and nostalgia.

Adrian Thompson seemed completely at ease in his hilarious portrayal of Monsieur Triquet, complete with flamboyant French accent. Managing to switch deftly between Triquet’s beautiful lyric pianissimo and his comic forte passages, he gave a committed performance totally deserving of the rapt attention of the surrounding chorus ladies. Also excellent was bass Brindley Sherratt, whose ever-reliable powerful lower range was utilised to full effect in his role as the instantly likeable Prince Gremin, and he also delivered his touching soliloquy about finding love in old age with exquisite tenderness.

The ENO chorus, augmented for this production, performed with great energy and excitement, with some particularly excellent singing coming from the ladies in their folk-song in Act I, where they produced a dazzlingly sensuous blend. Under the expert hands of conductor Edward Gardner, the superb ENO orchestra matched the musical excellence of the cast and chorus and made the most of their instrumental interludes.

This production has much to recommend it; the pacing is excellent, the characters well-developed and believable, the set exquisite and the singing sublime. Nothing feels laboured or forced; everything is smooth and compelling. Warner has achieved everything she set out to achieve with this production, and more.