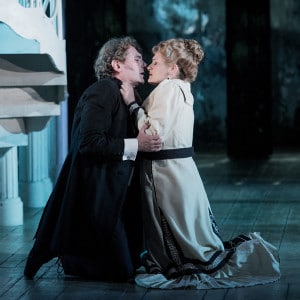 Eugene Onegin is such a psychologically driven affair that many directors feel compelled to explore the minds of the protagonists in complex and imaginative ways. The size of Grange Park’s opera house, however, would preclude it from such actions as splitting the characters of Onegin and Tatyana between a singer and dancer as Kasper Holten did for the Royal Opera in 2013. Instead, Stephen Medcalf has let the principals tell their story in a straightforward manner, and this proves as good a method as any for helping us to engage with their emotions. There is, after all, no better way to feel the inner torment of Onegin and Lensky at the duel than to witness them at close proximity staring each other in the face and embracing before going on to do the unthinkable.

Francis O’Connor’s set almost feels like a metaphor for The Grange itself, as it exists on two levels with a beautiful wrought iron colonnade vying with backdrops depicting orchards. Considering that the opera house was originally a conservatory, standing then as now within nature, this feels highly appropriate, as does the evocation of the Gremin Palace in Act III. Here, the stage is opened out further with the addition of a spiral staircase and candle lit mirrors, echoing the fact that at another point in its history this place was actually a ballroom.

To suggest that the staging is simple, however, does not mean it is lacklustre, and much of the drama is vested in some telling details. The two levels are exploited well, and frequently used to separate the individual from the mass. At different points during the Larin ball Onegin and Tatyana stand alone, looking down on everyone as detached observers. When the pair dance he walks away from her to overhear the rumours abounding about them as she continues to swirl alone as if in a dream. Although this is not intended to be realistic because the point is that Onegin is stepping out of his own body, it does suggest that Tatyana is so caught up in him that she does not even notice what is really happening with the person receiving her affections.

The sense of dynamism also exceeds the strict level of movement that there is on stage. The Larin ball begins with everyone in a frozen pose, which highlights the wealth of activity to be found at this heady event. It then works through the scene to show how a series of ‘petty’ occurrences escalate out of control to a point where a duel is declared, and no-one feels able to back down. Choreographed by Lynne Hockney, the Waltz is executed by a handful of professional dancers, revealing how eight people in this compact venue can have just as much impact as a far larger troupe in a grander place. The whole company, however, participates in the Cotillion and other dances, which works because couples becoming annoyed as they make mistakes are here written into the staging.

Act III’s Polonaise is slightly less successful because the division between drama and dance is too great. With the main stage showing how society shuns Onegin, the dancing is confined to the smaller upper level, and while it is well executed it lacks the drive to overwhelm us. Nevertheless, as we watch Tatyana elegantly descend the staircase accompanied by graceful fan waving, and the crowd laughing at Onegin through crazed slow motion gestures, it is clear that this production hits the mark many more times than it misses it.

The most consistently strong performance comes from Susan Gritton as Tatyana, whose soprano is sweet and measured, yet always sufficiently strong. One senses that there is a degree of calculation, though hardly choice, to this Tatyana’s infatuation in that she has genuinely weighed up the risk of embarrassment if she sends the letter against the futility of living at all if she does not. Gritton heads a superb female quartet with Rebecca Afonwy-Jones’ Olga revealing an intriguing tone and excellent enunciation, and Anne-Marie Owens and Rebecca de Pont Davies proving class acts as Madam Larina and Filipyevna respectively.

Both Jung Soo Yun as Lensky and Brett Polegato as Onegin generate the most beautiful sounds when they can tap into the best areas of their voices, but they struggle more in the less lyrical passages when they need to maintain power. Nevertheless, there remains much to enjoy in both of their performances and Jung Soon Yun’s rendition of ‘Kuda, kuda vï udalilis’ is the undoubted highlight of the evening. With no audience member being that far from him as he simply sits with his letter and thoughts, there is nothing to distract from this most poignant of moments.

At least until the duel, Polegato comes across as less thoroughly disturbed as some Onegins, and this proves to be all to the good. As we watch him being so unsure as to what he really wants, lurching to extremes in his ‘jesting’ and then appreciating that he has perhaps gone too far, there is a sense in which we all know a difficult person who can behave just as this Onegin does.

Alan Ewing is a rich voiced Prince Gremin, Jeffrey Lloyd-Roberts proves good value as Monsieur Triquet while Lukasz Karauda’s splendid baritone really stands out in the small role of Zaretsky. Conducting the Bournemouth Symphony Orchestra, Gianluca Marcianò brings clarity and a pleasing variety of hues to the score, while the excellent chorus feels very much in the right zone for tackling this masterpiece of the Russian operatic repertoire.