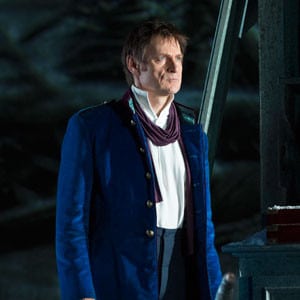 This new year the Royal Opera House is staging both Tchaikovsky’s Eugene Onegin and the ballet Onegin, which utilises the composer’s various concertos, waltzes and mazurkas. Although they follow the same plot, the pieces are quite different in tone, and the conclusion to be drawn from watching Kasper Holten’s new interpretation of the opera may be that dance was provided with its own separate forum for a reason.

Conceptually, the production is problematic, if not always unsuccessful. Tatyana and Onegin frequently share the stage with dance doubles who are supposed to constitute younger versions of themselves, as if the whole story is being told as a flashback. The difficulty is not so much that the dancing constitutes a visual distraction in itself, but that the doubles drain the emotions out of the main protagonists, and poison the chemistry that should emerge between them.

Disconcertingly, when Kathleen Wilkinson’s Filipyevna interacts with Krassimira Stoyanova’s Tatyana and Vigdis Hentze Olsen’s Young Tatyana, we see two people adopting operatic poses and gestures, and one balletic ones. With Wilkinson flitting between addressing Stoyanova and Hentze Olsen, and Stoyanova dividing her time between singing to Filipyevna and ‘herself’, this befuddles rather than illuminates the emotional relationship between the girl and her nurse. Things fare slightly better during the ‘letter aria’ when Stoyanova is alone on stage with her double, but when the suddenly impassioned music is met with equally frenzied dancing it actually drains the moment of its psychological intensity, simply by labouring a point that the music alone would make.

The stage contains a row of columns that create an interior space in front of them and a series of more open areas behind. When, for example, fields stream out behind Madame Larina’s house, this could symbolise the contrast between the trappings of Tatyana’s elevated lifestyle and the freedom inherent in nature and youth. The columns, however, restrict movement by dividing the stage, and too often the (excellent) chorus sing in uniform lines, or otherwise standing or sitting still.

Musically, however, the evening is far stronger. Robin Ticciati conducts with sensitivity and balance, creating a sumptuous, yet spiritual sound. In the same way that the opera emphasises the fleetingness of youth and intensity of love in the moment, the Orchestra of the Royal Opera House generates the dual feelings of power and evanescence. Rhythmically precise throughout, the orchestra’s strong mastery of alterations in tempi and volume prove far better at directing the pace of the proceedings appropriately than the staging ever does.

As Onegin, Simon Keenlyside has a rich, creamy voice that is equally effective in the lower and upper registers, and reveals great depth of tone. If his gestures initially appear too large and bold, it soon becomes clear that he knows how to generate presence and create a deeply troubled persona. Krassimira Stoyanova has a rich and beautifully hewn voice that seems perfectly suited to expressing need, longing and vulnerability. Notwithstanding the fact that her double draws some of the emotional power away from her own performance, she does prove an expressive and engaging actor.

As Olga, Elena Maximova, making a tremendous Royal Opera debut, is possessed of a burnished mezzo-soprano instrument, while Pavol Breslik excels in Lensky’s aria ‘Kuda, kuda vï udalilis’. Diana Montague and Kathleen Wilkinson are in fine form as Madame Larina and Filipyevna, while as Prince Gremin and Zaretsky respectively, Peter Rose and Jihoon Kim, a Jette Parker Young Artist, leave impressions that far exceed the size of their parts. While the effectiveness of their roles in this context may be disputed, what cannot be is the standard of the performances given by Vigdis Hentze Olsen and Thom Rackett as the Young (dancing) Tatyana and Onegin.

The staging in the second half is more successful, since having two Onegins during the duel helps reveal both sides to the character: one figure embraces Lensky while the other chooses his weapon and dispatches his friend. By placing the evening’s sole interval before the duel, that encounter is immediately followed by the Polonaise, which enables it to be staged highly innovatively. With Lensky’s body remaining on stage throughout, Onegin begins the piece by momentarily raising a pistol to his own head and swigging from a bottle, before seven dancers swirl around him and reveal his own state of mind and difficulty with relationships. This said, having Prince Gremin on stage to witness Tatyana and Onegin’s final confrontation introduces as many problems as it generates new insights, and the same might be said of the production as a whole, although it is worth experiencing for the strong musical performances.

The production will also be broadcast on BBC Radio 3 in May 2013 (date unspecified at the time of writing).