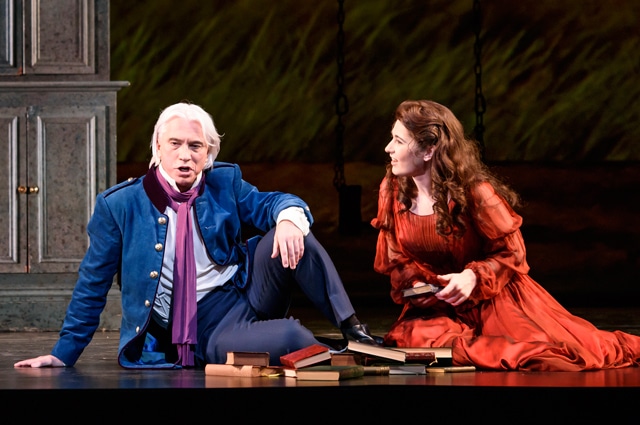 Some productions prove magnificent on their first outing, and then never quite repeat the magic in subsequent revivals. Others do not enjoy such great success initially, and yet come into their own with some fine-tuning. Kasper Holten’s 2013 production of Eugene Onegin, the first piece he ever directed for the Royal Opera, definitely falls into the latter category. With an almost completely new cast, and a significant rethink on how to delineate the production’s underlying concept, this first revival transforms something that first time around felt so problematic.

Holten’s idea is to split the parts of Tatyana and Onegin between a singer and dancer, with the singers being the age of the pair when they are reunited in Act III, and the dancers being the teenagers at the time of their first meeting. In this way, Acts I and II are told in flashback as Tatyana and Onegin look back on their younger selves, wishing they could intervene to avert sorrow and disaster. The difficulty before was that the dancers drained the emotions out of the main protagonists, poisoning the chemistry that should have emerged between them. For example, when Kathleen Wilkinson’s Filipyevna interacted with Krassimira Stoyanova’s singing Tatyana and Vigdis Hentze Olsen’s dancing Tatyana, she flitted between addressing Stoyanova and Hentze Olsen, which broke the strong bond that should have been created between girl and nurse.

This time around, with the production having now appeared at several other houses, Holten has taken more time to consider how his ideas need to be conveyed. For example, the clarity brought by making the young Tatyana the sole focal point for both Filipyevna and her older self helps us to feel the strength of Tatyana’s and (on other occasions) Onegin’s regret as they look back on their past. It also sees moments that do not make sense from a logical viewpoint (they were never intended to do so) work because we grasp the power of the gesture for ourselves. For example, in Act I the older Onegin tells the older Tatyana that their love will never be but the implication is that the younger Tatyana only learns of the rejection when the older one hands the letter back to her.

The dancing has also become less dominant. Before during ‘Puskai pogibnu ya’ the suddenly impassioned music was met with equally frenzied dancing, but this drained the moment of its psychological intensity by labouring a point that the music alone was fit to make. This movement has now been eliminated, but in other ways the dancers (Emily Ranford and Tom Shale-Coates) have been given a greater role. The evening’s sole interval is placed before the duel, meaning that the pivotal encounter is immediately followed by the Polonaise, which is staged highly innovatively. With Lensky’s body remaining on stage throughout, Onegin begins the piece by raising a pistol to his own head and swigging from a bottle, before seven dancers swirl around him and reveal his own state of mind and difficulty with relationships. In 2013 the singing Onegin took centre-stage in the sequence, but now the dancer does. This works because it enables the older Onegin to look back on the facile, drunken, debauched life that he led following the death of his friend, and in the process brings us up to the time of Act III. It is a shame, however, that the younger Onegin does not actually dance more in the Polonaise as the routine that was originally choreographed to accommodate an opera singer is only slightly modified. 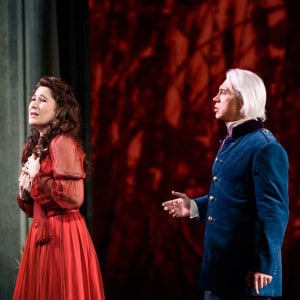 The final scene is also successful because, as last time, it introduces the dancers laughing, joking and walking arm in arm. This shows how Onegin and Tatyana have looked back on everything that went wrong, and now visualise how it should have worked out for them. There is a slight problem with Gremin appearing in the final scene because it suggests that Tatyana’s final rejection of Onegin is partly inspired by her fear of what he will do to her if she leaves him, which is surely not the reason why she turns her back on Onegin. Still, Tatyana has started to tell Onegin that she will never be his before she realises that Gremin is present. There is also a keen sense of narrative thrust as the disasters literally pile up before us. A cupboard door that is broken off during Onegin and Lensky’s confrontation at the Larin ball remains on stage for the remainder of the opera, as does Lensky’s body following the duel.

As before, the stage contains a row of columns that create an interior space in front of them and a series of more open areas behind. Sometimes the columns can restrict movement by dividing the stage, but they also help to give the chorus a special identity at the Larin and St Petersburg balls. As the people crowd around the central action, they create a claustrophobic atmosphere that helps the main protagonists to feel that everyone is either judging or laughing at them. At the same time, however, it becomes possible to view the group as the voice of reason because had it been listened to, the duel would never have taken place.

The evening is also aided by its outstanding musical credentials. Semyon Bychkov’s conducting is superb, while the cast is of an immensely high calibre. Nicole Car, who made quite an impact as Micaëla in Carmen on her ROH debut in October, is a superb Tatyana, producing a sumptuous sound that is precisely rendered, especially in the upper register. Vocally, Dmitri Hvorostovsky delivers everything we would expect from the star baritone, while his acting is convincing as he gazes uncomfortably on all of the mistakes Onegin has made. While Simon Keenlyside in the original production made Onegin seem thoroughly disturbed, Hvorostovsky presents a more understated portrayal of one who finds human relationships so difficult. One senses that this Onegin really wishes to be kind in the way that he tells Tatyana that he is rejecting her, but simply lacks the skills to show it.  Similarly, his behaviour at the Larin ball may well represent his desire to mask the guilt he is feeling by convincing himself that he is an all-powerful figure who can behave as he pleases.

Michael Fabiano, on his Royal Opera House debut, is an excellent Lensky with an aesthetically pleasing voice and a highly effective approach to dynamic variation. His sound in ‘Kuda, kuda vï udalilis’ has an almost dream-like quality, entirely befitting the act of looking back on happier, more carefree days. Oksana Volkova also makes her ROH debut as Olga, and her mezzo-soprano proves rich and full. Diana Montague and Catherine Wyn-Rogers are luxury casting as Madame Larina and Filipyevna respectively, as is Ferruccio Furlanetto as Prince Gremin. It may be a small part but Furlanetto’s impact is great as he positively rolls those bass notes in ‘Lyubvi fse vozrastï pokornï’.