Tchaikovsky’s opera sees West Green House’s season on the lake end as strongly as it began. 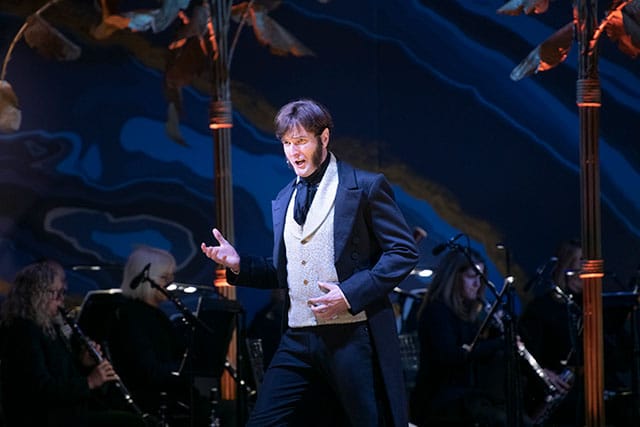 Although we are not inclined to see Eugene Onegin as representing a dichotomy between nature and society in quite the same way as Der Ring des Nibelungen, there is still that element to the work. The former is represented by the soil, countryside and good honest peasants and the latter by manmade constructs such as balls, where emotions can run high, and duels, which formalise the killing of people.

It is this element that John Ramster’s new production for West Green House Opera emphasises as the stage is a physical creation but, being built out from an island in the middle of a lake, is surrounded by water, trees and nature. As such, the stage itself seems like a claustrophobic, repressive place, and a pressure cooker in which temperatures can boil over, while what lies around feels natural and wholesome. This contrast is brought into focus by us actually seeing people enter and exit the ‘arena of action’ by walking over the real wooden bridge that leads from the gardens to the island. We see, for example, the peasants arriving to celebrate the harvest, Lensky leading Onegin across it when they visit for the first time, and Monsieur Triquet (a tremendous Jeffrey Lloyd-Roberts) heading up the revellers for the Larin ball.

Or course, society and nature are not divided neatly between everything that is within, or without, the performance area, as golden trees that represent an orchard fill the stage, while the backdrop to Richard Studer’s set feels quite abstract. It sees a marbled effect of light blue and gold on a dark blue background, and would seem to have been deliberately designed to create shimmering effects as it is reflected in the water below. Some of the gold streaks also cross the doorframes that act as entrances to the stage, which in itself might suggest something about the disrupting of order.

“…the stage itself seems like a claustrophobic, repressive place, and a pressure cooker in which temperatures can boil over…”

Props are kept to a minimum and those there are such as benches, chairs, beds and writing tables comprise transparent Perspex with simple steel frames. They support the drama in an unobtrusive manner, as if the production is deliberately saying that this opera is about the people, not the objects. Though the chorus is small, it fills the scenes of mass activity extremely well, and there is impressive dancing after the peasants enter in Act I and at both balls. Two trained dancers (an excellent Charlie Mellor and Louise Rigby) are employed to lead the movement, but the chorus members are also involved, and the image of the dancing, courtesy of choreographer Charlie Morgan, at the St Petersburg ball reflected in the lake after dark is immensely beautiful. It is also good to see how each chorus member reveals different reactions so that, as Monsieur Triquet sings, some guests imitate his actions enthusiastically and accurately, while the attempts of others are confused and half-hearted. 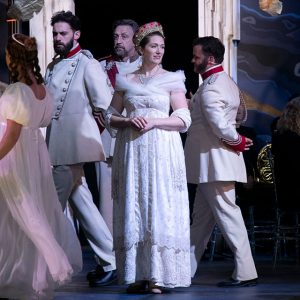 One of the production’s strengths is to play out dreams, past events and subtexts through the physical appearance of characters in scenes. When Filippyevna explains to Tatyana why she got married, her younger self appears and at one point clutches her stomach as if to suggest that she was pregnant. After Tatyana has sent her letter to Onegin he enters her bedroom, revealing what Tatyana would love to happen and providing a stark contrast with what actually does. As Lensky sings ‘Kuda, kuda vï udalilis’ Olga appears already in a mourning veil, and after he is shot (here remaining standing with his arms outstretched to resemble a crucifixion) Gremin is seen meeting Tatyana for the first time.

Nicholas Lester is an especially intriguing Onegin, because so often his behaviour could as easily be that of a kind, caring person as of an aloof, disturbed and detached individual. When he meets Tatyana after she has sent him her letter we might see him as behaving impeccably and with a sympathetic smile as he lets her down, except that even as his actions seem entirely appropriate it is possible to detect a certain condescending air about him. We are then inclined to view his character as even more ambiguous when the pair walk off arm in arm at the end of the encounter.

Angharad Lyddon, Sarah Pring and Rhonda Browne are all class acts as Olga, Madame Larina and Filippyevna respectively, while three arias stand out in particular. The first is the ‘letter aria’, in which Jenny Stafford, by virtue of the strength of her soprano and acting, draws us deeper and deeper into Tatyana’s predicament, and the second is Gremin’s, in which Julian Close reveals a notably secure and deeply hued bass. The third is ‘Kuda, kuda vï udalilis’, where Thomas Elwin makes Lensky’s cry of anguish as powerful as ever by applying great dynamic variation to the aria so that some lines are delivered extremely quietly. The West Green House Orchestra, which plays Derek Clark’s reduced orchestration of the score, produces a notably sensitive sound under the baton of Lada Valešová. As with La rondine last week, it occupies the stage alongside the performers, thus making it an integral part of the ball scenes.

Details of West Green House Opera’s 2022 season will appear on its website in due course. The gardens at West Green House remain open for the majority of the year, and details of opening times and events taking place in them can be found on the designated website.