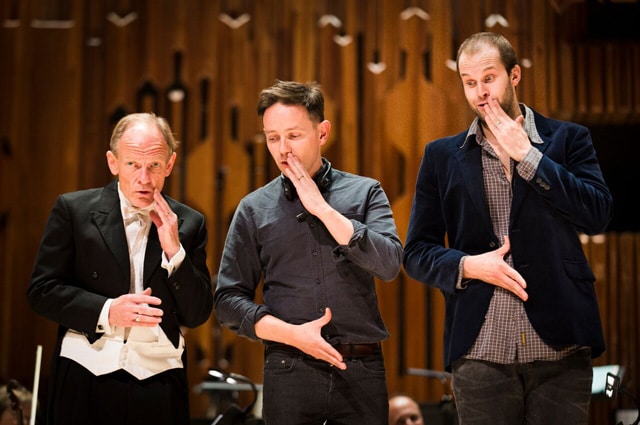 Although this performance of Purcell’s The Fairy Queen was billed as ‘semi-staged’, both music director of the Academy of Ancient Music, Richard Egarr, and artistic director of Silent Opera, Daisy Evans, were adamant that the concept is meaningless. Any staging works to the layout of the venue and the resources available, so the fact that this one was in a concert hall rather than an opera house and had a (presumably) smaller budget than a typical Royal Opera production was neither here nor there when defining its nature.

Silent Opera has a particular aim to make audiences feel embraced by the performance, and the hook on this occasion was to present the semi-opera under the pretence of ‘putting on an opera’. In this respect, it felt like Ariadne auf Naxos over two hundred years before that was written, although Cesti had broken the fourth wall in Orontea, three years before Purcell was even born, and Salieri was to do so in La grotta di Trofonio in 1785. As the audience entered the stage was being prepared for a performance with countertenor Iestyn Davies assuming the role of a tech guy and soprano Mhairi Lawson acting as a stage hand and sweeping under the harpsichord. The music struck up to even more hurried activity from everyone to get things ready. When the singing began soprano Rowan Pierce and bass Ashley Riches suddenly rose from the audience to perform as two stewards (also cast members) desperately tried to usher them back to their seats. And so the evening was to continue in this vein, with performers perching on stepladders or ‘improvising’ their next steps.

All this was very entertaining and made for a dynamic staging. The pretence was that everyone was in the middle of a rehearsal (with the orchestra still in civvies) before suddenly discovering there was an audience there, meaning that they had to start the performance. The fact that there is no reason why anyone would ever find themselves in such a position hardly matters. Purcell’s original was less about creating a musical version of A Midsummer Night’s Dream than about providing entertainment though a series of masques, with Shakespeare’s play really only acting as a loose backdrop for the occasion. In the same way, a staging today that heightens the interest in, and hence effectiveness of, these masques is more important than having the set-up strictly make sense.

The greater problem was that the idea was difficult to sustain for an entire opera, and there were times when it became monotonous to see yet another soloist pretend they were desperately sight-reading, or hurry to the conductor to ask what on earth was going on. Similarly, although the original is not so focused on revealing each character’s overall narrative arc, because in practice the masques in each act stand as virtually separate entities, the fact that we were constantly reminded that we were witnessing a performance did not help us to hook into the emotions of any individual character. Nevertheless, the staging still hit the mark more often than it missed it because on many occasions it did prove to be genuinely funny. For example, in Act III Iestyn Davies geared himself up to tackling the part of Coridon only to see Ashley Riches confidently come in singing it. This forced Davies to assume the role of Mopsa instead, so that (as we saw them) Riches was thoroughly prepared for his role while Davies was left improvising his, leading to a very awkward, and utterly hilarious, final pose.

The spoken text of the original was cut and in its place there was a narration consisting of Shakespearean verse. Sonnets were included, but parts did come from A Midsummer Night’s Dream while not necessarily reproducing the text as it was originally used in Purcell’s creation. Timothy West’s delivery proved his absolute brilliance as an actor, although the deliberate efforts to stumble over certain sections and hurry through others somewhat marred our ability to appreciate the meaning of, and beauty in, the lines he uttered. It was good, however, that Acts IV and V seemed to represent a significant shift in the way in which the evening was being presented. For the second half the orchestra did wear more formal black clothes, revealing how the shenanigans that had preceded the interval were not going to be reproduced in exactly the same way. Indeed, there was something deeply moving in the way in which Rowan Pierce sang ‘O let me ever, ever weep’ as one by one her fellow cast members extinguished the lights they carried and turned their backs on her, and in the way in which performers fixed wings, made out of coat-hangers, to each other at the end.

The music making was of an especially high standard and it was interesting to see how often Purcell’s wondrous score rose above the pandemonium of the performers scurrying about to stand as a beacon of etherealness amidst the chaos. That said, some dances, airs and symphonies were left to speak for themselves, being completely devoid of action or accompanied by just a little gentle movement. The cast, which included Rowan Pierce, Mhairi Lawson, Iestyn Davies, Charles Daniels, Gwilym Bowen and Ashley Riches also produced some divine singing, as each performer completely embraced the concept and conveyed their enthusiasm to the audience. This version was relatively short and snappy, lasting less than two and a half hours (including interval), and as a result it really did leave everyone wanting more.

For full details of its 2016/17 programme, visit the Academy of Ancient Music website.