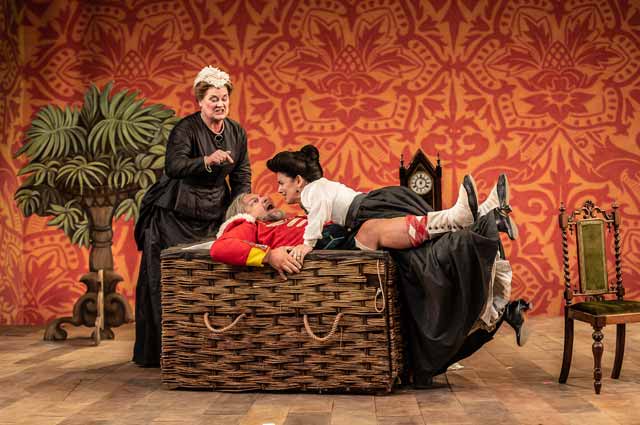 A list of today’s great Falstaffs might include Ambrogio Maestri and Sir Bryn Terfel, but, judged by his performance in Bruno Ravella’s new production of Verdi’s 1893 work for Garsington Opera, Henry Waddington’s name should be added without delay. His tremendous interpretation of the role sees him assert his strong bass-baritone to excellent effect, as he presents himself as a man who takes his light-hearted wit very seriously!

When Maestri played Falstaff in Robert Carsen’s 2012 production at the Royal Opera House, he presented him as a jovial, but physically quite dirty, figure. In contrast, Waddington’s Falstaff possesses, in comparative terms at least, a degree of distinction. Not only is this in keeping with the fact that he is still a Knight of the Realm, but it creates just enough of an upstanding character to make his frequent falls from grace all the more amusing. In his room in the Garter Inn lies a painting of him as a young soldier, and when he goes to meet Alice Ford he dresses in his old military uniform, which includes a kilt. The fact that he removes his boxer shorts from under it also makes for some hilarious moments when the women bundle him into the laundry basket and we are left to guess at what Meg Page is attempting to shield from her eyes!

His performance of his Act III monologue is handed such monumentality, as his railing against the world possesses real gravitas, that it becomes all the funnier when we realise that he is really complaining about being crammed in a laundry basket and dumped in the river. However, this ties in with his character because, although he revels in being a figure of wit who also brings out the wit in others, he takes his role extremely seriously and has a strong sense of self. His very essence is that of a large, jocular figure, which is why he declares that he has to eat in order to be himself. In the process, he arouses our sympathy so that when the townspeople trick him, here by dancing a maypole around him so that the ribbons rap ever tighter around his strung up body, we genuinely feel sorry for him. 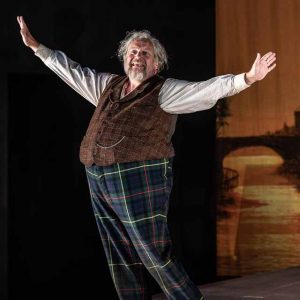 Waddington’s performance crowns a production whose lo-tech approach is probably its making. Setting the action in Edwardian England, Giles Cadle’s designs emphasise the theatricality of the set-up (and the fact that the opera derives from a play) by presenting a stage area complete with diminishing perspective and footlights. Three-dimensional objects such as a chandelier and train (Act I’s second scene is here set at Windsor Station) are painted on two-dimensional surfaces, while the backdrop to Falstaff’s room in the Garter Inn derives from Henry Pether’s ‘View of Windsor Castle by moonlight’ as if this is what can be seen from his window. The one slight disappointment is that by the time two large proscenium arches have been added to the front of the stage to enclose the area, it no longer feels as if the production is making use of the unique light and space that Garsington offers. Nevertheless, in Act III the back of the stage is opened out a little more to exploit its depth.

The staging is very slick, and the numerous touches excellent. Falstaff’s room at the Garter Inn is in an attic so that people rise from steps below the stage to enter it. The joke is taken further when Falstaff demands wine and a hand instantly appears out of the floor with a bottle. There is always amusement to be gleaned from Ford’s hyperbolic attempts to reveal Falstaff in his house, but here the scene is funnier than ever as he uses dynamite to blow up the screen that he believes Sir John is hiding behind. The effect is completed by Nannetta and Fenton, who are really there, sporting blackened faces when it collapses. In most productions, the person playing Falstaff has secretly slipped out of the laundry basket before anyone has even lifted it, and then his tipping into the River Thames occurs at the back of the stage so that we never see he is not there. Here, Waddington’s Falstaff remains in the basket, which is positioned so that we actually see him fall out of it down a hole and into the river below. This also makes it hilarious when at the start of Act III he climbs out of this same hole all wet, dirty and feeling sorry for himself.

The cast is uniformly strong, with Waddington’s own performance being matched by an equally engaging one from Richard Burkhard so that Falstaff and Ford’s scene together in Act II becomes something special. Mary Dunleavy’s Alice Ford and Victoria Simmonds’ Meg Page complement each other well, with the more flighty and brightly dressed Alice contrasting with a Meg who is shown to embrace the Temperance and Suffragette movements. There is some tremendous singing and comic acting from Adrian Thompson’s Bardolfo and Nicholas Crawley’s Pistola, while Yvonne Howard is simply a class act as Mistress Quickly. Colin Judson gets the evening off to a flying start as Dr Caius, Soraya Mafi is a spirited Nannetta and Oliver Johnston an effective Fenton.

The Philharmonia Orchestra, under the baton of Richard Farnes, is on extremely good form. On opening night there were a few initial balance problems between players and singers, with the consequence that the louder Waddington sang the softer he sounded because at the same moments the orchestra’s own volume increased exponentially. This difficulty, however, did not last long, and the orchestral output can be counted as another factor contributing to the success of an evening that culminates in an extremely polished performance of ‘Tutto nel mondo è burla’.