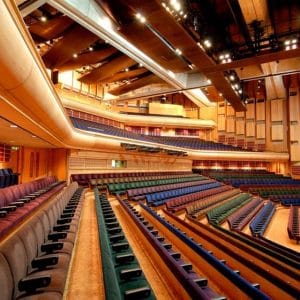 Largely thanks to the prevalence of “concept” directors in the theatre today, the music frequently comes second to the drama in operas. What a joy, therefore, to hear Verdi’s Falstaff in a concert performance to celebrate the London Symphony Orchestra’s centenary, unspoilt by the distractions of sets, costumes or pretentious direction.

The audience delighted in the opportunity to hear all the details of the score vividly played by the LSO under Colin Davis, who evoked the poignancy but more especially the wit of this story, which is based on Shakespeare’s The Merry Wives of Windsor and Henry IV. The Tudor setting of this opera has rarely been so vividly brought to mind, nor is the influence of Rossini on the almost eighty-year-old Verdi usually as brilliant as it was here.

Falstaff is Verdi’s final opera but only his second comedy (the first, Un Giorno di Regno, was a flop which nearly terminated the composer’s output). He had always wanted to return to a lighter genre, but it took the inspiration of a Shakespearean plot outline by Arrigo Boito, Verdi’s greatest librettist, to induce the ageing composer back into composition.

In this performance the wisdom of old age was sympathetically conveyed, though Colin Davis was in youthful form on the podium. The “Indian summer” he is enjoying with the LSO mirrors that of Verdi in his final bursts of inspiration (Otello and Falstaff), and this rare foray into the world of opera provided the orchestra with an opportunity to get its teeth into this highly dramatic music.

For these performances, Davis has assembled an international cast of high talent. Leading them was Michele Pertusi in the title role. After the first scene, in which he took a little time to warm up, his golden baritone shone through. His characterisation was perfect, and although he is not quite as plump as Shakespeare would have him, he clearly sympathises with the personality of the loveable rogue.

In both Quand’ero paggio and the Act Three monologue, he brought out every nuance of the vocal line, and led the closing fugue with panache.

The strength of this performance was not least a result of the brilliant four ladies of Windsor, all of whom clearly enjoyed every minute of their revenge on the title character. Especially fine was Ana Ibarra Nadal as Alice Ford; her interaction with both the other characters and Colin Davis was extremely engaging, and her soprano is secure in every register.

Jane Henschel as Mrs Quickly and Marina Domashenko as Meg Page were equally delightful, the former not least in her ironic curtsey to the word Reverenza each time she greeted Falstaff. Maria José Moreno in the role of Nannetta and Bülent Bezdüz as Fenton were also splendid, though perhaps more engaging in their love duet than elsewhere. Bezdüz was sadly over-stretched in his solo aria.

Crowning the cast was Carlos Alvarez as Ford, the jealous husband of Alice. His monologue, É sogno? O realta? (“Is it a dream or reality”), was delivered as well as one could ever hear it, and he managed to avoid being upstaged by the more appealing comedy of Falstaff.

The laurels must, however, go to Colin Davis for making the whole thing come together and creating so engaging a performance. In both the tricky set pieces that end each act and the more atmospheric passages such as the final scene in the woods, Davis brought his years of experience and obvious love of this music to one of the most honest accounts of the opera you will ever hear.

Happiest news of all is that the performances were recorded for release on the LSO’s bargain-price label. At £9.99, that has to be a must-have.