by Sam Smith
published: 30 May 2012 in Opera and Classical Reviews
Tweet 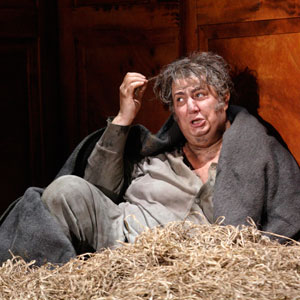 Although it is much loved, the playfulness of Verdi’s final opera, written when he was eighty, can divert attention from its musical and emotional intelligence. It almost requires more skill to write a piece that maintains a cracking pace throughout, and hence sees arias and recitative virtually merge into one, than it does to compose the most soulful, languid or popular operatic tunes. When, for example, Verdi tricks us into thinking we are about to hear a full lovers’ duet, only for it to be interrupted before taking flight, he reveals both his wit and his musical subtlety in making the joke work.

The achievement of Verdi and his librettist was to take the quintessentially English story of The Merry Wives of Windsor, and make it feel both appropriately English and Italian. This is something that Robert Carsen’s new production, created in collaboration with the Teatro alla Scala and Canadian Opera Company, also succeeds in doing by setting the action in the 1950s. Many opera directors warm to this era as the most modern period available that still maintains the social hierarchies of the original setting, and for Carsen this period of change in Britain was a ‘new Elizabethan age’. In Paul Steinberg’s sets, consisting of luxurious walnut panelling rising to the height of the stage, we see post-war British design in action, and yet something that might also pass for mid-century Italian.

Ambrogio Maestri, making his role debut at Covent Garden although he is already an experienced Falstaff, is brilliant in the title role. He is not initially the loveable rogue from top to toe, as his grubby long johns and persona give him a slightly stern and gritty edge. He still, however, captures the essential likeability of the character, emphasising that Falstaff needs be to fed to be who he is, positively enjoying his reputation as a womaniser, and ultimately proclaiming his own wit as a gift to the world. To say that Maestri booms to great effect would be true but misleading, for his voice is also capable of the utmost sensitivity and over the evening it generates a variety of well-nurtured effects. Equally magnificent is Marie-Nicole Lemieux’ Mistress Quickly, whose resonant voice complements her fine gestures as she ‘seductively’ curls her leg in a curtsey, licks cake mixture off a spoon, and hand feeds Falstaff his food.

The staging is highly dynamic, with effects ranging from the exceptionally subtle to the downright hilarious. When the quartet of women start taking over the Garter Inn’s dining room with their singing, other diners move tables in annoyance. The hunt for Falstaff in Ford’s house sees the chorus truly ransack the kitchen, and embark on a commando-style mission, before the scene reaches its perfectly judged climax. By Act III the audience is laughing before the curtain has risen more than a few feet as they spy the sodden Falstaff lying on the hay and the real horse Rupert, who is later to carry Maestri on his back, resting in his stable.

In the pit Daniele Gatti maintains a firm grip on the challenging score, and his precision and command radiate out to Ana María Martínez’s Alice, Kai Rüütel’s Meg, Amanda Forsythe’s Nannetta and Joel Prieto’s Fenton. Particularly impressive are the ensemble passages in Act I, Scene II, which involve two groups of four singers and demand perfect timing from every singer and player. Not all of the male vocal performances feel quite as strong, although this score may neither allow or demand certain types of voice to be shown at their best, but there is no disputing the comic timing of Falstaff’s henchmen, Alasdair Elliott and Lukas Jakobski.

The Royal Opera House’s Falstaff will be relayed live to fifteen BP Summer Big Screens around the country on 30 May, and broadcast on BBC Radio 3 on 30 June.