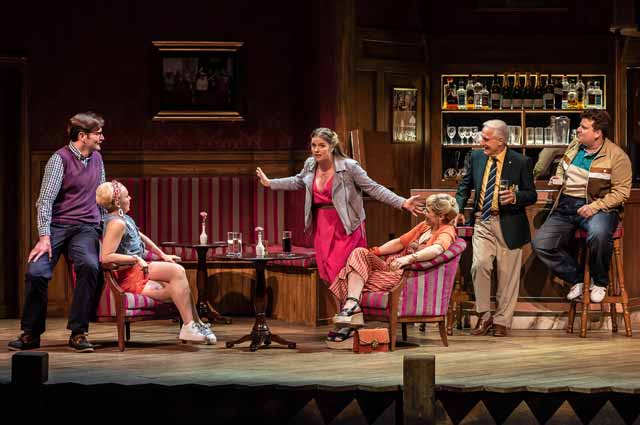 “It’s say funneah!” Indeed it is, and the young lady who opined thus seemed to be a ‘first timer’ in terms of opera. Falstaff was Verdi’s final homage to Shakespeare, and this production artfully shows how much of the playwright’s characterization and comedy have been brought out by both composer and librettist. Christopher Luscombe has created a real hit with his gently, appropriately updated setting and aptly directed singers, and the evening is the most entertaining so far of all the Summer Festival operas.

Simon Higlett’s set designs are a delight – the tavern is imagined as one of those plush-ish country town hotels, revamped to look like a gentlemen’s club, and it comes complete with bored bar staff, intrigued tourists and a ‘functioning’ lift. The Ford mansion is beautifully transformed into a riverside Cape Cod lookalike, including a ‘river’ upon which a steam-powered boat sails, and the interior is one of those kitchens which would no doubt be described as ‘stunning’ by estate agents. The forest is authentically spooky, and all is atmospherically lit by Peter Mumford. Karen Large’s costumes beautifully emphasize the characters’ personalities.

A superb cast has been assembled, led by Robert Hayward’s lovable, pompous, vulnerable Sir John, and Elin Pritchard’s ‘footballer’s wife’ / upmarket chav Alice. Both would be welcome on any international stage; Hayward’s powerful, golden tone and his crystalline enunciation gave constant pleasure, and as for Elin Pritchard, her singing was some of the finest we’ve heard recently. This is the creamy tone, ecstatic phrasing and honeyed delivery which mark out a true Verdian soprano, and one can easily imagine her as Violetta, or Elizabeth in Don Carlos. 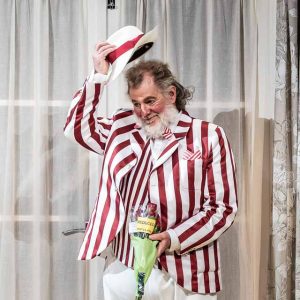 The cast is uniformly strong, with Susan Bickley outstanding in a classic interpretation of Mistress Quickly – ‘povera donna!’ hit just the right note of exaggeration without parody, and as always she was the complete team player in ensemble. Ford was winningly portrayed by Nicholas Lester, both in his nerdy accountant-like self and his pink-suited ‘Fontana’ persona, and his daughter Nannetta was given a sparking performance by Rhian Lois. Angela Simkin’s lively and lovable Meg completed an excellent quartet of ladies.

As Fenton, Alessandro Fisher sang with real Italianate ardour, his phrases meltingly sweet and his high notes effortlessly floated – it’s certain that we will hear a great deal more from this winner of the 2016 Kathleen Ferrier Award. It was a joy to hear that great Wagnerian Graham Clark in the role of Dr Caius, and Christopher Gillett’s sozzled Bardolfo and Pietro di Bianco’s sardonic, seedy Pistola were each as well characterized as he.

The Grange Festival Chorus entered wholly into the spirit of things, whether playing dubious workmen or crotchety fairies, and their singing was first rate. The Bournemouth Symphony Orchestra under Francesco Cilluffo equalled the on-stage standard, with effervescent playing which drove the ensembles forward and finely echoed the atmosphere of each scene.

There are so many amusing touches in this production, not least the Windsor ‘neighbour’ and her dog, and the state of Falstaff when he emerges, rubbish-strewn, from his dunking in the Thames. Verdi wrote that “Falstaff is a sad man who commits every sort of wicked deed… in a delightful way!… The opera is completely comical.” The Grange Festival has created a production which understands and respects the composer’s view.