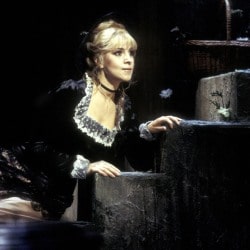 It seems appropriate that the Royal Opera should start its French-themed season with Gounod’s Faust, perhaps the grandest of all grand operas. Over the coming months we’re being treated to a mixture of the familiar a new production of Bizet’s Carmen in December – and the less familiar for instance, next week’s two concert performances of Halevy’s La Juive at the Barbican.

This second revival of David McVicar’s 2004 production of Faust has much to recommend it, including a five-star turn from Polish tenor Piotr Beczala in the title role.

But in the final analysis, McVicar’s valiant attempt to overcome some of the inherently staid and overblown elements of the opera isn’t a total success. As before, the mixture of styles and periods is totally jarring, and in the first half of the evening when the Prologue and the first three acts are played without a break each scene is so different that there is little coherence or overall direction.

For instance, we go from a (rather sketchily sung) scene on a French cobbled road that has the atmosphere of the French Revolution to a Moulin Rouge-style set for the Cabaret de ‘l’Enfer’, all within minutes. I know we’re meant to see Faust’s journey with the Devil as a kind of dream rather than reality at the end, Faust returns to his old self but emphasising the score’s highly closed musical numbers just fragments the opera and makes it hard to connect with or care about any of the characters.

Nevertheless, some of the musical performances shine through in spite of the production. Beczala’s Faust is an even more complex character than in the last revival, and his voice is to die for: grainy in the Prologue, lyrical in the love music and always having the stamina to reach for the highest notes (even when he was sucked down to hell). He’s clearly the tenor of the moment this is his fourth successive appearance at the House where he’s been the outstanding singer in the cast.

Orlin Anastassov took over the role of Mephistopheles from American bass John Relyea only a few weeks ago (though he’s played it in this production before), and he sings it remarkably comfortably. The voice took some time to warm up, making the Prologue seem almost interminable, but he grew in stature as the evening progressed. The famous Act II aria was properly entertaining, and the curses on Marguerite during her prayers in the fourth act were so menacing that the scene was the most electric of the evening.

There are many good things about Angela Gheorghiu‘s performance as Marguerite, but I still don’t think it’s the right role for her. Intonation during the Jewel Song was poor, and in general an awful lot of it lies too low. But when she was able to open up, we heard her at her best: both the opening of Act IV and the closing supplication to God in Act V were emotional and vocally dazzling.

Della Jones almost steals the show as Marthe Schwertlein she was certainly the only secure element in a very sloppy rendition of the quartet and Jette Parker Principal Liora Grodnikaite stood in for Christine Rice with great confidence. Young Artist Robert Gleadow was his characteristically strong self, and Russell Braun‘s debut as Valentin was impressively lyrical.

Dear me, though. Whereas Maurizio Benini almost persuaded me of the opera’s virtues in the last revival, this time his conducting leaves an enormous amount to be desired. The entire brass section was insecure throughout the performance, the strings’ tuning was dubious, and the coordination between stage and pit was quite poor in the first half of the evening. The chorus was under par, too, always behind the beat and lacking tone and clarity in the first act.

Yet despite the performance’s many troubles, Piotr Beczala’s turn in the title role is so phenomenal that everything else fades into insignificance. Go and hear him while you can.