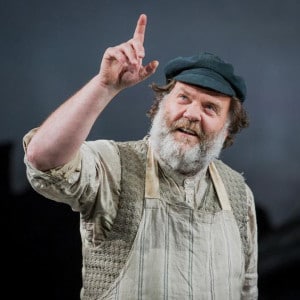 Grange Park Opera has certainly grabbed a few headlines by including Fiddler on the Roof in its 2015 season. If, however, its appearance in the schedule might have been classed as either a huge gamble or a media savvy gimmick, neither interpretation is borne out in the event. So well does the production fit into this intimate opera house set in the most bucolic of surroundings that it comes across as nothing other than a sound and appropriate choice for the season.

One might even suggest that this Fiddler could not have been staged anywhere else since it is Grange Park’s unique attributes that enable it to combine some of the best features of opera and musical theatre. The size of the house ensures that amplification is never required, while the use of the original, large-scale orchestrations (conducted here by David Charles Abell) is something that the purse strings would never have permitted in a lengthy West End run. If more might have been demanded from the stagecraft in a larger setting, Antony McDonald’s no nonsense approach to the direction proves entirely suitable for the venue.

The set consists of a huge screen at the front that shows Tevye’s barn and the entrance to his house. This frequently opens up to create every space required from the village streets to the inn where the wedding reception takes place. A series of backdrops also bring a further dimension to the settings. For example, the crooked and angular houses in the background of the external scenes say something about the ramshackle nature of life in the village of Anatevka.

Unlike in many modern stagings of musicals, chorus members are frequently kept as bystanders on the sidelines, which works on this scale by ensuring that we always focus on the central action and do not suffer from visual overload. The sense of community is certainly strong though, and comes to the fore in Lucy Burge’s choreographed numbers. These employ some professional dancers while also involving the entire ensemble, which creates the right effect because not everyone in the village would be a brilliant mover.

‘To life’ when Lazar Wolf celebrates his engagement to Tevye’s eldest daughter is strongly rendered as the dancing sees the Russians and Jews succeed in maintaining cordial relations on this happy occasion. Beneath the surface, however, it is obvious that the former try to assert their power with their dancing while the latter demonstrate a degree of defiance with theirs. ‘Tevye’s Dream’ is cleverly executed by seeing the ghosts appear mainly to him, but bringing Golde in just enough to introduce a sense of irony because how could she actually be involved in events that Tevye merely made up? The ‘Bottle dance’ at the wedding reception is just as impressive as the one in the 1971 film, even though there is no opportunity here for multiple takes and editing.

The advance selling point of the production was the appearance of Bryn Terfel as Tevye. If the pressure on him to deliver was high already it could not have been diminished by the surprise introduction to the stage of Topol before the curtain rose on opening night. Having taken the main part in the film and several Broadway productions, he remains many people’s idea of the definitive Tevye, and the audience clearly relished the opportunity to see him.

Terfel, however, does not disappoint as he knows how to shape his voice to suit this particular part. That alone is enough to create a strong performance, and so the fact that it is backed by such a world class bass-baritone instrument feels almost like a bonus. His acting is also highly engaging and he nails ‘If I were a rich man’. Supported by just a few simple props, he thoroughly commands the stage as he stands aloft two milk churns like a king before feeling the pain in his knees as he jumps back down to earth. It is generally accepted that every Tevye, including Topol, has closely followed the model established by the very first, Zero Mostel, but Terfel’s performance probably deviates more than most from this. While Topol presented his famous ‘on the other hand’ monologues snapping sharply from one thought to the next, Terfel adopts a slightly ponderous tone that creates a more natural impression of someone really thinking things through.

The remaining performers cross the divide between opera and musical theatre and by and large prove very strong. In particular, the trio of older daughters – Charlotte Harwood as Tzeitel, Katie Hall as Hodel and Molly Lynch as Chava – have pleasing voices that come to the fore in ‘Matchmaker, matchmaker’, while Hall also gives a moving performance of ‘Far from the home I love’. There are weaker moments too, however. Janet Fullerlove may be good as Golde in her own right, but ‘Do you love me?’ represents the one song whose effect is marred by the obvious disparity in singing abilities between her and Terfel. The musical itself also suffers from most of its hit tunes coming in the first half so that the second can drag a little.

Nevertheless, the sight and sound of the crowd crying ‘Tradition’ and ‘Anatevka’ as they confront us en masse is extremely poignant. The same singers are performing in both Fiddler and Eugene Onegin this year and they ensure that the chorus is imbued with operatic strength. In fact, the power that is wrought as they merely stare out at us would seem to encapsulate the production as a whole, which is undoubtedly simple and yet unequivocally effective.

A semi-staged version of this production will be performed at the BBC Proms on 25 July. Advance tickets are sold out but returns may become available, while early queuing is advisable to obtain one of the £5 standing day tickets. For further information visit the BBC Proms website.