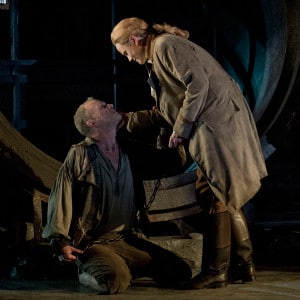 It was fitting that this wonderful production of Fidelio should open this 25th anniversary season at Garsington: not only because it shows the company at its best, but also because it was the production with which Douglas Boyd, now the Artistic Director, made his Garsington debut – and of course Beethoven’s great work fits in so well with the themes of Freedom and Justice being celebrated in the Peace in our Time weekend, which culminates in a performance of the Ninth Symphony.

John Cox’s production does everything right, so much so that you almost want to whisper “Yes!” at many points. It’s not the big moments – though they are marvellous, too – but the little ones which show a true opera director at work. When Rocco says ‘Do you think I can’t see what’s in your heart’ do the cast all get comfy for their big quartet? Do you hear the orchestra’s strings loudly? No, and no again – the other three show in their faces that he cannot, and each seems to tremble on the edge of a devastating realization, and you have to strain to hear those aching pulses on the strings, replicating so exactly the beating of their hearts.

When the prisoners are released, do they march out in immaculate white boiler suits and arrange themselves decoratively as if they were about to do a spot of Yoga? No, they don’t – they crawl out of their dungeons, blinking at the light, and then, in a wonderful touch possible only in this unique theatre, they are led into the gardens where they variously stand in amazement at the flowers, pluck handfuls of grass, or lie prostrate on the sun-warmed soil – ‘…in freier luft, den Atem leicht zu heben!’

When Leonore and Florestan are re-united, do they sing their duet from twenty paces away, as if they were about to end it in a duel? No, they don’t – they come about as close as two singers can get without acquiring very wet faces, and they actually seem enraptured at the very idea that they are together again. I could go on, but you get the picture; this production bursts with feeling, it is rooted in the true meaning of personenregie – and the singing and playing are on the same exalted level.

Rebecca von Lipinski is a totally credible Leonore, soft-voiced in the Janowitz manner yet with plenty of might in reserve, and ‘Komm, Hoffnung’ was given with exact attention to the words and warm, burnished tone. Every sentence of her dialogue pulsated with sensitivity. Peter Wedd sang Florestan with truly heroic tone and unflagging line, his phrasing and manner ideally direct; he was absolutely believable as a starving prisoner, which is no small feat when you have to belt out an aria like ‘In des Lebens Frühlingstagen.’ They were supported by a cast it would be hard to better anywhere, especially Jennifer France’s Marzelline, singing her aria and launching ‘Mir ist so wunderbar’ with impassioned phrasing and stylish delivery, and Stephen Richardson’s intensely humane Rocco, wonderfully sung by a bass in whose voice it’s easy to hear a future Hans Sachs.

Darren Jeffery delivered a superbly nasty Pizarro, cruel and credibly vengeful – he got some character-directed boos at curtain-call, surely evidence of his success – and Joshua Bloom was a noble Don Fernando, giving proper weight to that great moment at ‘Euch, edle Frau allein.’ Sam Furness made you feel his plight as Jaquino, and David Woodward and Jan Capiński sang movingly as First and Second Prisoners. Those prisoners were as fine a chorus as you could hope to hear – such thrilling sounds from so young a group bode well for Garsington Opera’s future.

In the pit, Douglas Boyd directed the Garsington Opera Orchestra in a performance which showed not just the intimacy with this work for which he is already known, but an ability to bring out the best in the players which would not disgrace many much larger houses. From the delicacy of the strings in the great quartet to the triumphant horns at the finale, it would be difficult to imagine better playing. This is a Fidelio which you should not miss.