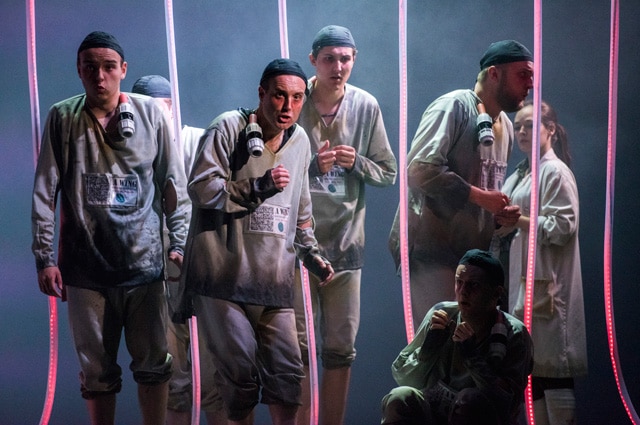 In this production of Fidelio director Orpha Phelan and designer Madeleine Boyd, who won the award for Best Opera Production at the Royal Danish Opera in 2016, both make their Longborough debuts. Their interpretation is undoubtedly spirited and innovative, but one cannot help feeling that if they had been even bolder in presenting their ‘post-apocalyptic vision’ of the work then the evening would have actually felt stronger.

Phelan and Boyd began with what they saw as difficulties, both with the work and their ability to stage it at Longborough. They believed that the opera never really explained the origins of Don Pizarro’s feud with Florestan; that Leonore getting away with disguising herself as a man stretched credulity, and that Longborough’s stage did not lend itself to creating prisons with the infrastructure of walls and bars that this would require. To them a futuristic setting circumvented these problems because ‘if people don’t have to identify themselves as male/female’ in the same way today as they did in the late eighteenth century then who is to say that gender will not become even ‘more flexible’ in years to come? Similarly, in the future physical barriers may not be required to detain prisoners at all.

In this way, during the Overture we see the prison looking like some form of futuristic laboratory where workers manufacture possibly illicit goods. Florestan sneaks in and ends up holding Don Pizarro at gunpoint when the latter discovers him. Guards manage to capture Florestan but not before he has let off a shot that wounds Don Pizarro. In this way Act I begins two years later with Florestan having been held prisoner ever since, and Don Pizarro now in a wheelchair as a result of the injury he incurred.

In fact, given all that we see, one interpretation might be that Don Pizarro is running an underground company in which people are held prisoner so they can be experimented on, and illegal ‘wonder drugs’ are produced on the back of this. Florestan has detected the misdeeds occurring, sneaked in to try to expose them and ended up being caught. If this were so, however, it would require the bold step of not setting the drama in a prison at all. Here, however, the dialogue (which is delivered in English with ‘updatings’ to fit the setting) reveals that we are still in one, while it seems that these are prisoners who are ‘held in place’ by being drugged up, thus providing no direct link between them and a manufacturing racket. Therefore, while the staging alludes to many of the aforementioned ideas, it does not add up to a coherent scenario. This is disappointing because in highlighting the incredulity of Leonore disguising herself, or the lack of a back story between Florestan and Don Pizarro, the production suggests that these things matter. However, the anomalies that arise out of the loose set up that has been created could only ever be passed off on the grounds that certain things don’t matter. 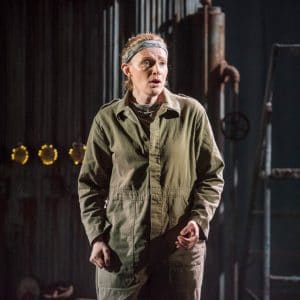 ‘O welche Lust’ simply sees the prisoners being ‘unplugged’ from the generator to which they are all ‘wired up’. In a prison without walls this simple act is the equivalent to seeing them roam free in the gardens, but it does not conjure up the images of light and fresh air to which the words and indeed the music allude, and the chorus sound is not helped by keeping the prisoners at the back of the stage throughout.

There is a lot that still works with the staging, including the atmosphere that is created through the positioning of a large ‘futuristic’ generator at the centre of the space. The wings are left open so that the rigging and lights can be seen, which contributes to the overall ‘dystopian’ feel, while Wayne Dowdeswell’s lighting designs are excellent. The character of Rocco is also very well developed so that he feels like a real human being rather than just a caricature. In Act II, however, it feels as if the concept has more or less been forgotten. There are a few innovations such as replacing digging the grave with preparing a trough of acid to dispose of Florestan’s body, and reviving Florestan through CPR once Don Pizarro has been exposed, but in terms of the way in which the drama is played out there is little to distinguish this new setting from the original one.

French-Israeli conductor Gad Kadosh, who made his UK opera debut at Longborough in 2015 with Rigoletto, conducts well. He takes much of the work at quite a pace, which can present some challenges for the singers, but since they do meet all of them the results are very effective. The principals are good with virtually all of them growing in strength as the evening goes on. As Leonore, Elizabeth Atherton produces a very clean, pure and accurate sound while Simon Thorpe and John Paul Huckle demonstrate security and power in their respective baritone and bass ranges as Don Pizarro and Rocco. As Florestan, Adrian Dwyer is persuasive from his first note, and his performances of ‘Gott! Welch Dunkel hier!’ and ‘In des Lebens Frühlingstagen’ are notable for the strength of both his expression and technique, while Lucy Hall, Sam Furness and Timothy Dawkins provide sound support as Marzelline, Jacquino and Don Fernando. If the musical credentials are good all round, certain moments are outstanding. For example, the performance of ‘Wer ein holdes Weib errungen’ at the end reveals power, balance and the effective delineation of each line. When all of this is achieved with the chorus being taken at quite a pace the results are truly thrilling.

Longborough Festival Opera’s 2017 season continues until 1 August, with one further performance of Orfeo ed Euridice taking place in London on 4 August. For details of all events read our preview.