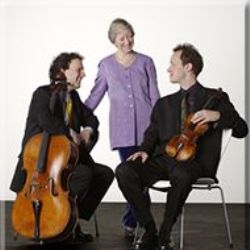 There is perhaps no greater atmosphere on London’s classical music scene than a packed house at the Wigmore Hall.

Its central location, fabulous acoustics, and its friendly and knowledgeable audiences ensure its place among the UK’s finest chamber music venues.

Not only do some of the world’s most distinguished musicians continually wish to play in this ideal setting, but more often than not they respond to it with exceptional performances, as witnessed on Saturday evening with an exhilarating concert by the renowned Florestan Trio.

The centrepiece of the evening’s music making was Schubert’s monumental Piano Trio No. 2. With its alluring melodies and sumptuous harmonies, all within a grand scheme of E-flat major, one is accustomed to hearing this work performed with a pervading sense of spirited joy and happiness. The Florestan Trio, however, turned this notion on its head. Delight was replaced with despair; moments of light were substituted for moments of darkness. This reading, perhaps derived from biographical context (the second Piano Trio was written in the final years of Schubert’s life, when the composer’s health was rapidly deteriorating) ploughed the depths of meaning and understanding in this work, portraying it in a different and distinctive manner.

This weighty interpretation was most evident in the final Allegro moderato. Though the movement was always lively pianist Susan Tomes‘ semiquavers were played with great verve, and the contrast between soothing legato and crisp staccato was attractively rendered the fractionally slower than conventional tempo, combined with more deliberate articulation, gave the performance a feeling of wistful nostalgia as opposed to reckless abandon. The final shift from E-flat minor to E-flat major at the work’s end, rather than representing a release from the trials and tribulations of the previous four movements, was instead a strikingly solemn acknowledgement of what had gone before.

The first and second movements were subject to renditions of equal gravity. Indeed, much of the material in these movements lends itself to a more sober approach (the second theme of the opening Allegro and the entire slow movement are two particularly apt examples). Only in the Scherzo did the Florestan Trio’s reading fail to convince, as the music felt somewhat underplayed. Another slight reservation was that ‘cellist Richard Lester‘s tone production was often overwhelmed by his two counterparts. This may have been a question of Lester’s delicate shaping, as he often allowed his phrases to tail off too much, too soon. That said, his sound quality was generally uplifting, as was that of the magnificent Anthony Marwood.

The attractive, ingeniously selected programme had begun with Dvork’s highly underrated first Piano Trio, in B-flat major. Beethoven and Brahms are often viewed as the direct musical predecessors of the Czech composer. However, a strong case can be put forward for Schubert’s influence on Dvork, much of which can be heard in the Trio’s uninhibited harmonic twists and melodic turns.

This was a captivating performance in every regard, full of character and energy. These qualities were at their most prominent during the vigorous Finale, which was delivered with dashing vitality. For all three musicians this movement presents significant technical challenges, all of which were risen to with consummate ease. Particularly impressive was Lester’s control of Dvork’s sometimes unidiomatic ‘cello writing, as well as Tomes’ performance of a piano part that is nothing short of virtuosic. While the fourth-movement return of the main theme from the Adagio molto e mesto lacked a desirable eeriness, there were countless other magical moments to savour. The lamenting slow-movement proper was full of passionate emotion, and time seemed to stand still during the final, haunting restatement of the theme. The opening Allegro molto was performed with a refreshing sense of urgency and restlessness, whilst the cheeky outer sections of the third-movement Allegretto scherzando were offset by some beautifully sensuous playing in the tonally distant trio section.

The Czech connection was maintained before the interval with a performance of Petr Eben’s well-crafted (if somewhat unmemorable) Piano Trio, composed in 1989. The composer’s approach to the combination of piano, violin and ‘cello was an interesting one: rather than viewing the instruments as a trio, he sees the combination as one of two opposing forces, these being string duo and piano. The Florestan Trio brought these contrasting elements to the fore, displaying an unwavering tension between strings and keyboard in each of the work’s four movements. A great emphasis was also placed on the many stark and unconventional timbres employed by the composer, allowing the performers to fully display their versatility.

This was an outstanding concert, and served to confirm that the Florestan Trio are a leading chamber ensemble whose concerts are not to be missed on any account. Quite simply, their next appearance at the Wigmore Hall cannot come soon enough.